I brought so many library books home in the last month that I had to take two separate photos. The holidays are a great time to finish up reading projects for the year and start in on new ones. Between the usual energy that generates and a knee injury that kept me on the couch most of the first week of the new year, I was very happy to have these books at home. 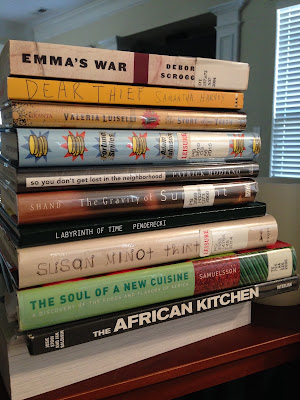 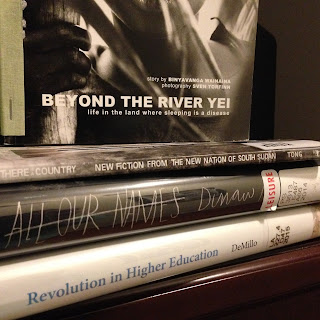 by Samantha Harvey
The Story of My Teeth

by Adam Johnson
So You Don't Get Lost in the Neighborhood

by Patrick Modiano
The Gravity of Sunlight

by Rosa Shand
Labyrinth of time: Five addresses for the end of the millennium

by Susan Minot
The Soul of a New Cuisine: A Discovery of the Foods and Flavors of Africa

by Marcus Samuelsson
The African Kitchen: A Day in the Life of a Safari Chef (Cookbooks)

by Josie Stow
Beyond the River Yei: Life in the Land Where Sleeping Is a Disease

by Binyavanga Wainaina
There Is a Country: New Fiction from the New Nation of South Sudan

by Dinaw Mengestu
Revolution in Higher Education: How a Small Band of Innovators Will Make College Accessible and Affordable

by Richard A. DeMillo

I was able to finish the winners of the Nobel Prize for literature and the National Book Award from 2015 before the end of 2015 - that's the Modiano and the Johnson. I really enjoy Johnson but probably loved his last novel more. Four out of six of the stories were excellent.

I learned of the Luiselli and the Harvey from the longlist/watchlist from the Tournament of Books that happens in March. These were 2/3 of the first books I read in 2016. For both I felt I was reading something I hadn't read before, a little bit of freshness in there, probably a bit more successful for the Luiselli than the Harvey in the way that it is more varied and moves through stages.

I brought home the DeMillo after it spent a few weeks on my desk over the holidays. I was supposed to be reading and discussing a chapter a week over on Bryan Alexander's blog (he is hosting a readalong) but I got behind the first week of December. Since bringing it home I've read... one more chapter. Darn. I think the book is technically "done" as far as discussion goes, and I am late to the party for the second half.

When helping mark books for a collection weeding project in the music library, I ended up checking out the Penderecki to make sure it didn't get weeded. I haven't cracked the cover yet.

One of my major reading goals for 2016 is to finish reading a book from every country in Africa (you can hear more on my goals podcast episode) so many of these books are related to that project. The Scroggins, Tong, and Wainaina are from (the Republic of) South Sudan, a very new country in the scheme of things.  The Shand, Minot, and Mengestu are set in Uganda. The Shand and Mengestu are set in roughly the same time period, the overturn of the government in 1971, while the Minot is set during a traumatic event in 1996. (As I was putting this post together I read a lot of negative reviews about the Minot, making me wish I instead had the non-fiction version of the story which many people feel she "stole.") The cookbooks are for the African project too, although I was not too thrilled by either of these.

Which books are you excited to read, either from the library or that you have purchased?
Posted by Jenny Colvin at 10:42 PM