Mud Sweeter than Honey: Voices of Communist Albania by Margo Rejmer
My rating: 5 of 5 stars

This upcoming translation from Restless Books is so absorbing that I could not put it down. Albania doesn't get a lot of attention and I didn't know much about it - it turns out that was intentional as the country was cut off from the rest of the world for so long. Scholars consider it the harshest Communist regime. The author conducted years of oral history interviews and used them to tell a larger story of a country under the heaviest heel. She includes a wide range of experiences, but of course interviews can only share the experience of survivors.

The writing and translation are stellar, making a very readable work, apart of course from the violence that is depicted. I've been talking about it to everyone around me since I finished reading it.

I had a copy from the publisher through Edelweiss; it comes out November 2.

View all my reviews
Posted by Jenny Colvin at 2:11 PM No comments:

Reggie is back for a horror-specific episode, just in time for the second half of October. We discuss what works for us in horror (and what doesn't) and share a few books that have gotten under our skin.

Download or listen via this link:
Reading Envy 231: Psychological Terrorism 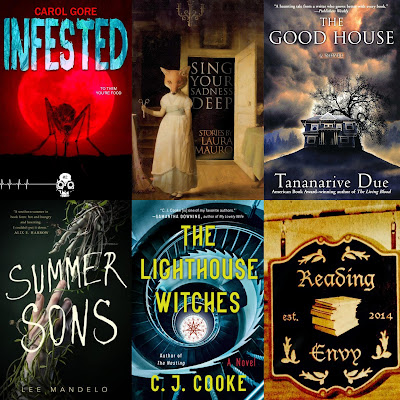 Infested by Carol Gore
Summer Sons by Lee Mandelo
Sing Your Sadness Deep by Laura Mauro
The Lighthouse Witches by C.J. Cooke
The Good House by Tananarive Due

Meridian by Alice Walker
My rating: 4 of 5 stars

I read this for the #1976club challenge in the blogosphere hosted by Simon and Karen - this aligned with the goal to read more books by Black women, although I've read Alice Walker before, both novels and poetry.

Meridian is a woman who feels a calling to not live a normal life but to centralize her body in protest and defiance. It's the 1970s and she lives two hours from Atlanta (some of the novel is at a college in Atlanta, but the timetable of all of it is a bit chaotic) - the south is seeing the fallout of desegregation (communities taking revenge by filling in pools, firing black teachers, etc) and Meridian also spends a lot of time trying to convince people to vote. She's a pretty memorable character, in one of those in between time periods I always feel I don't know enough about.

View all my reviews
Posted by Jenny Colvin at 8:37 PM 1 comment:

Maybe Esther: A Family Story by Katja Petrowskaja
My rating: 3 of 5 stars

KATJA PETROWSKAJA was born in Kiev, Ukraine; studied literature at the University of Tartu, Estonia; and conducted her PhD research at Columbia and Stanford Universities. She completed her PhD at the Russian University for the Humanities in Moscow. Since 1999, she has lived and worked as a journalist and columnist in Berlin. Maybe Esther is her first book, which was awarded seven international prizes and translated into nineteen languages.

I enjoy a good research narrative and that's really what this is - more than a memoir, as the author is only barely present in the book, it's the story of Katja's family members, as she traces them through the historical events that forced relocation. Most of her family members were Jewish and lived in Poland, Ukraine, and Russia, with forced moves into Austria and Germany for some. The research takes her to Soviet archives, concentration camp historians, an old rabbi who knew a family member, a former student of the "deaf-mute" schools her family members were known for establishing, and even a former landlord.

There is some reflection by the author on places that do not seem to acknowledge the atrocities that occured where they are. Kiev really stood out this way, where 13k+ Jewish people were killed in two days but the statues of commemoration of that period are about local war heroes instead.

While I found the contents and approach unique, the book took a while to get through, largely due to its fragmentary nature and problematic formatting in the Kindle eBook version (which I paid for, not an ARC.)

My book club read this for September and I missed the discussion but it sounded like it had an overall positive response. I am also counting it for my Europe2021 project.

View all my reviews
Posted by Jenny Colvin at 11:26 AM No comments:

Living in Hong Kong has given Ross a different pandemic perspective, and has shifted his reading life in ways we discuss during this episode, as well as discussing books we've read recently. I'm just a bot, though.

Download or listen via this link:
Reading Envy 230: Iron Bubble 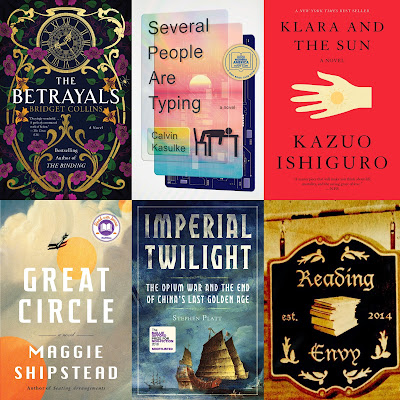 The Lighthouse Witches by C.J. Cooke
My rating: 4 of 5 stars

This is the second witchy book I've read recently based on a mention on another book podcast (this was on the October most anticipated books episode from Professional Book Nerds even though they had a witchy books episode two prior; I read Cackle after the mention on Smart Bitches, Trashy Books.)

The Lighthouse Witches takes place on an island off the west coast of Scotland (for some reason it's never called the Hebrides in this book.) A mother moves there to paint a mural inside a lighthouse and uproots her daughters to do so, but then they disappear. The island has a long sordid history including witchhunts and missing children, and the author has used a lot from Scottish folklore and history.

Most people know I'm a sucker for a novel set on a cold weather island and what is better for spooktober than a witchy dreary read? This comes out Tuesday, October 5, 2021.

View all my reviews
Posted by Jenny Colvin at 11:40 AM No comments: