Courtney is back and before we jump into discussion of books we've read and liked recently, we discuss how our reading has changed over time.

Download or listen via this link:
Reading Envy 238: Inanimate Objects 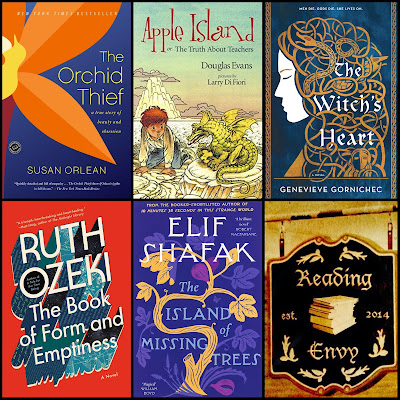 The Witch's Heart by Genevieve Gornichec
The Island of Missing Trees by Elif Shafak
The Orchid Thief by Susan Orlean
The Book of Form and Emptiness by Ruth Ozeki
Apple Island: Or the Truth about Teachers by Douglas Evans

Washington Black by Esi Edugyan
The Starless Sea by Erin Morgenstern
Picnic in the Ruins by Todd Robert Peterson
The Gene: An Intimate History by Siddhartha Mukherjee
The Emperor of All Maladies by Siddhartha Mukherjee
Five Days at Memorial: Life and Death in a Storm-Ravaged Hospital by Sheri Fink
Ragnarok
Norse Mythology by Neil Gaiman, read by Neil Gaiman
The Library Book by Susan Orlean
The Food Explorer by Daniel Stone
Seeds of Blood and Beauty by Ann Lindsay
A Tale for the Time Being by Ruth Ozeki
The Bear and the Nightingale by Katherine Arden
Ariadne by Jennifer Saint
The Emotional Life of the Toddler by Alicia F. Lieberman
The Anna Karenina Fix: Life Lessons from Russian Literature by Viv Groskop

Download or listen via this link:
Reading Envy 237: Reading Goals 2022

Reading Envy Russia - shared folder with challenge documents, etc.
Reading Envy Readers - discussion in Goodreads (join the group)
The Possessed by Elif Batuman
Anna Karenina by Leo Tolstoy
War and Peace by Leo Tolstoy
The Brothers Karamazov by Leo Tolstoy
The Master and Margarita by Mikhail Bulgakov
Lolita by Vladimir Nobokov
Eugene Onegin by Alexander Pushkin
Oblomov by Ivan Goncharov
Untraceable by Sergei Lebedev
Oblivion by Sergei Lebedev
Zuleikha by Guzel Yakhina
Brisbane by Eugene Vodolazkin
An Evening with Claire by Gaito Gazdanov
A Swim in a Pond in the Rain by George Saunders

Suggestions for Final Countries in Reading Around the World

My last post was about how I am so close to finishing my project now over ten years in the making of reading a book from every country plus as many island/standalone territories that are geographically unique from their parent countries as I can. I got a lot of suggestions and someone suggested I post them somewhere, so here we go.

Dancing in the Mosque @pleasepeas

Kite Runner (I actually have this on my shelves, I read his more recent book before 2012) - @ilibbyyoung and @lauren_o_reads

Small Country @lauren_o_reads (And me realizing I own this!)

The Bitter Side of Sweet @lauren_o_reads

An African in Greenland @end.notes

At the Bottom of the River @lauren_o_reads

The Country Under My Skin by Gioconda Belli  @thescienceofreading and @robinlgustafson

Saint Vincent and the Grenadines

Posted by Jenny Colvin at 11:05 AM No comments:

Email ThisBlogThis!Share to TwitterShare to FacebookShare to Pinterest
Labels: aroundtheworld

Reading Around the World - The Completist

In 2021, I read 19 more places I had on my unread list, most of them in Europe, but I also crossed off Kazakhstan, Lesotho, Malawi, Mauritania, Belize, El Salvador, Panama, and Puerto Rico (yes I know this is technically USA but following my rules it is also separate).

Here is what remains, first the map and then the list. I welcome any and all recommendations, although I always prefer authors from the countries and set there. I'm sticking to my original rules where only books I've read since my project began count, but a few countries on the remaining list are taunting me, for instance Afghanistan, which I have read at least twice, but prior to 2012. I've also read books that might include one of these countries but if it isn't the full focus, I don't count it (otherwise Sovietistan would have crossed off a couple!) Some of these places may not even be on my list accurately ten years later. 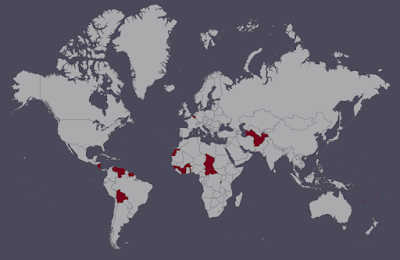 Saint Vincent and the Grenadines

Posted by Jenny Colvin at 1:00 PM No comments: 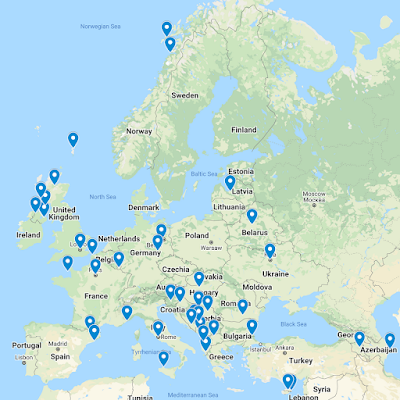 Heading into another year of reading around the world in 2021, I decided to turn my focus on Europe. I had a few goals with the focus:

1. To get to the countries I hadn't read yet. And Europe has a lot of random countries!

I did get to 11 locations (mostly countries, some places that are separate from the countries they "belong to") I hadn't yet read, so that felt pretty great. I read 44 overall, which was 16% of my reading for 2021, so I did really devote a considerable amount of time to doing this.

I did also clear out a hefty chunk of my backlog of print books, but of course the siren song of new books is always strong. Did I get to all of the print books I wanted to? Well no. I haven't decided yet if I'll keep those that I have left or not. I'll probably decide that title by title.

I did have a few favorites - A Spare Life for fiction and Mud Sweeter than Honey for non-fiction. 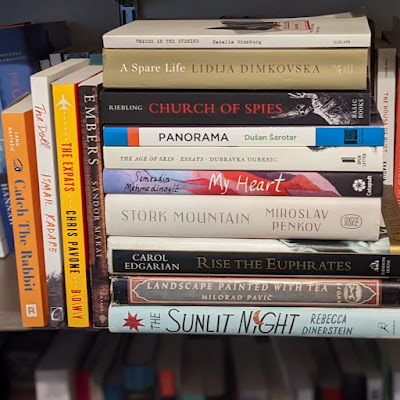 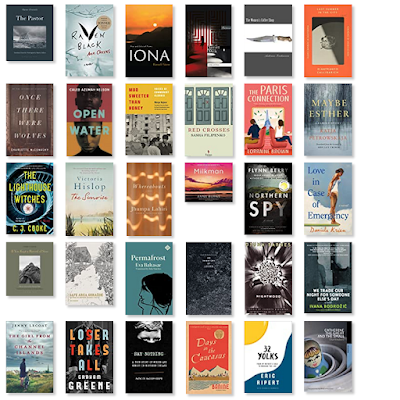 Here's the full list! Keep in mind that I've been reading around the world for 10 years, so I have previously read quite a bit of Europe. You can view my extensive location shelves in Goodreads.

The Doll by Ismail Kadare
Mud Sweeter than Honey: Voices of Communist Albania by Margo Rejmer

Rise the Euphrates by Carol Edgarian

Azerbaijan
Days in the Caucasus by Banine

Catch the Rabbit by Lana Bastašić

My Heart by Semezdin Mehmedinović, translated by Celia Hawkesworth

Croatia
The Age of Skin by Dubravka Ugrešic

An Inventory of Losses by Judith Schalansky

Love in Case of Emergency by Daniela Krien

Say Nothing by Patrick Radden Keefe

Last Summer in the City by Gianfranco Calligarich

Voices in the Evening by Natalia Ginzburg

Jersey, Isle of
The Girl from the Channel Islands by Jenny Lecoat

The Expats by Chris Pavone

Loser Takes All by Graham Greene

Catherine the Great and the Small by Olja Knezevic

Norway
The Pastor by Hanne Ørstavik; translated by Martin Aitken

If You Kept a Record of Sins by Andrea Bajani

The Lighthouse Witches by C.J. Cooke

Posted by Jenny Colvin at 10:42 AM No comments: