Review of The Best of Connie Willis: Award-Winning Stories

Connie Willis is a writer of ideas. In longer novel form, I think this is a good thing; I enjoyed Blackout/All Clear quite a bit. I still haven't made it to her earlier works like To Say Nothing of the Dog or The Doomsday Book - both books that others say are her best work. When this collection of stories was listed in NetGalley, I jumped at the chance, to try to get to know this Grand Master a little better.

Back to this ideas issue. Connie Willis often zooms in on a thought she has (What if we found a way to turn off the menstrual cycle? This becomes Even the Queen) or personal obsessions (A love affair with the London Underground becomes The Winds of Marble Arch, an interest in H.L. Mencken becomes Inside Job) and fleshes it out into a story. The problem for the reader occurs when he or she does not share this same obsession. Honestly, I don't understand the obsession with H.L. Mencken, so that was an automatic turn-off for me. I did enjoy Even the Queen though, with its continuation of concepts in the Handmaid's Tale by Margaret Atwood (kind of the opposite scenario).

The other stories range from quantum physics to post-apocalyptic letters to aliens that respond to Christmas carols. All ideas that are explored in the length of a short story. Each story comes with an afterword written by the author, explaining where the idea comes from and why the story is significant in her eyes, great stuff for fans of her work.

So what is missing, and why am I only giving this three stars? (Three stars for me means decent but not really for me.) I suppose I expect more from a short story. I want beautiful, expressive language. I want depth of character and emotion. Ideas alone just don't cut it, and that's all I really find here. For a lot of readers, that will be more than enough.
Posted by Unknown at 10:54 AM No comments:

Beach Reads (or Infinite Jest and a Bikini Body)

There is a meme going around today about Beach Reads.  I've skimmed a few of the posts, and as I suspected, most people are focusing on lighter reads - quick paced, shorter, engaging but easy to pop in and out of.

I guess I feel differently.  When I make it to the beach, I have more time to read than ever before.  Hours at a time, when I'm lucky.  The waves and the wind and a book.  Why wouldn't I use that opportunity to read something hefty; something that made me think? 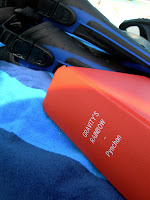 A few years ago, I brought Gravity's Rainbow along with me on a cruise.  It is pictured here on a somewhat sandy towel and drying flippers from snorkeling.  I picked this book to read during swimming breaks, and because of that I'll always remember Pynchon being in that atmosphere (until I read it again.)

There have been a few bloggers talking about a "bikini body" lately, at least in the world of blogs I follow.  Their posts are along the lines of, "Want a bikini body? Put a bikini ON YOUR BODY."  The fearless blogger that drives the point home best (illustrated) is the Militant Baker in her post "How to Get a Sexy Swimsuit Body in Under 5 Minutes!"

This summer, my main read is Infinite Jest.  If I go to the beach, it will become my beach read.  It has also been my dentist read, my coffee shop read, my nail-drying read.  As I mentioned before, I am reading it inside of a vibrant community of readers all summer long.

Okay, if it makes you feel better, I'll give it a bikini. 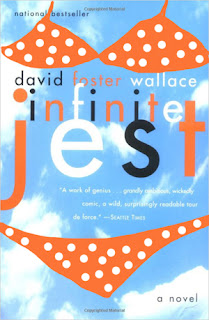 There you go!  Now David Foster Wallace's Infinite Jest is ready to be a beach read.  Pick up a copy for your vacation today!

Embarking on a Summer of Jest

The last time I read and blogged a mighty tome, it was the late summer of Ulysses in 2011. It was a satisfying experience, more so just to finally finish it, and this summer, starting today, I am finally going to read Infinite Jest

I am not going to go it alone.  Summer of Jest was started by one ambitious reader, a similar project to Infinite Summer of 2009, and it quickly spread.  Now it is a presence in a blog, in Twitter, in Facebook, and Goodreads.  I've talked a few people into joining me, so we'll see how long they stick around.  If you stumble across this blog post, you may join us too!

I thought I'd start out by discussing my previous experience with David Foster Wallace.  I had him on my to-read list before he died in September of 2008, prompted by a friend whose opinion on books I value very highly, but his passing prompted me to get started.

My first book of his was Consider the Lobster and Other Essays, which I read in October of 2008. The most memorable essay from this volume is the title essay.  It exposes that lobsters actually do feel pain, and die excruciating deaths when they are going to be eaten.  I have spent the last twelve years fluctuating between veganism, vegetarianism, and eating fish, but I'm not sure I've actually consumed lobster since reading that essay.  He is a powerful non-fiction writer, who isn't afraid to include his own experience as part of the narrative.

A month later in November 2008, I read A Supposedly Fun Thing I'll Never Do Again, which I posted a review of in Goodreads.  The title essay was about cruises, and I'd had enough cruising experience to know exactly where he was coming from.  At the time, I felt it was strange to have a self-confessed agoraphobe writing about experiences that most people get enjoyment out of because of the people in the situation, and his discomfort allows for a severe critique of many of these circumstances.  At the same time, there is humor mixed in with the sardonic treatment of state fairs and media, which makes for an enjoyable experience.  The cover picture is also pretty memorable.

Another month later in December 2008, I read The Broom of the System.  This is David Foster Wallace's first novel, which he wrote while still in college.  After reading the darker, more serious essays, I was pleased to find myself laughing throughout this novel.  The G.O.D. (Great Ohio Desert) and the family relationships are just part of the highly enjoyable reading experience.  Even back then it had hints of the potential for highly complicated storytelling technique, but this novel only has embedded stories, no footnotes or endnotes.

I bought Infinite Jest for myself not too long after this point.  But I didn't read it.  My friend who had recommended him in the first place made it clear I was "not yet ready" to read Infinite Jest, and sent me off to read a bunch of other post-modern authors in the meantime.  I'm not sure I'm ready now, but more on that later.

The last book I've read by David Foster Wallace isn't really a book, but a commencement speech repurposed into a book, one I picked up and read in May 2012.  It is probably his best known piece of work to the majority of the population - This is Water.

You can actually listen to him giving the speech in its entirety here:

I can't read the book version, I can't listen to his speech, without tearing up.  It is all about how if you can think of life the right way, you can get through it and even grow.  But he took his own life, so it makes me sad that despite this being his message, he couldn't make it through himself.

My favorite little bit follows, and is a good example of how Wallace writes, and honestly this particular passage reminds me of my favorite bits of another book, Gravity's Rainbow by Thomas Pynchon:


"But if you've really learned how to think, how to pay attention, then you will know you have other options. It will actually be within your power to experience a crowded, hot, slow, consumer-hell-type situation as not only meaningful, but sacred, on fire with the same force that lit the stars - compassion, love, the subsurface unity of all things."

Perhaps there has been enough time for me to separate David Foster Wallace's greatest work from the way his life ending.  Perhaps I have done enough homework and other reading that this won't serve as an impossible challenge.  Or perhaps this, like other books I have abandoned, will prove to be just another supposedly fun thing I'll never do again.  Wallace would understand either way.  So here I go!
Posted by Unknown at 10:23 PM 2 comments: