Review: Beautiful World, Where Are You

Beautiful World, Where Are You by Sally Rooney
My rating: 4 of 5 stars

When I started this book, I was so confused, I had to go back once I had a better handle on the characters. Chapters alternate between narration of events and emails about the same events, but it always takes a while to figure out which female character is writing, because, I'll say it, they sound so much the same. Probably not so much different from the author's own voice.

I liked the idea of friends staying connected with long, philosophical emails, like back in early email days or when everyone had a Livejournal. But in this case their forms of communication almost serve to isolate them from one another, to excuse their introversion, and this does lead to some pretty significant misunderstandings and hurt feelings.

There are two male characters as well, and while they are present on practically every page, they aren't the point of the novel, even if the women are always adjusting in relation to them.

I'm one of the people who loved Normal People and didn't care about all the people who hated it. Still I waited a good bit of time before reading this one so I could enjoy it in my own corner. But then I didn't really enjoy it that much. There are a lot of pieces here but not really a structured plot. Events happen but they aren't the central events of their lives, although we do get a hint of those. I also feel like Eileen reads like a variation of Marianne from Normal People. Marianne is actually more social!

Still, it's not often I find a book about friendship between people in their 30s and 40s and at least that's part of it. There is also an epilogue of sorts that places the characters during the pandemic. As with most epilogues, was that needed?

I will not speculate on how I think this will do in the Tournament or Books (it's on the long list.)

View all my reviews
Posted by Jenny Colvin at 10:56 AM No comments:

Jenny and Nadine reconvene to talk about reasons not to set reading goals, look back on the year, and discuss which books we've read and enjoyed lately.

Download or listen via this link:
Reading Envy 234: Punctuation Marks 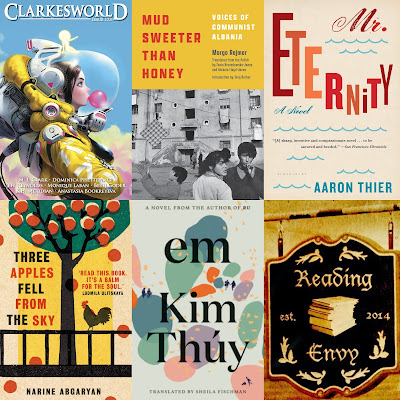 Cloud Atlas by David Mitchell
The Actual Star by Monica Byrne
Svetlana Alexievich
bethgoder.com
The Punctuation Factory by Beth Goder (short story. behind paywalll)
How to Say I Love You w/ Wikipedia by Beth Goder (short story)
Ru by Kim Thuy
The Space between Worlds by Micaiah Johnson
Unfollow Me: Essays on Complicity by Jill Louise Busby
The Book of Magic by Alice Hoffman

Damnation Spring by Ash Davidson
My rating: 4 of 5 stars

This novel took me a long time to read..I first started it while I was reading Barkskins and the subject matter was too similar. And then the emphasis on miscarriage was a lot. I finally pushed through and felt like it was worth it, and overall it has a strong ending.

It takes place along the Klamath River, a river that ends at the Pacific Ocean, and the forests that were so heavily logged in the 1960s and 1970s on both sides, so southern Oregon and northern California..the novel looks at the effects of overloading and herbicides before those things were better regulated. The two central characters - Rich and Colleen - have had hard lives, but it's what they know, and they come to it through several generations.

Thanks to the publisher for providing access through NetGalley. I was a bit delayed in reading it, only because there are so many tree books and I didn't want them confused in my head.

View all my reviews

Posted by Jenny Colvin at 3:59 PM No comments:

Reading Envy 233: Get Into Trouble with Ruth

Jenny starts off the episode by announcing a big project for 2022! Ruth teaches her a new word and we discuss a recent Tournament of Favorites, plus as always, books we've read and liked lately.

Download or listen via this link:
Reading Envy 233: Get Into Trouble 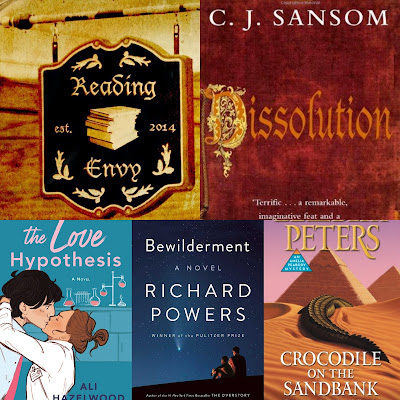 Crocodile on the Sandbank by Elizabeth Peters
Bewilderment by Richard Powers
Dissolution by C.J. Sansom
The Love Hypothesis by Ali Hazelwood

Announcing a theme with four quarters and multiple readalongs in 2022, with enough warning to get you into the spirit and maybe collect a few books. Please consider joining the Reading Envy Readers in Goodreads for the deepest dives and shared ideas for titles.

Quarter One - January-March - The Novels

In 2022, we will focus on Russia. The first quarter of the year, January-March, will focus on the novel. We will have two synchronous discussions (that will become episodes) - one will be a group read of The Possessed: Adventures With Russian Books and the People Who Read Them. Then everyone gets to pick their own Russian novel to read and we will have a low-key sharing episode.

I'm also hoping to do an episode with Kevin Birmingham who is putting out The Sinner and the Saint: Dostoevsky and the Gentleman Murderer Who Inspired a Masterpiece.

So if you picked one Russian novel that you haven't read to read, what would it be? (Or will you wait to read the Batuman to decide?)

It might be the time I finish War and Peace but...

Lauren (@end.notes in Instagram) will be co-hosting this quarter. I haven't decided if we will have a shared read, but perhaps if that is desired I can pick one.

There are so many great books you could read for this quarter; one I'm hoping to finally get to is Pale Fire by Vladimir Nabokov in the bio/memoir category.

One memoir I'd recommend is Memories: From Moscow to the Black Sea by the very entertaining Teffi.

We will have one synchronous discussion for this quarter!

This will have a shared read - A Swim in a Pond in the Rain: In Which Four Russians Give a Master Class on Writing, Reading, and Life by George Saunders.

Then everyone can choose a book of short stories by a single Russian author or some kind of compilation.

This can be any genre, fiction or non-fiction (you could even go back to the non-fiction of quarter 2 if that is more your speed.)

Other ideas could be cookbooks or sci-fi or dystopia or poetry or whatever!!

Lauren will co-host this quarter and we will have recommendations closer to that time.

Will you be participating? What are you excited to read?

Email ThisBlogThis!Share to TwitterShare to FacebookShare to Pinterest
Labels: RERussia2022

Review: When We Cease to Understand the World

When We Cease to Understand the World by Benjamín Labatut
My rating: 5 of 5 stars

I didn't catch this book when it was on the International Booker list, but when it was named a finalist for the translated lit category of the National Book Award, I finally decided to give it a go, especially once I found the audio in Hoopla and it was under 6 hours.

At first, it feels like non-fiction, well researched information about science and math, death and destruction, the usual. It slowly morphs to include details about the characters that might be true, I guess, but would he unlikely to be known without a detailed journal or analysis records. And as it nears the end, the stories start linking and it feels more like a fictional experience.

I always enjoy books that take me on a journey. The characters do not have to be on a journey, but I like the author to have a clear goal in mind even if I don't know what it is... It's one of those undefinable things that I like and is present here. I also am a sucker for books about math and mathematicians and boy did this qualify. I wish it had won the International Booker and I hope it wins the National Book Award for translation.

View all my reviews
Posted by Jenny Colvin at 10:18 AM No comments:

Ah, October, finishing up award lists and trying to blaze through my eARC backlist, while hosting a readalong. I made some progress! 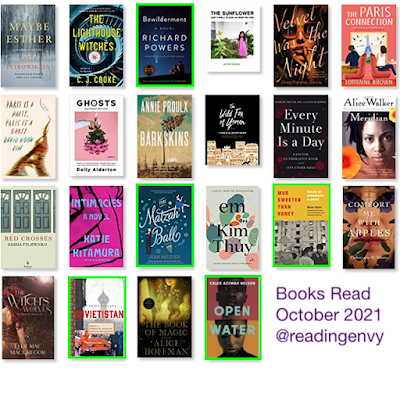 Posted by Jenny Colvin at 11:08 AM No comments:

Email ThisBlogThis!Share to TwitterShare to FacebookShare to Pinterest
Labels: booksread

I am joined by Nadine, Vinny, Laurie, and Bryn to discuss Barkskins by Annie Proulx. We bring in some of the discussion in Goodreads as well as some fresh eyes on this text.

Download or listen via this link:
Reading Envy 232: Barkskins Readalong