I came up with the idea of speed dating my books when my GoodReads "To-Read" Shelf passed six hundred items.  I remembered Nancy Pearl's advice that you should give a book 50 pages, and decided to try doing so with a pile of books from the earliest items on my to-read list (started in 2009.)  I did two successful speed dating projects - one in June of 2011 and one in April earlier this year in 2013.  They are getting closer together, and for good reason.  This is a great way to get the books I don't actually want to read out of my house!  I spent some time compiling a third pile and decided to tackle it as part of NaNoReadMo.

There is no rhyme or reason to this pile other than the date they were added to my to-read list.  I accidentally gathered more than I intended, but it worked out okay.  Some I finished right away, and others I discarded without even giving them 50 pages.  I'll explain why in the list below.  If you want more detailed reviews, please see my GoodReads profile.  Copying and pasting it all here seemed redundant.

Books Still Listed as To-Read, because I like them enough to continue:

Books I'm Uncertain About Only 50 Pages In, but I'll keep reading (they deserve a second date at the very least):

Books I've Abandoned Officially
(Please note these are my own impressions, and they might just not be my thing! That's the point of a speed date - gut reaction, decision MADE. I'm rather proud of how many I've rejected, actually.  I need the space!)
What's next?  Well, I'm trying to decide between getting another speed dating pile together or finishing some of what I started!  Probably both.  I have some time off coming in December which would be perfect for another pile.
Posted by Unknown at 3:12 PM 4 comments:

The Poetry of the National Book Award Longlist 2013

I know the shortlist has already been chosen for the National Book Award, but I committed to reading the entire longlist, and read it I did!  I used the list-making powers of NaNoReadMo to finish up reading them, and I'm finally ready to discuss the poetry category as a whole.

I have taken the list from the National Book Award page and rearranged it.  You can view the shortlist, and eventually the winner (on November 20), back over on their website.

My picks to win (okay, there were two I truly loved. I'm not a judge; I don't have to choose!):

From "It was always autumn in the paraphernalia of my laudanums...." to her poem about wisteria, I was enchanted from cover to cover.  This is what I want in my poetry - resonance, fine craftsmanship, emotion, and beauty.

These poems made me wish I shared the poet's background so they could be claimed as my poems too.

A painful set of poems largely dealing with the poet's brother's suicide.  Grief, trying to find your way after loss, it's all here.  Not easy to read, but worth it.

I just couldn't connect with this one, made up of poems with a frequent theme of aging.

Pretty scattered, very reaction-based, not a style I tend to like.

An example of focusing more on the intricacies and less on communicating an idea.

An interesting concept but not as connected to me as the reader.

I know it is on the shortlist, but I couldn't find a way into the poems about the boxer Jack Johnson.

I know that as soon as I've prescribed myself a list, I will want to read something else, but here are my tentative plans for NaNoReadMo.  I'm breaking the books down into categories and linking to them in Amazon because they make it easy!  I also made a shelf in GoodReads for this month so I could track my progress. I'm going to come back to this list and cross items out that I have either finished or abandoned.

Poetry from the National Book Award Longlist
(I meant to have read these all by now, and I have three left.  It will be nice to finish up that project.)
Books for Book Clubs
(I may have a slight book club problem because this is a pressing list of books that will be discussed within the month of November!)
Books for the Podcast
(I think I'm scheduled for two SFF Audio podcasts in November, which means reading books in preparation)
Books from and about Turkey
(Technically the year of reading Turkish literature is from a book group in GoodReads called The World's Literature, but it's a category of its own, and I'm behind! I want to catch up. The year is almost over and we'll be moving on to another region!)
Books up for Review
(I get cookbooks, audiobooks, and books through NetGalley for review, and I'm always trying to stay on top of it.  Reviewing the cookbooks means making at least 2 things from each (some I've dabbled in already), audiobooks take time, and I'm not sure I'll get through this list in a month! That's what NaNoReadMo is about.)
This list is already getting pretty long.  I'm also going to sprinkle some book speed-dating throughout the month (I have Speed Dating Set 3 all ready to go!). I have an entire bookshelf of practically untouched books, one per state, for that Around the USA idea I started out with this year (whoops), and I have a few audiobooks I haven't touched yet.  This will be a great month of reading! 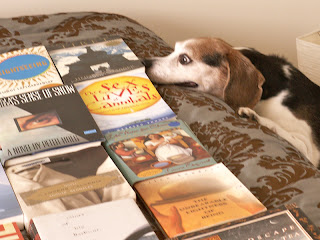 In the past seven years, I have participated in NaNoWriMo (National Novel Writing Month) six times.  Six times!  It's a rush, I've met great people through it, but eventually I had to just come to terms with the fact that I'm a far better reader than writer.  I was starting to not really have fun doing it.

And yet I have a room full of unread books.  Before they take over the house, I have turned them into a challenge.  Join me.  Read mo(re)!  National Novel Reading Month has been declared by yours truly!

1. Read. More than usual.
2. Talk, blog, or tweet about it.  Write reviews or save them for after the month. Take pictures of your piles, if you want. I know I will.
3. Make lists of what you might read, even if you don't stick to them.  (Sorry, this is a requirement.  I like lists and therefore I require that you make one. Muahaha.)
4. Comment on this post so I can follow what you're up to.  Friend me on GoodReads.  Follow me on Twitter.  Whatever it takes.  I'm now your reading cheerleader, and I'm bringing snacks!

That's about it.  Read more.  Dedicate time to it. Plan for it. And get through a pile or two!

(Stay tuned for my reading list for NaNoReadMo!)
Posted by Unknown at 10:30 PM 14 comments: