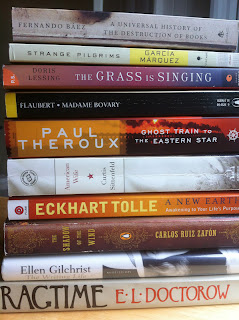 E. L. Doctorow - Ragtime
I have two Doctorow books at home that I've been intending to read... no three.  Ack!  I don't even know if I like him!  Nathaniel asked me if this is what the musical is based on, and I have no idea.  I guess I'll find out.
Posted by Unknown at 9:51 PM 1 comment: The reader for the audiobook is John Lee, whose voice is very familiar to me as the reader for Ulysses. He does a good job with the pronunciation of Turkish names, but I kept expecting him to jump into "Hoopsa, boyaboy, hoopsa!" You know you listen to a lot of audiobooks when....
Posted by Unknown at 3:40 PM 1 comment: