This has been a busy book month for some reason.  I would blame used book stores but this first stack is completely made up of books I got through trades at paperbackswap.com.  The used book store stack is substantial enough to be listed separately.  Gulp. 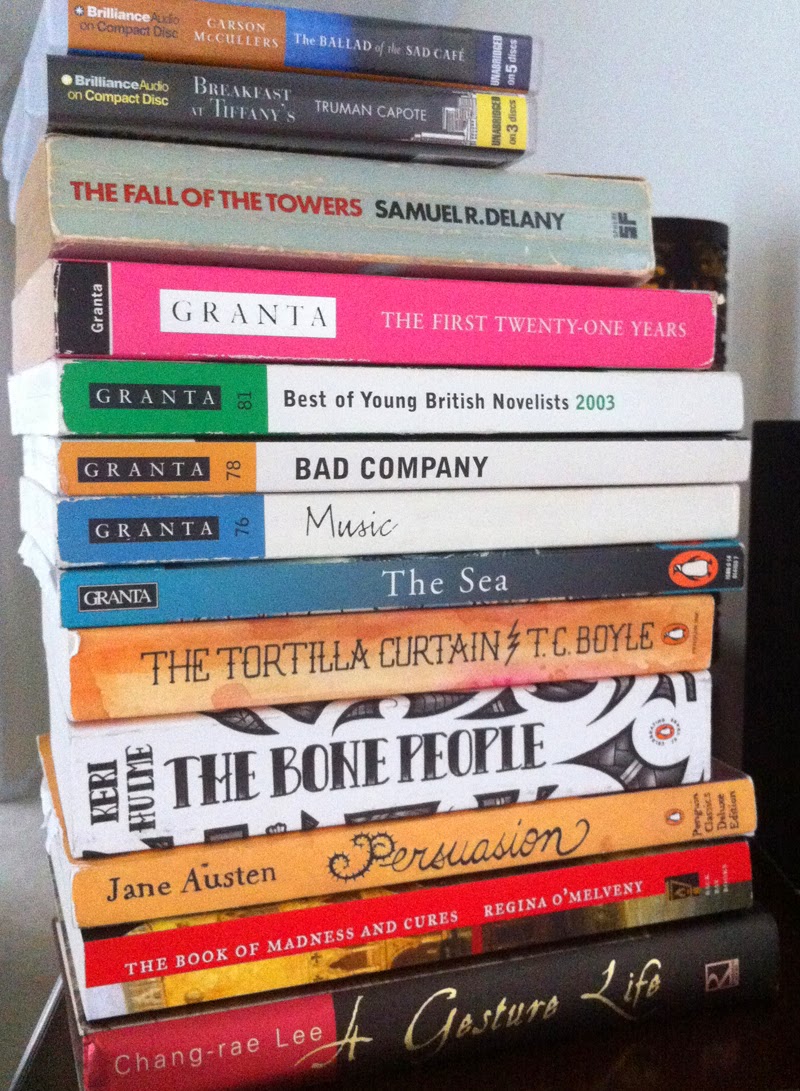 Both of these are review copies that I asked for from Brilliance Audio, one because of the reader (Michael C. Hall, the actor from Six Feet Under and Dexter), the other because I'm trying to read more southern lit.

The Tortilla Curtain by T.C. Boyle
The Bone People by Keri Hume
Persuasion by Jane Austen
The Book of Madness and Cures by Regina O'Melveny
A Gesture Life by Chang-Rae Lee


I stumbled across Granta Magazine which is a literary publication full of short stories, the style of a paperback rather than a slim glossy publication like Harpers, Oxford American, etc.  I stumbled across one in Paperbackswap.com, "The Sea," when I was looking for Orhan Pamuk.  I've been on a short story kick and I hope it lasts through trying some of these volumes.  The others were chosen because of authors or themes, sometimes both.  They are strong candidates for airplane reading on Saturday.

The Boyle, Hume, and Austen are all specific editions that I wanted because of the cover... she says sheepishly.  The links go to the correct edition.  Penguin Ink and Penguin Classics.

I'm reading the O'Melveny for my in-person book club in 2014-15, the Chang-Rae Lee for the Open Book Series, and the Delany for my 2014 reading goals.

Okay, onward to physical book pile #2, known as "I only meant to browse at the used bookstore but then I had credits burning a hole in my pocket and I was in the mood for mighty tomes!" 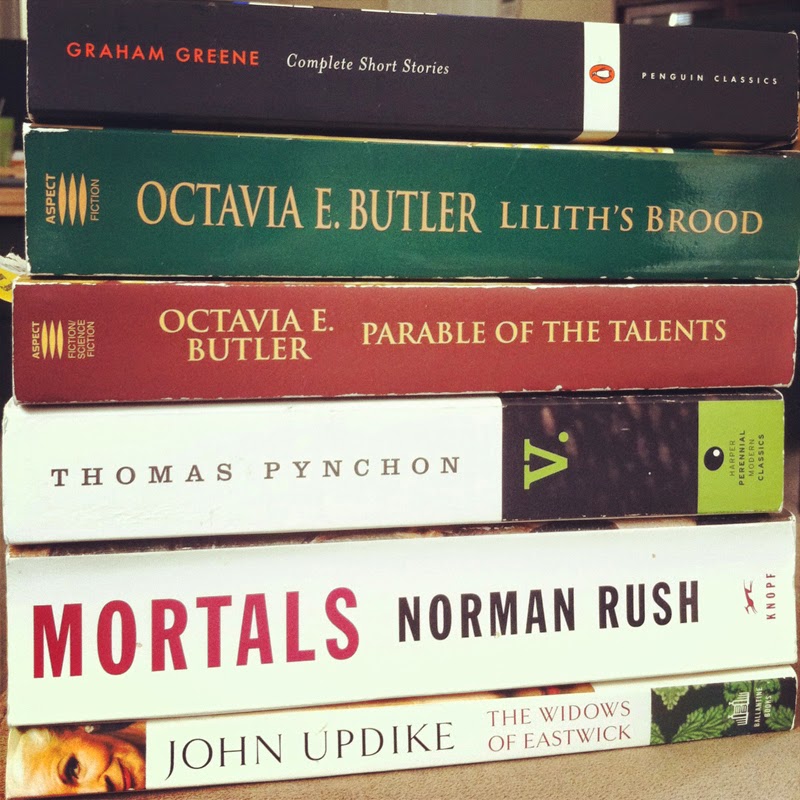 It's funny because every book in this stack was chosen because of previously positive experience with the author. I just finished the Witches of Eastwick today, so the widows are certainly in my future.  I loved Mating by Norman Rush, several by Pynchon, The End of the Affair by Greene, and I wanted to own the parable books by Butler.  The Sword & Laser group is reading the first book of Lilith's Brood for July, and I found the trilogy bound as one $3 volume.  What can you do when the universe clearly wants you to go home with a book? I only paid $1 for this pile because I had trade-in credits for the rest.  Book swapping is the way to go, whether in person or in the mail!


My last book purchase for June was an eBook of War and Peace by Leo Tolstoy, translated by Richard Pevear and Larissa Volokhonsky.  I already talked about it a bit earlier this month, and hope to write more about it soon.  It will take several months to get through, in between other books.

Tell me about the books you've brought home recently!
Posted by Jenny Colvin at 10:51 PM 3 comments: