Reading Envy 042: It Begins with Rain

Jenny is joined by Jason, a welcome repeat guest! We take shelter from the incoming rain accompanying Hurricane Joaquin, but we had no idea how bad the devastation would be in our home state of South Carolina. Jason's home and my home were okay, but that definitely isn't true for everyone! You can donate to aid victims of the flooding in South Carolina if you so desire.

Download or listen via this link: Reading Envy 042: It Begins with Rain.

By the Iowa Sea: A Memoir

by Joe Blair
The Coroner's Lunch

by Colin Cotterrill
The Painter

by Peter Heller
The Immortal Life of Henrietta Lacks

by Rebecca Skloot
All the Living

by C.E. Morgan
The Professor's House

Other books mentioned:
The Monsters of Templeton

by Lauren Groff
Delicate Edible Birds: And Other Stories

by Lauren Groff
Fates and Furies

by Lauren Groff
The Dog Stars

by Peter Heller
Kook: What Surfing Taught Me About Love, Life, and Catching the Perfect Wave

by Peter Heller
The Whale Warriors: The Battle at the Bottom of the World to Save the Planet's Largest Mammals

by Peter Heller
Welcome to Braggsville

by T. Geronimo Johnson
Wild: From Lost to Found on the Pacific Crest Trail

Stalk us online:
Jason on Twitter
Jenny at Goodreads
Jenny on Twitter
Posted by Jenny Colvin at 12:00 AM 2 comments: 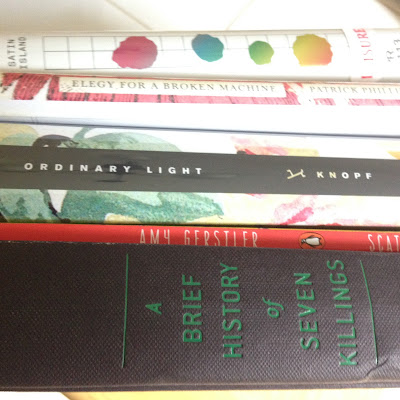 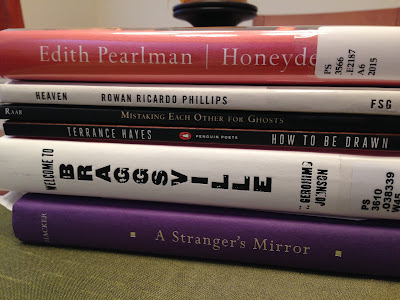 The Smith is shortlisted for the non-fiction category of the National Book Award, while the Pearlman and Johnson are on the long list for fiction (but not the shortlist.) I had previously read the Lauren Groff and Hanya Yanagihara, both of which made the shortlist, but since the Johnson and Pearlman did not, I may return them to the library. They aren't bad but they're not really pulling me in. I will keep the Smith and finish it since it is one of the finalists.
Posted by Jenny Colvin at 12:00 AM No comments:

A few months ago, Jenny sat down with the writer Nathan Ballingrud. After a crash that occurred while saving the raw audio file, Jenny has been reassembling what she fondly refers to as the "Frankenpodcast" from the five-second backup segments that Audacity stores in no particular order. As such there may be wee mistakes where she inserted a sentence that didn't belong, for which she begs your understanding! The end of our discussion, about browsing in bookstores, was not salvageable, but the majority of our conversation made it through. It turned out to be a beautiful monster, which is pretty fitting for this author and his work.

Download or listen via this link: Reading Envy 041: Grotesque Beauty

ed. Ellen Datlow
"The Good Husband" in The Best Horror of the Year, Volume Six

ed. Ellen Datlow
"The Atlas of Hell" in The Best Horror of the Year Volume Seven

by Mike Mignola
The Scarlet Gospels

by Clive Barker
No One Gets Out Alive

by Adam Nevill
The Shipping News

by Annie Proulx
"The Mud Below" in Close Range : Wyoming Stories

by Claire Fuller
The Wilds


Stalk us online:
Jenny at Goodreads
Jenny on Twitter
NathanBallingrud.com