You can read Part 1: Coming of Age here.
I sent my youngest sister a long list of recommended memoirs and biographies because they are her jam. I thought since I had done the work to make the list, I could share it with you too, updated since the list I sent her in December. Since it is so long I will post a chunk of it every now and then. Tell me what you think about this kind of post!

For books to end up on this list,
The descriptions are for my sister, who I'm assuming has not heard of these before. So this is by no means a comprehensive list, and your mileage may vary. And do tell, what have I missed?

Julie and Julia: 364 Days, 524 Recipes, 1 Tiny Apartment Kitchen by Julie Powell
Half the story that went into the Julie and Julia movie, the blogger part. She is cleaned up and made into a nicer person in the film than she is in the book, but it’s very readable. She decides to cook her way through The Art of French Cooking by Julia Child and hijinks ensue.

Cleaving by Julie Powell
This is not alphabetical but it follows Julie & Julia so what can you do. This is a continuation of the story, but instead of her exploring Julia Child she works for a butcher. Also she cheats on her husband. I believe I mentioned she is unpleasant. Yet I gave it 4 stars because I couldn't stop reading it.

My Life in France by Julia Child
Half the story that went into the Julie and Julia movie, the legend, the saint, the one and only Julia Child. This is the stage of her life where she is seeking for a hobby and learns to cook!

As Always, Julia: The Letters of Julia Child and Avis DeVoto: Food, Friendship, and the Making of a Masterpiece by Joan Reardon and Avis DeVoto
I was surprised to feel like I learned so much more about Julia Child through her letters. The DeVotos are in the midst of the political and cultural action in New England while the Childs are moving between various appointed locations while Paul worked for the OSS. Julia was a staunch Democrat and very interested in politics, so many of the letters are full of discussions on what was going on with Eisenhower and McCarthy, up through the election of JFK.

Heat:An Amateur’s Adventures as Kitchen Slave, Line Cook, Pasta-Maker, and Apprentice to a Dante-Quoting Butcher in Tuscany by Bill Buford
Seriously could this title be any longer. I love amateur chef memoirs and this is one of the best, plus it is also kind of a biography of Mario Batali.

Kitchen Confidential:Adventures in the Culinary Underbelly by Anthony Bourdain
At this point, this book is just a restaurant worker classic, but I adore Tony. I read this when I first started thinking about restaurant work, and it was constantly referenced in the Limestone Grille kitchen. I’ve been watching Tony on television ever since.

The Language of Baklava by Diana Abu-Jaber
Funny because I remember this as a novel but it is a true story about being the child of immigrants and recreating community with foods. Light and lovely.

Life Without a Recipe by Diana Abu-Jaber
All of this author’s novels are food related but this one is more personal, about her own childhood with different cultures and being a first-generation American.

Mastering the Art ofSoviet Cooking by Anya von Bremzen
I LOVED this book so much I made recipes from it for Thanksgivukkah one year, and had my book club read it the next year. Not all of them loved it as much. It takes different decades of Soviet Russia and talks about her childhood through certain food items. I thought it was so interesting!

My Kitchen Year: 136 Recipes that Saved My Life by Ruth Reichl
Ruth Reichl was the longtime editor of Gourmet Magazine, and suddenly, Conde Nast cancelled the magazine right before the Thanksgiving issue. The next year of her life was rough, and she went back to cooking and spending time with family to make it through. This is where I got the apricot pie recipe, and even though it wasn’t great, it was how she wrote about it that made me want to try it in the first place.

The Temporary Bride: A Memoir of Love and Food in Iran by Jennifer Klinec
Learning to cook and falling in love, this is an behind closed doors story of Iranian culture!

Insatiable: Tales from a Life of Delicious Excess by Gael Greene
"A woman does well to be beautiful, mysterious, haunting, witty, rich, and exotic in bed... but it never hurts to cook good." From the old, pre-foodie era of New York City!
Posted by Jenny Colvin at 12:00 AM 1 comment:

Jenny talks Tracy into returning to the Reading Envy Pub, and to share what she is reading for the summer. We discuss HEA endings and why everything happy happens in Cornwall. There are a lot of ocean and beach reads on this list, plus a handful of others from Jenny's darker reading.

Download or listen via this link: Reading Envy 091: Watching Our Stories.

I am starting to schedule guests for 2018! If you are interested in appearing on the podcast: FAQ

Jenny at Goodreads
Jenny on Twitter
Jenny is @readingenvy on Instagram and Litsy
Tracy is maintaining stealth status
Posted by Jenny Colvin at 12:00 AM No comments:

Salt Houses by Hala Alyan
My rating: 5 of 5 stars

I loved this novel. It takes a Palestinian family and follows different members throughout periods of conflict, chaos, and opportunity. It starts in the early 1960s and follows through the present day. It asks questions about home, family, belonging, and identity. Despite events often being dictated by war and early characters being forced into becoming refugees, the focus is much more domestic. The characters are worried about their relationships, their toys, their classes. I really appreciated the juxtaposition because so often characters in novels where war is present can only talk to each other about the war. There are tiny details that come back around and have a great impact. I will be nominating this for my book club for next year!

Thanks to the publisher for providing access through NetGalley.
Published 2 May 2017.

View all my reviews
Posted by Jenny Colvin at 10:18 PM 1 comment:

For the past few months, readers have been participating in the first-ever Reading Envy Readalong, of East of Eden by John Steinbeck. Two of those readers, Ellie and Jeff, were brave enough to join Jenny on a rainy evening to discuss the book. This conversation contains spoilers and no summary of East of Eden, so you may want to catch up before you listen.

Download or listen via this link: Reading Envy 090: Readalong of East of Eden.

Thanks to everyone who read along! Feel free to take the survey about the readalong if you have feedback or want to nominate a book for next time. 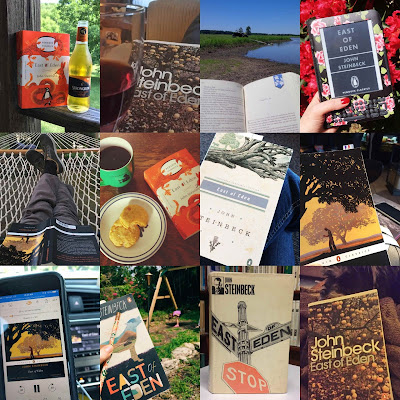 Books discussed, other than East of Eden:

The Shadow Land by Elizabeth Kostova
My rating: 3 of 5 stars

I was curious about this novel after reading both The Historian and The Swan Thieves by this author. I have grown accustomed to complex novels that still move quickly, usually discussing art or literature in some way. I was disappointed by The Shadow Land.

It is very clear that the author has fallen in love with Bulgaria (and a Bulgarian!) and wanted to write a novel that expressed it. So she created this novel as a framework. The first half of the novel contains a lot of movement from place to place, I imagine because she wanted to write about some of these places with such rich history, but some of these places have no bearing on the outcome of the story. The characters are too obviously pawns and the events are too implausible. Some opportunities were missed - the main character is there to teach English yet everyone she meets speaks good enough English, even the elderly. I'm pretty sure the timeline of her adventure overlaps with when she was expected in the classroom but this is not addressed. Her taxi driver has indicators of revolutionary activity (at least resistance) but this is pretty much dropped midway through the story (and was possibly the most interesting story line to me.) One story that seems to tie everything together is told unevenly, and contains the elements of most confusion.

Despite my complaints I did learn some things about Bulgaria in World War II, and the ancient people called the Thracians. I can see why the author is in love with this place. But I think the story she chose to tell inside of it was not a success.

Thanks to the publisher for granting access through NetGalley.

View all my reviews
Posted by Jenny Colvin at 10:17 PM No comments: