September was a great month for books I actually spent real money on, buying first editions of books just as they were released.  Actually TOO many authors I like came out with new books in September, so I didn't even get to them all. 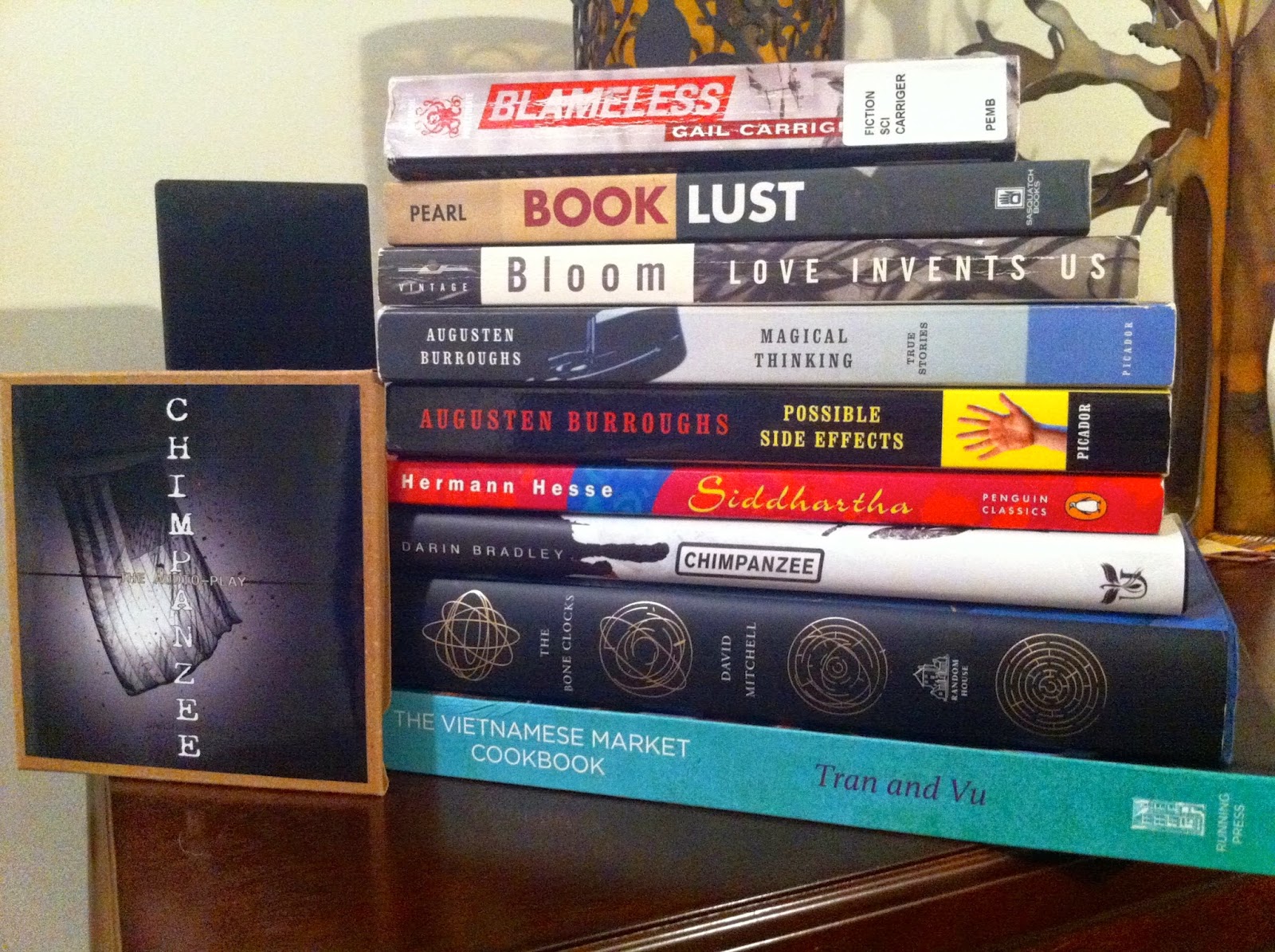 I have been waiting for new books from David Mitchell and Darin Bradley for what seems like years. And then I read the hardcover of Chimpanzee and the author sent me the audio play that he handed out at his release party.  (It is now available on the publisher site, and should be on Audible soon too.) I am saving it for my trip to Tennessee on Friday. SOON.

Blameless, Book Lust, and Siddhartha all come from Paperbackswap, although Book 2 of the Parasol Protectorate was lost in the mail and I need to find another copy of it before I can read Blameless.  Book Lust I've read before but this is part of my attempt to create a "books on books" collection. Librarian? Guilty. Siddhartha is just one of the many titles from Penguin Classics that I only want because they are pretty. Surely it is also a reputable book that I would like to read.

The Vietnamese Market Cookbook is a review copy, and I'm looking forward to trying some of the recipes in there (although I need to go to my local Asian market first!).  The two Burroughs and the Bloom were $1 each at a local thrift store.  I'm thinking I'll read them and trade them as they are in good shape!

I have a few other digital review copies up my sleeve so I'll list them below as well.

In March earlier this year, I was very lucky to be able to go see David Mitchell read from Cloud Atlas and speak about his upcoming (at the time) novel.  I kept meaning to blog about it, and here I am, two weeks after devouring The Bone Clocks and still thinking fondly of this author.  It's time to share that experience.

Because of a generous endowment, the University of South Carolina has a spring author series called The Open Book.  They bring in five authors, many of them huge names.  On the Monday of that week someone from the university or some other scholar gives a lecture, and on Wednesday, the author appears.  I can't drive all the way to Columbia from Greenville more than once in a week, so I sadly have to miss the lectures, but the authors are highly worth it.  (I'm sad at the thought of not getting to see Nikky Finney lecture on the poet this next spring, so I might make an exception to drive down twice that week.) David Mitchell came in March, and was the only author I got to see this last spring.  Next spring, I am better planning my weeks to work around the occasional Wednesday afternoon. 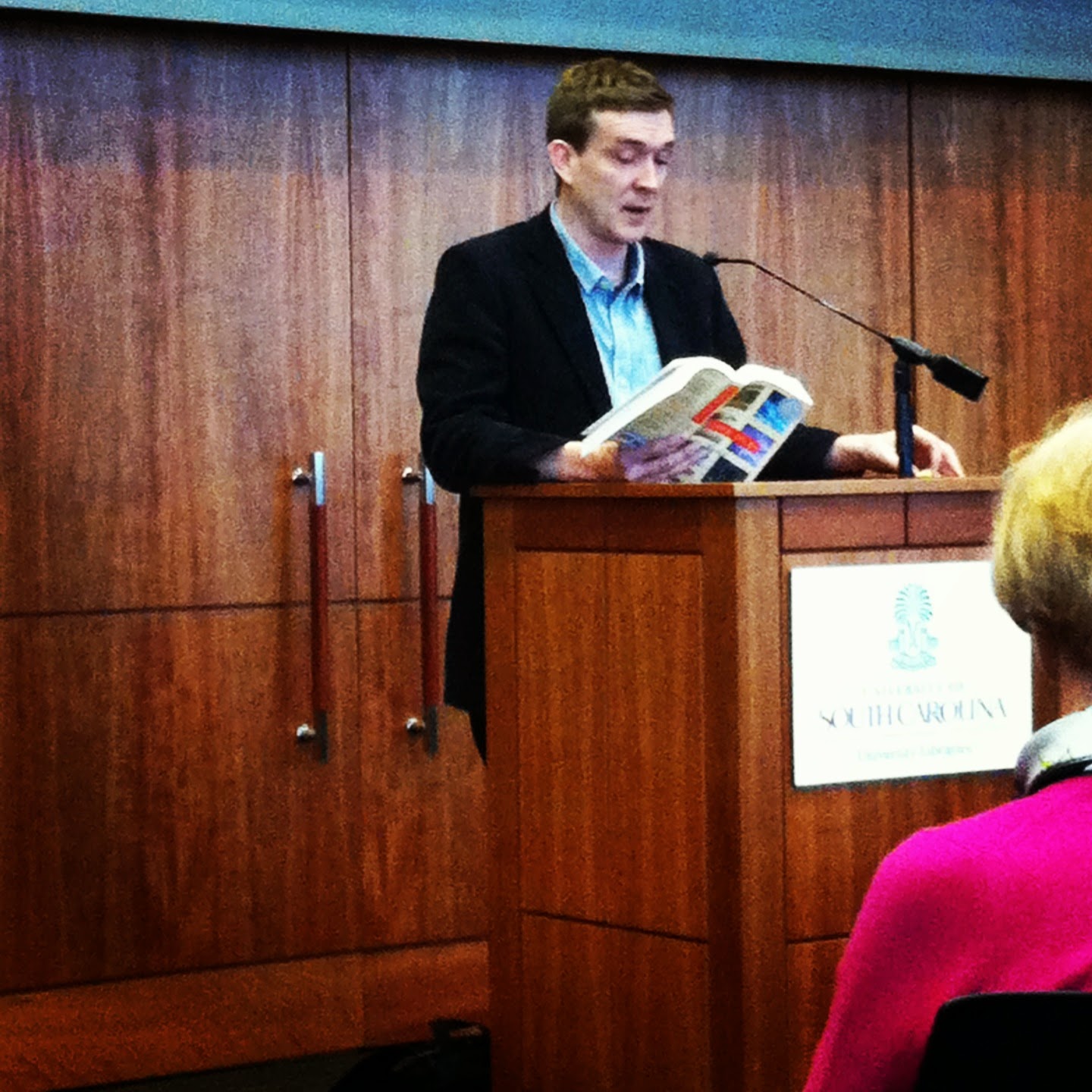 One thing I want to say about David Mitchell is that he is SO charming and friendly. Sometimes I regret going to see an author speak, because their reality is so far from my expectations or beliefs about them. He was friendlier and had an obvious love of the writing and the reading that had gotten him there. He was also excited about his upcoming book and answered some questions about it too. 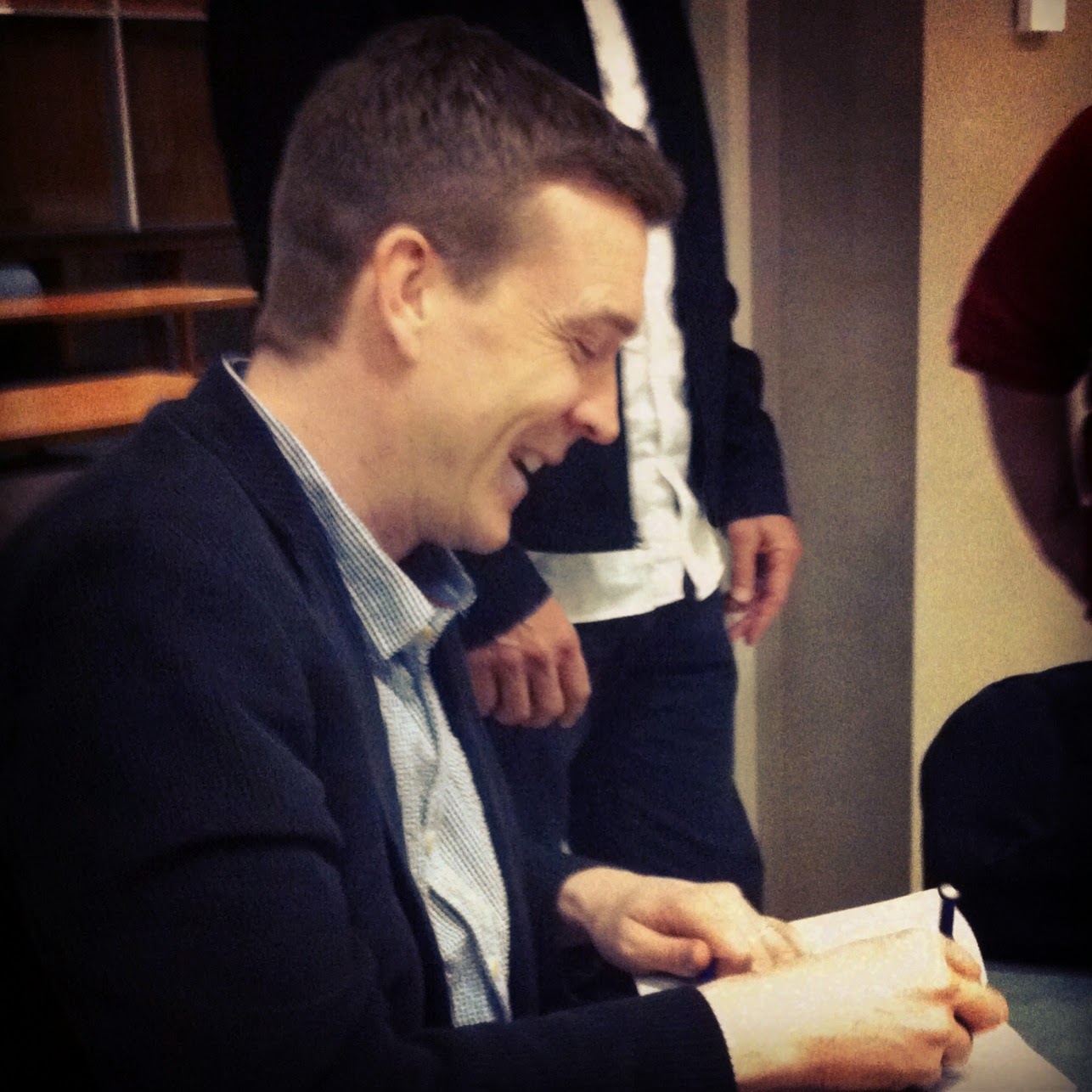 I discovered a colleague after the talk, while those of us wanting our books signed stayed behind. I stayed back in line with him because he had more books than anyone. This meant I heard David Mitchell talking for two hours by the time I spoke to him, and when I did, I accidentally did it in an accent similar to his own. This happens to me sometimes. Whoops. He asked my name for the first book, I said Jenny, and he said, "My Grandmother's name is Jennifer," and whatever I said in response made him perk up and ask if I was English. I apologized and said that just happens. Ha. 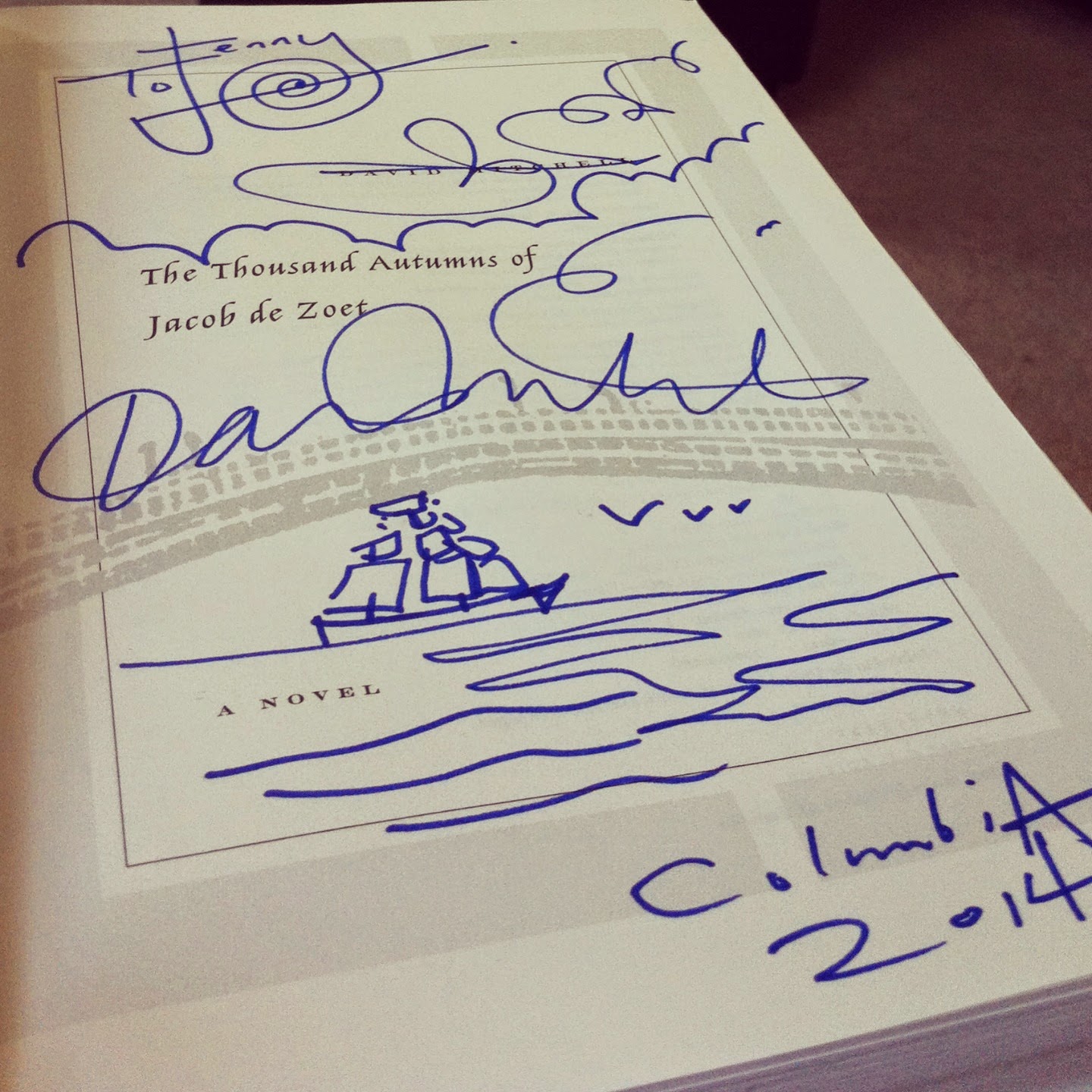 I brought two books along to be signed - Cloud Atlas and The Thousand Autumns of Jacob de Zoet.   He signed and drew pictures, so lovely! It was a great author visit, and I wish I could see him after reading The Bone Clocks, because I have questions.  Hopefully one of these days. 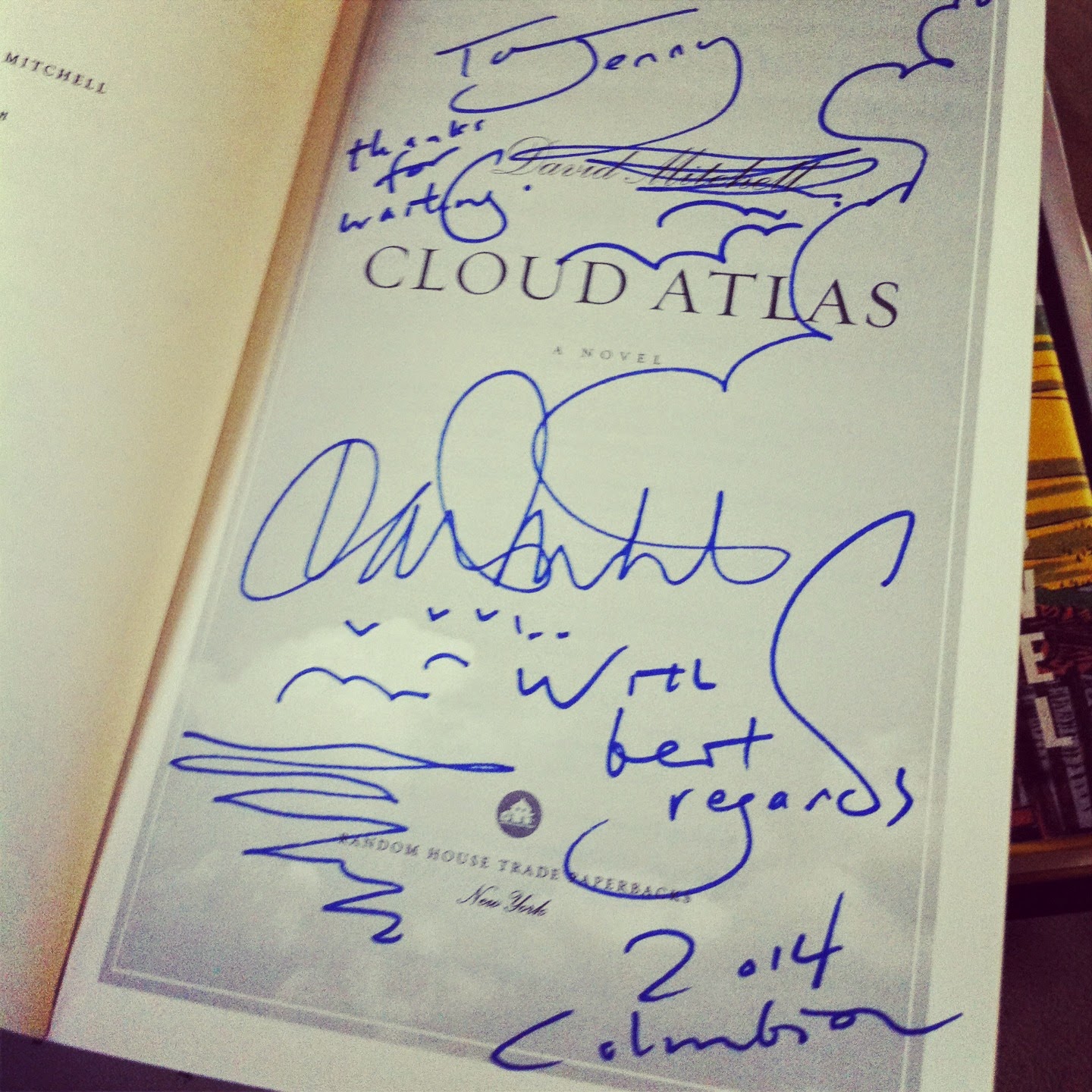 Reading Envy 012: Some Bookers and Some Madness

Jenny and Scott have been busy reading lately and decided to do another podcast in the corner of the Reading Envy pub!  Jenny has been knee deep in the Booker Prize longlist while Scott has been reading with a bit more variety.

Orfeo by Richard Powers
When Angels Wept: A What If History of the Cuban Missile Crisis by Eric G. Swedin
The Blazing World by Siri Hustvedt
At the Mountains of Madness by H.P. Lovecraft
The Bone Clocks by David Mitchell
62% More Awesome by Dave Kellett

Download or listen via this link: Reading Envy Episode 012 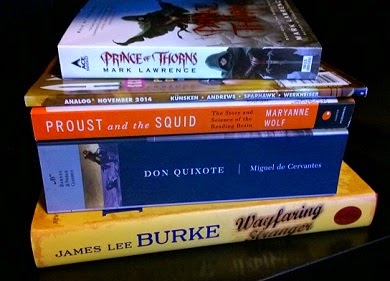 Bought some books this weekend!

Wayfaring Stranger by James Lee Burke
I've enjoyed all of James Lee Burke that I've read to date. All of them have been Robicheaux books - well written, dark, violent stories about Dave Robicheaux, a cop (ex-cop?) in Louisiana. He's an author who can write beautiful prose. When I bought this one, I thought it was standalone, but Goodreads says it's Book 1 of a series called The Holland Family. I'm 100 pages in, I'm enjoying it but am not ready to call it terrific yet. Not like any Burke I've read to date so far.

Don Quixote by Cervantes
I've been wanting to read this for a long time. Barnes and Noble has these classics - if you buy 2 you get one free. My daughter got Edgar Allan Poe and H.G. Wells, I got Don Quixote.

Proust and the Squid by Maryanne Wolf
Recommended to me by Bryan Alexander, I found this one online and it arrived this weekend. The first paragraph of the description:

The act of reading is a miracle. Every new reader's brain possesses the extraordinary capacity to rearrange itself beyond its original abilities in order to understand written symbols. But how does the brain learn to read? As world-renowned cognitive neuroscientist and scholar of reading Maryanne Wolf explains in this impassioned book, we taught our brain to read only a few thousand years ago, and in the process changed the intellectual evolution of our species.


Analog, November 2014
Next up is the latest issue of Analog Science Fiction Magazine. I recently subscribed again - in print - but my copies haven't started arriving yet. Robert R. Chase has one in here, and the cover story looks interesting.

Prince of Thorns by Mark Lawrence
I looked for this at the bookstore because Orson Scott Card mentioned it in a column. Mark Lawrence is a research scientist in the Artificial Intelligence field, and this is a fantasy - I think. From what Card said, I expect blurred genre lines. I read the first two pages in the bookstore and was hooked. Love his style.

On the shelf they go!

I can't believe it is the middle of September already!  I lost almost an entire week with the plague that is still going around my university, and I could hardly read, just sat around watching trashy tv and sleeping. 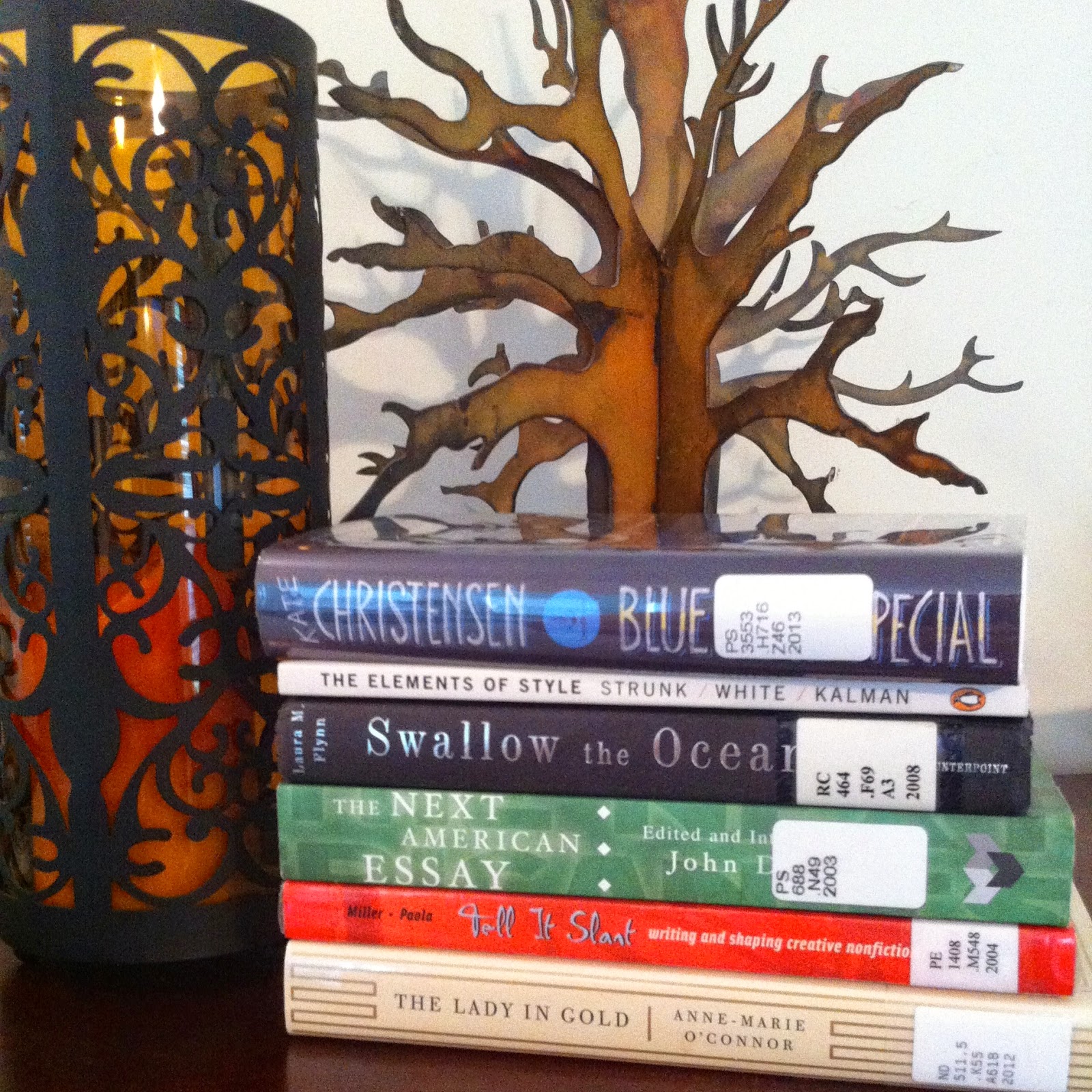 This past month, a lot of my library books are required reading for a course I am auditing - Creative Non Fiction. It is taught by the talented Joni Tevis, author of The Wet Collection: A Field Guide to Iridescence and Memory.  I attended a reading from last year's Creative Non Fiction class, and was so impressed by the work the students did that I begged my way in this time around.  My goal is to get better at writing non-fiction, particularly figuring out how to decide on details and writing better endings.  I am enjoying it so far, and it has been helpful to see a class from the student perspective, at my university where we expect so much.

The books for Creative Non Fiction include (I left one in my office that I'll cover next time):
The Elements of Style (illustrated!) by Strunk, White, and Kelman
Swallow the Ocean by Laura M. Flynn
The Next American Essay
Tell It Slant: Writing and Shaping Creative Nonfiction

The other two books on the pile are both for communal reading purposes - The Lady in Gold is for my in-person book club next Monday (I need to get reading!) and Blue Plate Special is from an author who I will see at a reading in the spring.  I don't really need to read books by her yet but after almost buying this same book at a bookstore, I couldn't resist when it ended up on the New Books shelf.

Blue Plate Special: An Autobiography of My Appetites by Kate Christensen
The Lady in Gold by Anne-Marie O'Connor


Posted by Jenny Colvin at 5:35 PM No comments:

Reading Envy 011: People of the Book

On this episode, we bring back Bryan Alexander from Episode 002, to have a discussion about reading.  Rather than pick two books each, we just let books come up along the way, and that list is below!  While you're here, why don't you share with us how and why you read, either in the comments here or by tweeting to @readingenvy.

We mentioned Twitter, and you can find each of us there.
Bryan Alexander
Jenny Colvin
Scott D. Danielson

The many books we mentioned today!

Dolphin Island by Arthur C. Clarke
Speedboat by Renata Adler
Going, Going, Gone by Jack Womack
Let's Put the Future Behind Us by Jack Womack
This is the Way the World Ends by James K. Morrow
Towing Jehovah by James K. Morrow
City of Truth by James K. Morrow
Gravity’s Rainbow by Thomas Pynchon
The Bible
Infinite Jest by David Foster Wallace
The Shining by Stephen King
The Ice Queen by Alice Hoffman
The Road to Dune by Frank Herbert and Brian Herbert
Life Itself by Roger Ebert
Book of the New Sun (series) by Gene Wolfe
Castle of the Otter by Gene Wolfe
Ghost in the Wires: My Adventures as the World's Most Wanted Hacker by Kevin Mitnick
A Little History of the World by E.H. Gombrich
One by Conrad Williams
Dune Chronicles (series)
Skullduggery Pleasant (series)