EA Mann, author of One American Robin, joins Jenny in the Reading Envy pub for a chat about books. We discovered a bizarre theme of books written in the second person. We thought it was rare, but perhaps not? Stay tuned for a mid-podcast announcement!

Download or listen via this link: Reading Envy 078: Small Towns in the Second Person.
Subscribe to the podcast via this link: Feedburner
Or subscribe via iTunes by clicking: Subscribe
Or listen through TuneIn
Or listen on Google Play
Listen via Stitcher

If you are interested in appearing on the podcast: FAQ
Link to the survey about the upcoming readalong

The Odd Sea by Frederick Reiken
The Never-Open Desert Diner by James Anderson
Eventide by Kent Haruf
Treats: A Collection of Short Stories by Lara Williams
Down and Out in Paris and London by George Orwell
Ground Zero, Nagasaki: Stories by Seirai Yuichi, translated by Paul Warham

24in48 readathon
Michael Kindness and Books on the Nightstand podcast
The Sun Also Rises by Ernest Hemingway
Plainsong by Kent Haruf
Benediction by Kent Haruf
Empire Falls by Richard Russo
A Land More Kind than Home by Wiley Cash
Our Souls at Night by Kent Haruf
Republic of Consciousness Prize
Diaries by George Orwell
Nickled and Dimed by Barbara Ehrereich
Kitchen Confidential by Anthony Bourdain
A Dictionary of Mutual Understanding by Jackie Copleton
Scratch: Writers, Money, and the Art of Making a Living edited by Manjula Martin
Violent Borders: Refugees and the Right to Move by Reece Jones
Swimming Lessons by Claire Fuller

Jenny at Goodreads
Jenny on Twitter
Jenny is @readingenvy on Instagram and Litsy
EA is @EAMann on Litsy
Posted by Jenny Colvin at 12:00 AM No comments: 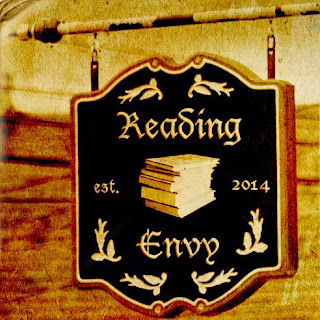 This turned into a long happy post about three great years. If you have been a guest or a listener, I appreciate you! It's a love fest. Now tell me about the books you've read recently, and I'll have what you're reading.

On the 20th of January, 2014, the first episode of the Reading Envy Podcast posted. Scott Danielson, originating co-host, chatted with me, Jenny, about books. You can relive that moment by listening to Episode 001.

Something you may not know - there was another first episode that we recorded to see how things would work, and never posted it. It's buried deep on the cutting room floor.

On Episode 001, Scott discussed a short story from Her Smoke Rose Up Forever, a collection of stories by James Tiptree, Jr. That book has followed a thread through the podcast. On Episode 002, I discussed the entire collection, which I had just finished. A year and a half later, on Episode 032, Luke Burrage and I discussed the collection story by story for a crossover episode with the Science Fiction Book Review Podcast.

I love when one guest inspires another guest to read a book based on hearing about it on the podcast! What else could reading envy even be?

For most of that first year, episodes posted once a month. At first, there were three people on each episode and each person discussed three books. This made the episodes too long! The magical formula these days is six books per episode, either two each for three people or three each for two.

The first book club episode I recorded was in 2014, with Josh Lawrence and terpkristin. Our discussion on Episode 013 focused on what it is like to be part of the Sword and Laser book club. Not too long after, Karen and Jean talked on Episode 015 about the League of Extraordinary Dorks book club.

By the end of 2014, the Reading Envy Podcast had hit 19 episodes, after a switch to two episodes a month in the middle of the year.

2015 kicked off with my first author interview episode, Episode 021 with Darin Bradley. I was so nervous! But I liked how it went, and that year would also see interviews with Joni Tevis (Episode 029), Ann VanderMeer (Episode 036), Monica Byrne (Episode 038), and Nathan Ballingrud (Episode 041.) I haven't done any author interviews since, but not for lack of trying!

2015 also saw one more book club episode, with Marco and Averi from the Misfit Readers on Episode 023. I also interviewed a bunch of librarians at conferences this year - Episode 029 found me approaching a bunch of librarians I didn't know at a conference in Portland, and Episode 043 recorded 100 librarians talking about books for the 100th anniversary of the South Carolina Library Association. I have gone back to the librarian episodes and read many books mentioned in those episodes; they are great for building up your tbr list!

This past year, most of the episodes have been me and one guest, with the exception of one more book club episode with Holly and Caroline from the International Center of the Upstate (Episode 049) and when Scott and Phillip were both guests on the same episode based on Philip's request (Episode 052.)

2016 also saw the return of a hearty handful of great guests, who I hope will keep coming back. I'm happy to pick up new guests too, and I am looking forward to 2017. If you are interested in appearing on the podcast please view the FAQ .
Posted by Jenny Colvin at 12:00 AM 2 comments:

Reading Envy 077: No One Messes With a Wolf

Shawn Mooney joins Jenny for a chat about books in the Reading Envy pub, braving snow storms and earthquakes! Stay tuned for a mid-podcast announcement!

Download or listen via this link: Reading Envy 077: No One Messes With a Wolf.
Subscribe to the podcast via this link: Feedburner
Or subscribe via iTunes by clicking: Subscribe
Or listen through TuneIn
Or listen on Google Play
Listen via Stitcher

Little break to say Happy Anniversary to Reading Envy!
25 More Outstanding Podcasts for Readers
Link to the survey about the readalong!

And for something super-meta, here is Shawn's Goodreads shelf labeled Reading Envy Podcast Recommends.
Posted by Jenny Colvin at 12:00 AM 5 comments: 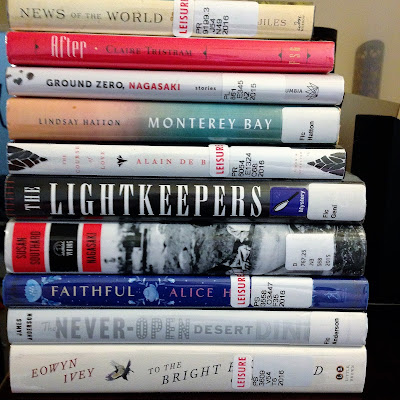 This stack is really more of a reflection of the books I've brought home from the library since I went back to work on January 3, but that seems to be plenty! The Tournament of Books longlist and an upcoming book club discussion that I am leading fuel many of these.

News of the World by Paulette Jiles
After by Claire Tristram
Ground Zero: Nagasaki Stories by Yuichi Seirai
Monterey Bay by Lindsay Hatton
The Course of Love by Alain de Botton
The Lightkeepers by Ally Geni
Nagasaki: Life After Nuclear War by Susan Southard
Faithful by Alice Hoffman
The Never-Open Desert Diner by James Anderson
To the Bright Edge of the World by Eowyn Ivey

The Hatton, Geni, Anderson, and Ivey were all contenders for the Tournament of Books, but none of them made the short list. That's okay, I'm still going to read them anyway. Actually I only have one left!

I'm leading a discussion next month on A Dictionary of Mutual Understanding by Jackie Copleton. I felt like I needed a better grounding on Nagasaki, so that is why I have the Seirai (translated) and the Southard. I need to get cracking on those, and a reread of the Copleton!

I snagged the Jiles, Botton, and Hoffman from the new books cart in the library where I work, and requested the Tristram from interlibrary loan after hearing about it from my friend (who is the author!)
Posted by Jenny Colvin at 6:36 PM 4 comments:

Jenny sits in a corner alone at the Reading Envy pub and reflects on the goals of 2016, establishes new goals for the new year, and finishes up a few book speed-dating projects.

Download or listen via this link: Reading Envy 076: Borderlands.


Subscribe to the podcast via this link: Feedburner
Or subscribe via iTunes by clicking: Subscribe
Or listen through TuneIn
Or listen on Google Play
Listen via Stitcher

Relevant links:
Original 2016 reading goals
Africa2016 reading report (this is where the top five are listed) 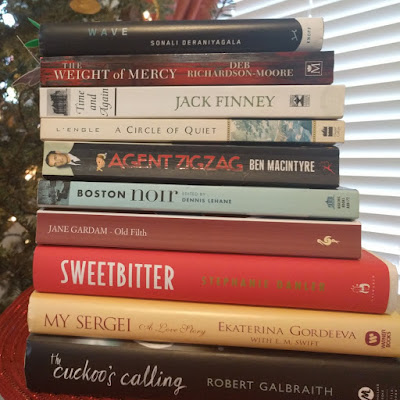 Wave by Sonya Deraniyagala
The Weight of Mercy: A Novice Pastor on the City Streets by Deb Richardson-Moore
Time and Again by Jack Finney
A Circle of Quiet by Madeleine L'Engle
Agent Zigzag by Ben Macintyre
Boston Noir: Stories edited by Dennis Lehane
Old Filth by Jane Gardam
Sweetbitter by Stephanie Danler
My Sergei: A Love Story by Ekaterina Gordeeva
The Cuckoo's Calling by Robert Galbraith 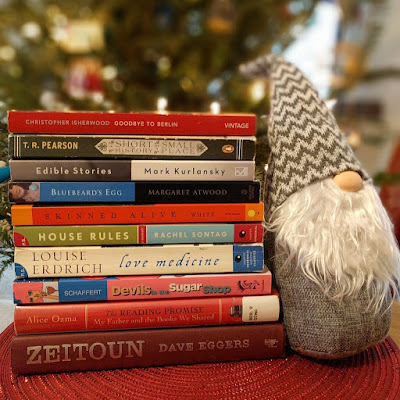 Goodbye to Berlin by Christopher Isherwood
A Short History of a Small Place by T.R. Pearson
Edible Stories: A Novel in Sixteen Parts by Mark Kurlansky
Bluebeard's Egg: Stories by Margaret Atwood
Skinned Alive: Stories by Edmund White
House Rules by Rachel Sontag
Devils in the Sugar Shop by Timothy Schaffert
Love Medicine by Louise Erdrich
The Reading Promise: My Father and the Books We Shared by Alice Ozma
Zeitoun by Dave Eggers

Jenny at Goodreads
Jenny on Twitter
Jenny is @readingenvy on Instagram and Litsy
Posted by Jenny Colvin at 12:00 AM 8 comments:

I got sucked into these and thought I'd share what I read! 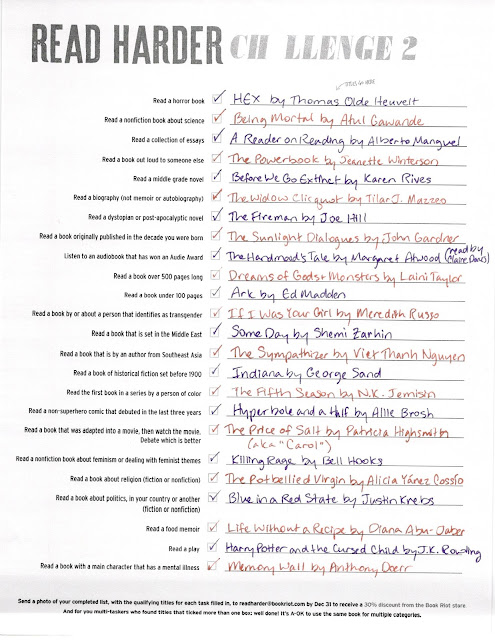 And the Pop Sugar challenge: 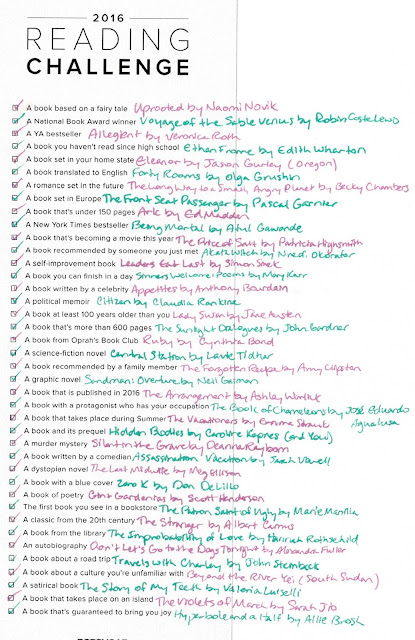 Posted by Jenny Colvin at 11:49 AM No comments: