Review: Things to Do When You're Goth in the Country

Things to Do When You're Goth in the Country by Chavisa Woods
My rating: 5 of 5 stars

These stories totally live up to the title, which is so often not the case.

First, watch the book trailer. I do not typically bother with them but this is perfect. Goths. In the country. Plus zombies and meth and trailers. It's all in here!

Oh yeah and just when you think you're going to read an outsider story with edgy circumstances, that's when things get weird. You have to read it to see it!

My favorite stories were "How to Stop Smoking in Nineteen Thousand Two Hundred and Eighty Seven Seconds, Usama," "Zombie," (truck stop prostitute zombie?) and "Things to do when you're Goth in the Country."

This is an author who I will read more of! So fun.

Thanks to the publisher for providing a copy through Edelweiss. This will show up on Episode 088 of the Reading Envy podcast.

View all my reviews
Posted by Jenny Colvin at 8:43 PM No comments:

Exit West by Mohsin Hamid
My rating: 3 of 5 stars

I was really looking forward to this book. It was burning a hole in my pocket because I had heard such good things, and was happy when it was picked as a book club pick for one of my groups.

I ended up disappointed for a few reasons. I think it's a decent read, a quick read certainly, but not the five-star read I was hoping for. The basic premise is a bit of a spoiler, better discovered as you read the book, so I will put it all behind a spoiler tag.

(view spoiler)[So Exit West is about refugees, but instead of crossing borders, there are large masses of people moving between countries through magical doors. The doors appear randomly and sometimes get blocked off by authorities once they know what is going on. The author has said he came up with this concept so he didn't have to dwell on the border crossings. The problem is, without the violence and difficulty of border crossings or navigating the legal system or waiting in relocation camps, the stakes are pretty low for refugees. So he removed what he didn't want to include, but lost a lot of the conflict, the danger, the challenge.

It's also weird to have just one random element of magic in a book. It smacks of convenience, and, well, it is. See above. And even so, magic doors! If they're going to be there, they could have been used so much more. The best bit in the entire novel is when these two older men pass through the door and fall in love. It would have been better if the novel had started with the premise of these doors appearing because of the need of the refugees (similar to Room of Requirement) and then morphed into this entirely other thing.

My last disappointment has to do with the relationship between Saeed and Nadia. No matter who talked about this book, they always mention the romance between the two. They describe the novel as a love story, but where's the love? The two end up together because of happenstance and then out of necessity but there is no spark. They don't understand one another or have the same priorities. So when they separate it does not feel like a loss. SO disappointing. A strong romance would have saved everything. (hide spoiler)]

View all my reviews
Posted by Jenny Colvin at 8:38 PM No comments:

What is it about online book clubs? Grace and Amanda were curious too, and decided to do a formal anthropological study. Jenny was one of their informants, and she thought it would fun to hear about the study, their experiences, and what they have learned so far. At about 25 minutes in, we also talk about books we have read recently, so there should be something for everyone.

Download or listen via this link: Reading Envy 087: Going Native with Bookclub Social.
Subscribe to the podcast via this link: Feedburner
Or subscribe via iTunes by clicking: Subscribe
Or listen through TuneIn
Or listen on Google Play
Listen via Stitcher

The first Reading Envy Readalong is trucking along!

The Marriage of Opposites by Alice Hoffman
Valley of the Gods: A Silicon Valley Story by Alexandra Wolfe
The Protester Has Been Released: Stories by Janet Sarbanes
It Ends With Us by Colleen Hoover
The Silver Swan by Amo Jones
A Closed and Common Orbit by Becky Chambers

Review: Things We Lost in the Fire: Stories

Things We Lost in the Fire: Stories by Mariana Enríquez
My rating: 4 of 5 stars

This book of short stories feels very real, about poverty and children navigating the dangerous urban environments of Argentina, and then suddenly there are things that are unexplained. Sometimes they seem to be due to violence of humans, and other times they appear supernatural. The true horror is that you are never completely certain, and people disappear, or lives are lost. Either way there is no method of control in the environment.

Some of my favorites:

"The Dirty Kid"
A woman notices a homeless boy and then thinks he is killed, and then it gets weird.

"The Inn"
I liked this, the details, the friendship, the chorizo, the relationship alluded to but not detailed (the father and the innkeeper) and the larger "horror" setting.

"Adela's House"
So terrifying to not have an answer, to wonder at what is being implied, is it fantastical or violence related? Phew.

I feel very grateful to have my "Newest Literary Fiction" group to urge me on to reading books like this, and this was a buddy read for May 2017.

View all my reviews
Posted by Jenny Colvin at 2:05 PM No comments: 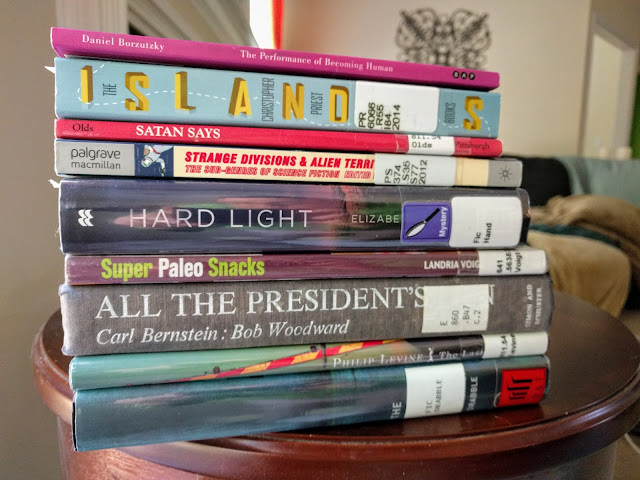 Over the past month, I brought home more poetry from the libraries - the Borzutzky (how many names have two Z's?), the Olds, and the Levine. When I went to pick up the Hand, which I wanted to read as the third book in a series I've enjoyed, I snagged the paleo snacks book too. The Brooke is a resource for my Reading class, the Drabble was mentioned on my podcast, and the Priest is a book on my radar.

For my Reading class, I require my students to read books in genres they don't usually read. I always do it too, so last year I read a football book and an Amish romance. This year I didn't have many options other than politics and philosophy... I decided to get the Bernstein/Woodward book because I know so little about the Nixon events. In school we basically learned "Nixon got impeached" and then headed to the 1980s.

Posted by Jenny Colvin at 2:48 PM No comments:

Vertigo by Joanna Walsh
My rating: 4 of 5 stars

I was not unsettled or unnerved by these stories, so it is tempting to rate them lower because they did not fulfill what was promised in the blurb and title. But what I really liked is how adeptly Walsh captures the ways people really are when they interact.

"He is not keen to relax. He is keen to get on. He is already late for his next stage of relaxation, for the beach, where we have an appointment to meet with some friends of his at a strict hour. He is worrying that we will be late, that they will be anxious, that they, that he, will not be able to relax. He takes out his phone to check the time. We must be on time for the deckchair, the towel."
-from Vagues, or as I refer to it, the Oyster Restaurant story

"Some women take power in a country by souveniring." - from Vertigo

"At the end of the jetty, on my side of the estuary, a band is playing. Only children are dancing. The adults stare at the band as though music is something they had forgotten. It must be dispiriting to perform like this, afternoon after afternoon. One man nods the tune to his partner. She fails to pick it up. There are stalls selling snacks, and other things, but no urgency in the queue for anything. Everyone has enough money, more than enough money for food, and no one is hungry."
-from Drowning

So basically I felt the stories showed great insight but there is something that makes them fade quickly from my mind.


View all my reviews
Posted by Jenny Colvin at 4:59 PM No comments:

Reading Envy 086: The Queen of Bailing

How often do you set a book aside before finishing? Shawn DNF Mooney knows a little something about bailing on books, and so we tackle that issue before chatting about recent reads and more.

Download or listen via this link: Reading Envy 086: The Queen of Bailing.
Subscribe to the podcast via this link: Feedburner
Or subscribe via iTunes by clicking: Subscribe
Or listen through TuneIn
Or listen on Google Play
Listen via Stitcher

The first Reading Envy Readalong is coming in May next started this week!

Idaho by Emily Ruskovich
The Gustav Sonata by Rose Tremain
O Caledonia by Elspeth Barker
Island Home: A Landscape Memoir by Tim Winton*
The Bookshop that Floated Away by Sarah Henshaw
The Handmaid's Tale by Margaret Atwood

Moonglow by Michael Chabon
Version Control by Dexter Palmer
Book Lust by Nancy Pearl
Music and Silence by Rose Tremain
By the Book Column in NYRB - Ali Smith
Breath by Tim Winton
Cloudstreet by Tim Winton
Desert Solitaire by Edward Abbey
Sharon Butala
The Solace of Open Spaces by Gretel Ehrlich
Soft Apocalypse by Will McIntosh
Cat's Eye by Margaret Atwood
The Blind Assassin by Margaret Atwood
The Handmaid's Tale on HULU (not a paid advertisement)
Pachinko by Min Jin Lee
A Fine Balance by Rohinton Mistry
The Explosion Chronicles by Yan Lianke
Hard Light by Elizabeth Hand
Hunger: A Memoir of (My) Body by Roxane Gay

*Jenny discovered this book comes out a week AFTER the posting date for this episode. My apologies; I really thought I had it right!
Posted by Jenny Colvin at 12:00 AM 2 comments: