This post is going live a little later than mid-July. I spent just over a week in Oregon and mailed my books back to myself, and since they went media mail they just got home. I put my library books in there since I had finished them, along with the books I bought at (where else) Powells. The newly purchased books will be included in my monthly new books in post at the end of July. 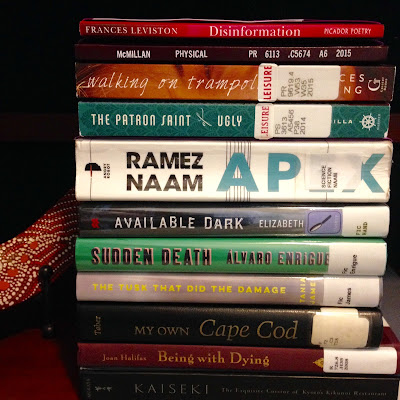 Disinformation by Frances Leviston
Physical by Andrew McMillan
Walking on Trampolines by Frances Whiting
The Patron Saint of Ugly by Marie Manilla
Apex by Ramez Naam
Available Dark by Elizabeth Hand
Sudden Death by Alvaro Enrigue
The Tusk that did the Damage by Tania James
My Own Cape Cod by Gladys Taber
Being with Dying: Cultivating Compassion and Fearlessness in the Presence of Death by Jane Halifax
Kaiseki by Yoshihiro Murata

I heard about the Murata from an eGalley of Super Sushi Ramen Express, so of course I had to read more about this fascinating cuisine.

I wish I could remember where I heard about the Halifax. I requested it immediately from interlibrary loan and devoured it before my trip home. I discuss it further on Episode 063 of the Reading Envy Podcast: Desolation Road.

The Leviston, McMillan, and James are all on my stack because they were finalists for the Dylan Thomas Prize, and I had already read the other two nominees. I figured, why not?

The Whiting and Manilla were total impulse checkouts when I was looking for light reads for my trip, the Taber was recommended by a Litsy friend, and the Enrigue was the July pick for one of my Goodreads groups.

The Hand and Naam are books in series I have started and liked, and want to keep reading. The Naam will finish a trilogy, and I hope to dig into it this weekend if not sooner.

Jenny does another round of book speed dating to meet her 2016 reading goals, and decides to go with the #scifijuly theme. Then she shares books on grief, death and dying, a theme she has been following through literature lately. Jenny is visited in her office at the very end by a future guest!

Download or listen via this link: Reading Envy 063: Desolation Road. 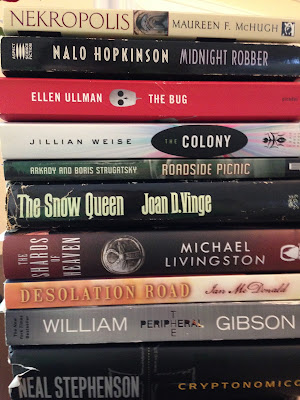 Nekropolis by Maureen F. McHugh
Midnight Robber by Nalo Hopkinson
The Bug by Ellen Ullman
The Colony by Jillian Weise
Roadside Picnic by Arkady and Boris Strugatsky
The Snow Queen by Joan D. Vinge
The Shards of Heaven by Michael Livingston
Desolation Road by Ian McDonald
The Peripheral by William Gibson
Cryptonomicon by Neal Stephenson

The Year of Magical Thinking by Joan Didion
H is for Hawk by Helen Macdonald
Grief is the Thing with Feathers by Max Porter
Staying Alive: Real Poems for Unreal Times edited by Neil Astley
The Ark by Ed Madden
Being Mortal: Medicine and What Matters in the End by Atul Gawande
When Breath Becomes Air by Paul Kalanithi
Being with Dying: Cultivating Compassion and Fearlessness in the Presence of Death by Joan Halifax
When Things Fall Apart by Pema Chodron
The Holders and The Seers by Julianna Scott (I called her Julianna Holden on the recording)
The Parasol Protectorate by Gail Carriger
Etiquette & Espionage by Gail Carriger
Is Everyone Hanging Out Without Me? by Mindy Kaling
War and Peace by Leo Tolstoy

Other mentions:
"How to Lift Him" TED Talk with Ed Madden
Book Riot: "How to Read when the World is Terrible"
"Late Fragment" by Raymond Carter

Stalk us online:
Jenny at GoodReads
Jenny on Twitter

David Galloway returns to the Reading Envy pub to discuss more books. He previously appeared on Episode 028: The Room of Requirement and there are some fun connections to our last discussion. You don't need to hear 028 first! This episode is posting a few days early because Jenny is going off the grid for a week or so.

Download or listen via this link: Reading Envy 062: Olfactory Stimuli.

The Graveyard Book by Neil Gaiman (2008)
Gift from the Sea by Anne Morrow Lindbergh (1955)
Beggars in Spain by Nancy Kress (1993)
Generation Loss by Elizabeth Hand (2007)
The Mussorgsky Riddle by Darin Kennedy (2015)
The Country of Marriage: Poems by Wendell Berry (1971)

Episode 028 - The Room of Requirement with guest David Galloway

Jenny at GoodReads
David on his blog
Jenny on Twitter
David on Twitter
Posted by Jenny Colvin at 12:00 AM No comments:

A lot of readers in Litsy have been reporting on their goals, picking best reads for the year, etc. I started to get curious about the progress I have made on my reading goals, and decided to both investigate and share it with you. If you want to go back and listen to me discuss more behind the initial intent behind the goals, check out Episode 048 of the podcast.

I'm encountering a minor version to what happened last year, when I got stuck reading books from New Guinea for four months - instead of reading one book in every country, I have read several books for many of the countries I aim to read. So while I've read 20 books for this challenge, I have only covered 11 countries. 31 to go if I'm going to read all the countries I've never read from. Five a month? I'm not sure that's going to happen, but here is what has:


Mali
The Cruelest Journey: Six Hundred Miles To Timbuktu by Kira Salak (March 2016)
The Bad-Ass Librarians of Timbuktu: And Their Race to Save the World’s Most Precious Manuscripts by Joshua Hammer (March 2016)


Mozambique
The First Wife: A Tale of Polygamy by Paulina Chiziane (April 2016)


Swaziland
When Hoopoes Go to Heaven by Gaile Parkin (May 2016)

Goal 2: Read some of my shelf of anthologies (perhaps develop strategies for this)

FAIL. I have made it through one anthology, and that was one I purchased after making these reading goals. Sigh.

Goal 3: Don't be a hoarder - complete six more book speed dating projects to make decisions about books I'm not sure about

I haven't been so great about not adding more books, but to be fair (to me) that wasn't the goal. I have done one speed dating project every two months, so for 2016, I have done three. I will work on another one sometime in July.

I recorded about each of them, so you can hear my thoughts:

I definitely worked a lot with this although most of it is not something I can show. I absolutely prefer to record my thoughts in audio over video.

Goal 5: Read genres I usually ignore - crime and romance, maybe others
Heck yeah. I have read more romance this year than any other time in my life. That discussion is in the same episode as speed date #2, "The Wall of Romance." When I gave my students this project, I picked up a sportsing book.  I have read a few more crime novels this year, although I'm not sure if it's more than normal, and it is likely not the titles I had in mind when I made the goal.