The Imperfectionists by Tom Rachman

The Imperfectionists by Tom Rachman

I took breaks from this book throughout the day, because it was SO GOOD that I didn't want it to end. No, really. I rarely feel that way, but apparently, that is the experience I'm looking for when I open a novel. This is a novelized set of short stories tied together by the history of a newspaper and its demise, and each chapter focuses on a figure related to the paper. Sometimes the chapter/story would end and I'd find that all of the sudden I felt deep compassion for these fictional characters, and I was sad to see each of them go despite/because of their quirks and bad choices. Rachman is a powerful storyteller and I can't believe this is his first novel!

Happy new year, everyone!
Posted by Unknown at 10:46 PM No comments:

Email ThisBlogThis!Share to TwitterShare to FacebookShare to Pinterest
Labels: literary 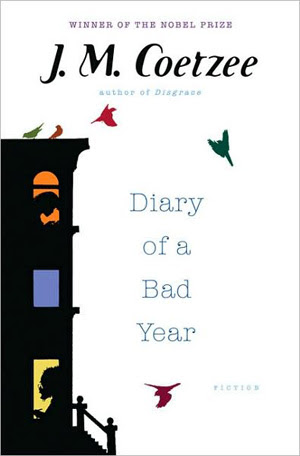 Every once in a while, I read a book because I think I should. Maybe an author has been nominated for an award, or wins an award, or keeps showing up on those lists of books you "should" read. So I try.

The first book I read by J. M. Coetzee was Disgrace, and I read it in 2006. To me, it was the epitome of what has almost become an archetype in modern literature - the depressed, amoral, worn-out, male academic. My dislike was severe, I was surprised I finished it. I wondered if it was just because I couldn't identify with it, as a 28 year old who had just finished a graduate degree, at the beginning of her career and quite happily married. Imagine my horror upon discovering that this actually won the Man Booker Prize in 1999! Ha.

For whatever reason, probably the "shoulds," I read Slow Man in 2007. It had actually been nominated for the Man Booker Prize in 2005. It contains a character from a previous book that I have not read, Elizabeth Costello. The main character was similar to the one in Disgrace, to the point that even the other characters in the novel point it out!

"She could not stay with a man who was tired all the time. It was hard enough to hold her own tiredness at bay. She had only to stretch out beside him in the too familiar bed to feel the weariness begin to seep out of him and wash over her in colourless, odourless, inert tide. She had to escape!"

When I was selecting books to read over the long holiday break, I thought maybe I would try giving Coetzee another chance. I brought three of his books home with me - Diary of a Bad Year, Summertime, and Elizabeth Costello. I made it through Diary of a Bad Year, but found it suffered similar issues as the other two. Add to that the tone of it being written in an autobiographical tone (I believe it has even been called autobiographical fiction, a subgenre quite a bit of his work falls under), and the divided writing style, and it was torture.

I read the first chapter of Elizabeth Costello and of Summertime, but just couldn't force myself. I might just call it quits on Coetzee, kind of like I had to do with Brahms as a young pianist, after each reading through of a piece was worse than the one before. Maybe he would mean more to me later on in life. I hope not, because I fear that to identify with him more would be to have lived in misery.

But seriously, what am I missing? I am willing to continue forcing myself to have an open mind.
Posted by Unknown at 4:44 PM No comments:

I finished this book a couple of weeks ago, one of the finalists for the National Book Award for 2010. I've waited to review it for a bit so I could mull it around in my head.

There are heavy themes here, of loss, obsession, and also how they relate to Jewish history and identity. This is far more delicately handled by Krauss than by Howard Jacobson in The Finkler Question, where the characters are always informing each other that they are thinking about their Jewish identity.

When it comes down to it, most of the stories center around a desk and interweaving versions of loneliness. This is also handled in a subtle way, and in some cases the desk doesn't even show up for a while. It varies in importance, and she crafts interesting characters with unusual tendencies. I was actually sad to reach the end because I was reluctant to let the stories go.

"In life we sit at the table and refuse to eat, and in death we are eternally hungry."

I would give this one 5/5 stars, and recommend reading it.
Posted by Unknown at 11:25 PM No comments:

Why I Didn't Finish

I keep copious lists of the books I want to read, have read, and even the books I have abandoned. I adopted Nancy Pearl's philosophy that life is too short to read a book you aren't into, and in general I give books a good 50 pages, 100 if it has been recommended to me or nominated for an award.

Okay, some books I give fewer than 50, and some I moan that I bothered finishing once I get to the end (Freedom, anyone? I'll quit picking on that book eventually, maybe it will be my New Year's Resolution).

I think the book I was saddest to abandon so far this year was I Hotel by Karen Yamashita. It was one of the finalists for the National Book Award in the fiction category, and it is about my favorite city on earth, San Francisco. It chronicles ten years during the civil rights movement, focusing on different characters and movements in each section. The story is told through prose, poetry, scripts for faux documentaries, and other narrative tricks.

In the first section, I was actually really into it. I liked the characters, I loved how the author incorporated the historical research into it, and I even marked quotations that I liked. ("I've been too busy missing you to be angry" was my favorite, from a poem written on the wall by an immigrant.) But then I got into the second section, and discovered all the characters I had started to grow fond of and interested in had been abandoned for an entirely new set of characters and situations.

I don't want to say there is no overarching plot, because I didn't read until the end to find out if they return. But I had the sense that the characters aren't the point - the city is the point. The city and the themes among those fighting for their rights in the 1960s and 1970s - this is the focus. The characters help to tell the story and then they move on.

I'm still chiding myself for not having enough patience, but around page 215 (see, more than 50 pages) it started to feel formulaic, patterned, and insincere. Life is too short, so I allowed myself to quit.

I actually wonder if it might be better in the context of a history class than read straight through - specific sections paired up with deep looks into different groups of people who settled in the bay area, and their struggles for survival and identity. It might be a better use of the creative presentation of what was a fascinating time in United States history.
Posted by Unknown at 10:06 PM 1 comment: