August was very busy with a second child moving in, so this might be my lowest book count yet. But I did get some great Balkans reads in, and some great Women in Translation titles in. 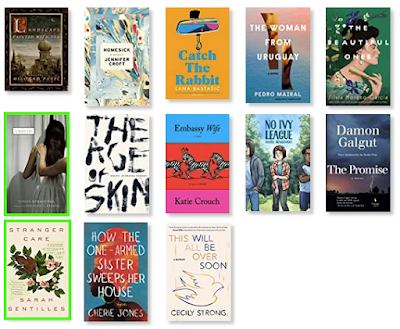 Posted by Jenny Colvin at 11:26 AM No comments:

Landscape Painted with Tea by Milorad Pavić
My rating: 2 of 5 stars

This gorgeous edition has been on my shelves since I very first started collecting books for what I called my Around the World challenge in 2012. It's just never stopped. But in my focus on Europe in 2021, I have a shelf of books like this that have been with me an unread for too long.

Set in Belgrade, Yugoslavia, at least in part, the story starts with an architect in search of his father, an officer who vanished in Greece during World War II. This journey takes him to Mount Athos and quickly turns into a lot of italicized portions detailing dreams, stories, myths, fables, etc. I've dropped this book a lot as it drifted me off to sleep.

The second half is based on a crossword with esoteric segments that vary between raunchy and mystical and frankly gave me a huge headache. I can tell this author thinks highly of myself but it took me since January to force my way through it. The conclusion is so ridiculous and annoying, well can you tell what I think of this book.

View all my reviews
Posted by Jenny Colvin at 9:12 AM No comments:

Jenny is joined by Ed Needham, who has singlehandedly been producing a literary magazine in the UK. We talk about books we've read recently!

Download or listen via this link:
Reading Envy 227: Strong Words 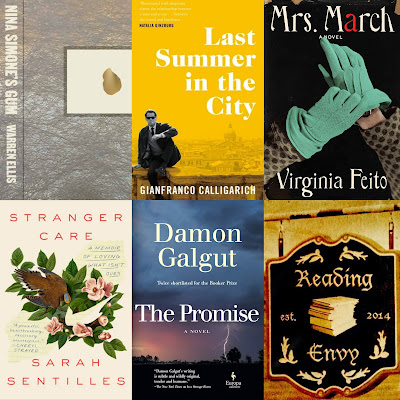 Mrs. March by Virginia Feito
The Promise by Damon Galgut
Last Summer in the City by Gianfranco Calligarich, translated by Howard Curtis
Stranger Care: A Memoir of Loving What Isn't Ours by Sarah Sentilles
Nina Simone's Gum by Warren Ellis

Episode 012 - Some Bookers and Some Madness
Episode 088 - Author Head Space with Sara Moore
Episode 090 - Reading Envy Readalong: East of Eden with Ellie and Jeff
Episode 112 - Reset Button with Eleanor Thoele
Episode 129 - Coming Back to Books with Nadine
Episode 130 - All the Jennifers with Fern Ronay
Episode 192 - Sly Milieu with Thomas

Review: The Beautiful Ones

The Beautiful Ones by Silvia Moreno-Garcia
My rating: 3 of 5 stars

I finally read this (she writes so fast I had two books by her on my eARC backlog! I made myself read this one before Velvet Was the Night).

It's like... alt history or just nameless vague regency plus a little bit of telekinetic magic. No Mexican folklore or mythology elements that I can identify although some reviews have labeled it as "telenovela" - perhaps only because of who the author is? It has quite a few similarities to Shades of Milk and Honey but the pacing is quite slow - I found myself skimming to the parts between Nina and Hector.

Here's my confession - there's a lot of space between expectation and experience in this one. I'm so used to her usual mode of taking a strong female, uprooting her, and placing her into a story that is somehow colored by Mexican or Central American mythology or folklore that I kind of felt like this story wasn't as interesting without that component. There is a woman, Nina, who is uprooted, and has been a bit of an outcast because of her telekinetic abilities. She bonds with a performer who has similar abilities and hopes to marry him, but his story has a lot of secrets that get in the way.

My second confession - since I've read her vampire book, her gods book, etc., I thought The Beautiful Ones would be some kind of supernatural being. I'm kind of bummed that they aren't.

In the society itself are the "beautiful ones" who seem to be old money types who don't actually have money, but they are well-mannered and still hold a place in society. She has this blood but was raised outside the city and starts out with her cousin who is supposed to help her find a husband. But nobody wants her to use her abilities in public! And okay I love telekinetic stuff in books (The Girl with the Silver Eyes was my absolutely favorite book as a kid) but it's a little too infrequent in this book that I found myself skimming to those parts, since the rest of it is paced pretty slowly. Some exciting things that happen, like a duel, just held no interest to me whatsoever.

One thing I really liked, and I hope we see this again from the author, was her omniscient narrator voice - the point of view doesn't switch but we are able to see the thinking of more than one character, and I really like being able to do this. The way she wrote it, it added a lot to the story, leaving the reader with a more complete picture than the characters sometimes had. Still, the other issues like pacing and lack of development make it at the bottom of the author's oeuvre for me.

Thanks to the publisher for granting me access to this title via Edelweiss. It came out April 27!

View all my reviews
Posted by Jenny Colvin at 2:14 PM No comments:

Email ThisBlogThis!Share to TwitterShare to FacebookShare to Pinterest
Labels: review

A Spare Life by Lidija Dimkovska
My rating: 5 of 5 stars

This book has a history on my shelves. It comes from Two Lines Press but I actually received it a few years ago from the Malaprop's paperback-first subscription. The bookseller who selected those titles has proven to have excellent taste even if I didn't get to them right away.

And this will count for Women in Translation Month and Read the World 21 (Balkans) as well as the #exyulit challenge - not to mention I get to check North Macedonia off my Around the World list and for my Europe 2021 challenge. This book is good evidence that reading challenges get us to read books we might not get to otherwise!

This rather long novel is the story of twin sisters who were born conjoined at the head. It's also the story of Yugoslavia, Macedonia, and the split of the country through war, religious, and political change. The author tries to use the sisters to speak metaphorically about the region, and it wasn't too obtuse to grasp, even in translation. The very long chapters cover specific time periods for the sisters.

View all my reviews
Posted by Jenny Colvin at 10:21 AM No comments:

July was more chaotic than we expected so I didn't read as much as I expected! 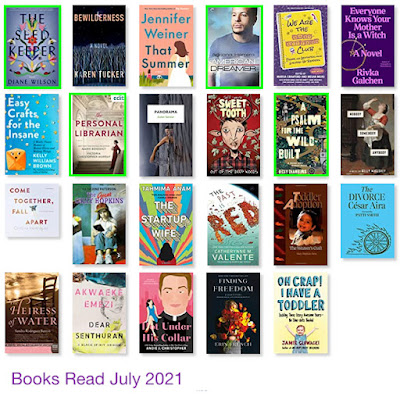 Posted by Jenny Colvin at 12:28 PM No comments:

Lindy joins me to talk books, where we discuss Canadian lit, vignettes and white space in writing, and what really makes a monster.

Download or listen via this link:
Reading Envy 226: Cucumber Sandwiches 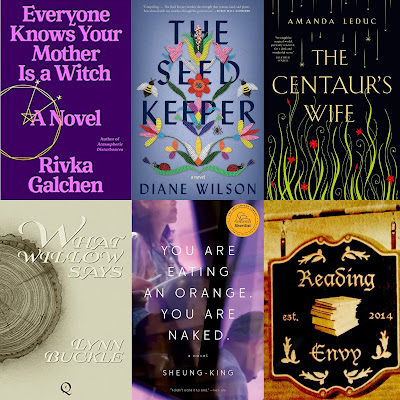 You're Eating an Orange. You are Naked. by Sheung-King
Everyone Knows Your Mother is a Witch by Rivka Galchen
The Centaur's Wife by Amanda Leduc
The Seed Keeper by Diane Wilson
What Willow Says by Lynn Buckle

Shadow Giller Prize
How to Pronounce Knife by Souvankham Thammavongsa
Giller Prize
Kuessipan by Naomi Fontaine
Tournament of Books
A Tale for the Time Being by Ruth Ozeki
Jeanette Winterson
Atmospheric Disappearances by Rivka Galchen
The Archive of Alternate Endings by Lindsey Drager
Disfigured by Amanda Leduc
LitFest Alberta
The Fabulous Zed Watson! by Basil Sylvester and Kevin Sylvester
Braiding Sweetgrass by Robin Wall Kimmerer
2019 Canadian Human Rights Tribunal report about Indigenous children
When the Light of the World was Subdued.... edited by Joy Harjo
The Summer Book by Tove Jansson
Beneath the Rising by Premee Mohamed
And Miles to Go Before I Sleep by Jocelyn Saucier
Come Together, Fall Apart by Cristina Henriquez