I really would like to tell you about my trip to the SC Book Festival last weekend.  My original plan was to go all day both days, but because of the two hour commute each way, that quickly shortened to just part of the first day.  I still wish I had left home early enough to see the great Nikki Giovanni, but I just couldn't get out of the house on time!

I went to several sessions:

More after the jump, but this will be long! 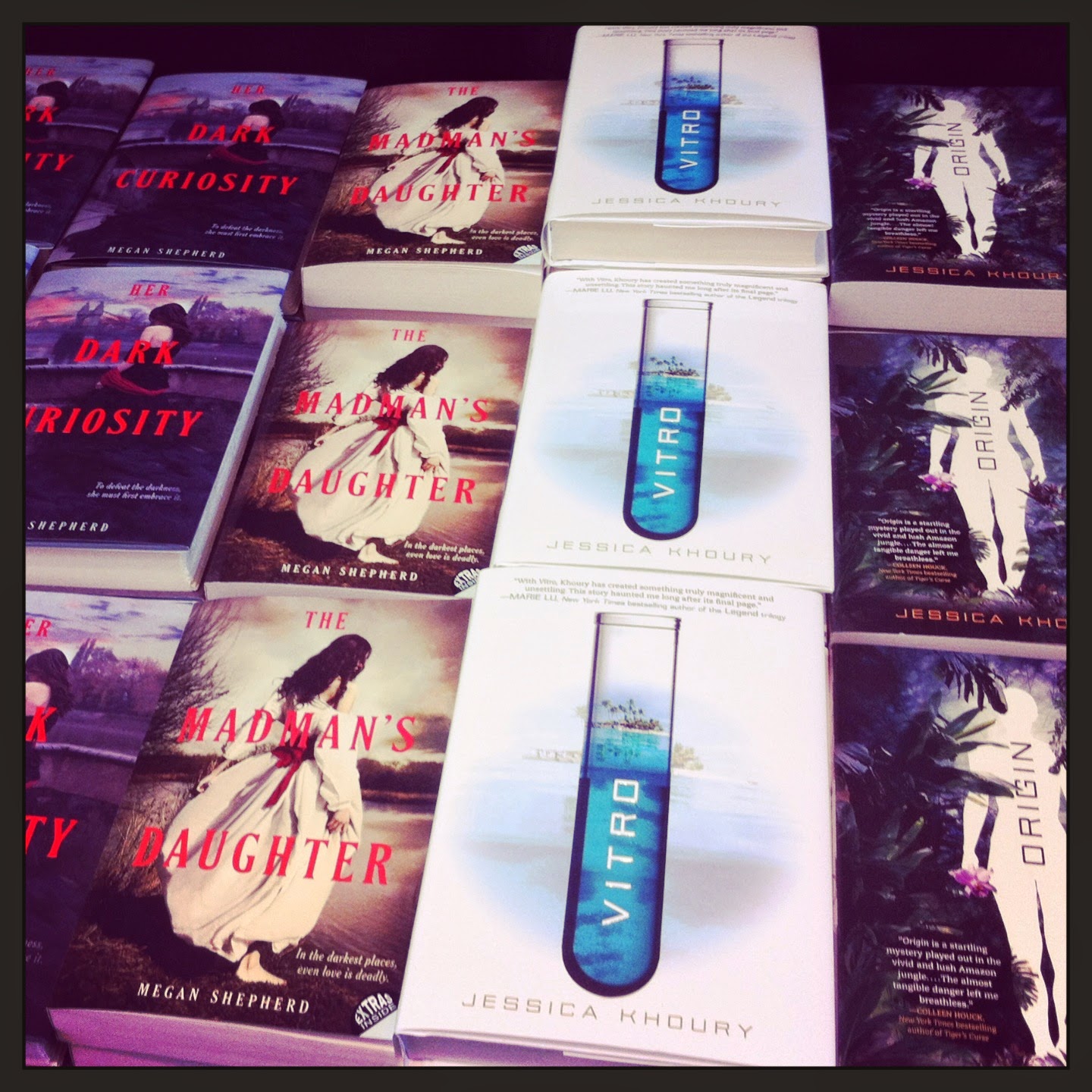 It was interesting to hear the three YA authors talk about how they got to where they are, and the ideas they are working with.  I was most interested in Megan Shepherd, who is finishing up a trilogy based on classics like The Island of Dr. Moreau, Jekyll & Hyde, and Frankenstein.  Not to be pigeon-holed, her next series is a science fiction, alien abduction theme.  Jessica Khoury said she prefers to write about "science experiments gone wrong."

One obvious thing about YA science fiction,  fantasy and supernatural novels is that the cover art really pulls you in.  There were piles of books for sale in the exhibit hall but I held back from purchasing that much. 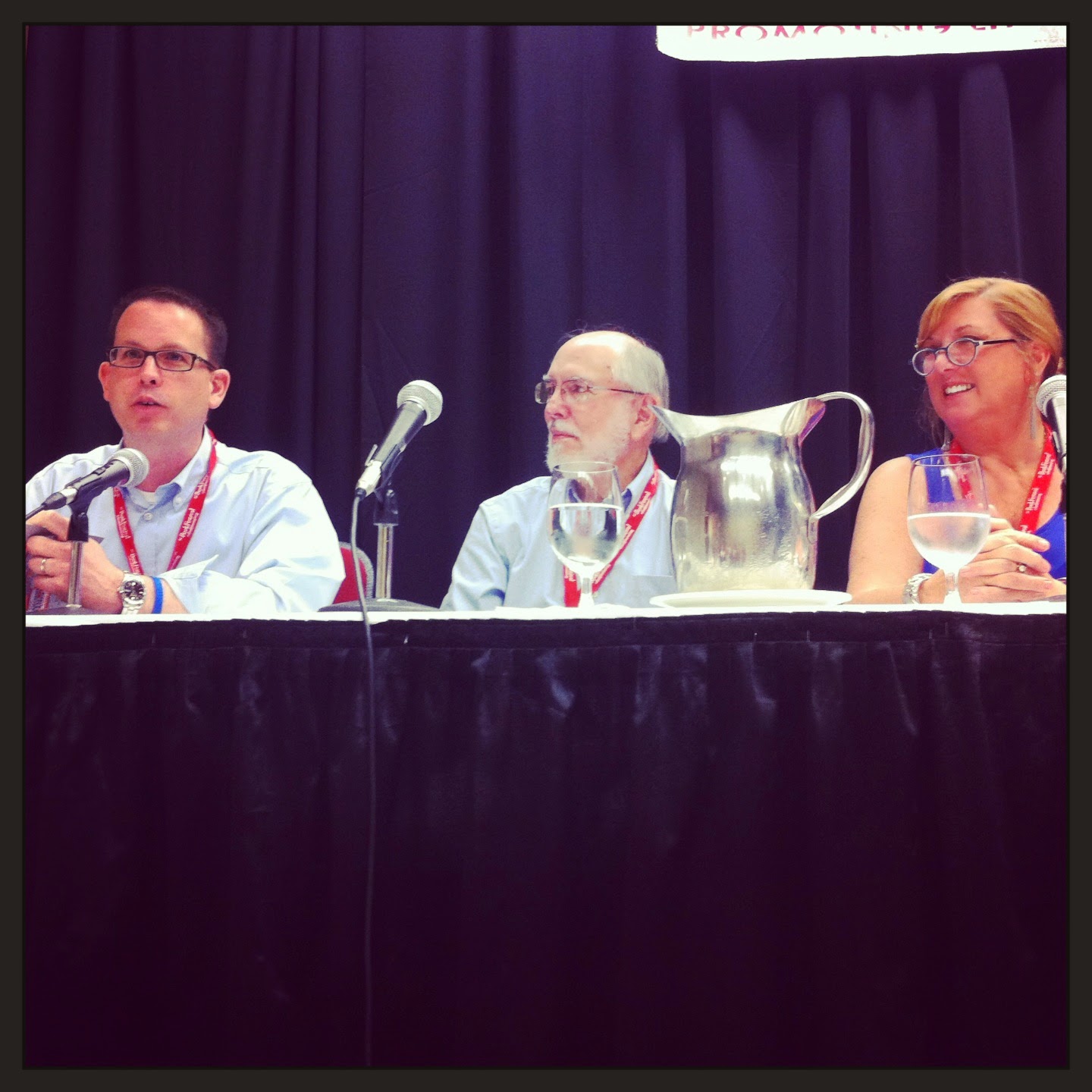 The main reason I went to the "A Sense of the Midlands" panel is seeing Ed Madden on the list.  I had read a chapbook of Nest during April for National Poetry Month, but he is also the editor of Out Loud: The Best of Rainbow Radio, the book that is now infamous in South Carolina as the freshman read that got USC Upstate reprimanded by the state government removing funding for their programs.  I really would have liked to ask about all that, but the timing didn't seem right.

A Sense of the Midlands is a book of poems and prose by writers from the middle of the state, focusing on sensory experiences.  It sounds like the literary community in the midlands is in a growth spurt, and that can only mean good things!

One of the things I learned at the SC Book Festival is how closely knit the southern community of writers is.  Everyone seemed to be happy to be there because they were there with friends.  Seeing George Singleton and Ron Rash joke around with each other was probably worth the entire trek down.

I went to two presentations George participated in, but I wish the SC Encyclopedia Guide to Authors had talked about more than that one volume.  None of the illustrious authors on that panel got to even talk about their own work!  Shame.  I did talk briefly to Marjory Wentworth afterward, because I wanted to know what it was like to be the Poet Laureate for a governor that does not believe the government should provide any funding for the arts.  In the most recent story, she gave the opening speech for Artisphere, commending it for being an example of donor-funded arts, not understanding that the tax-payer funded SC Arts Commission provided $19k to the event. It was an interesting chat. 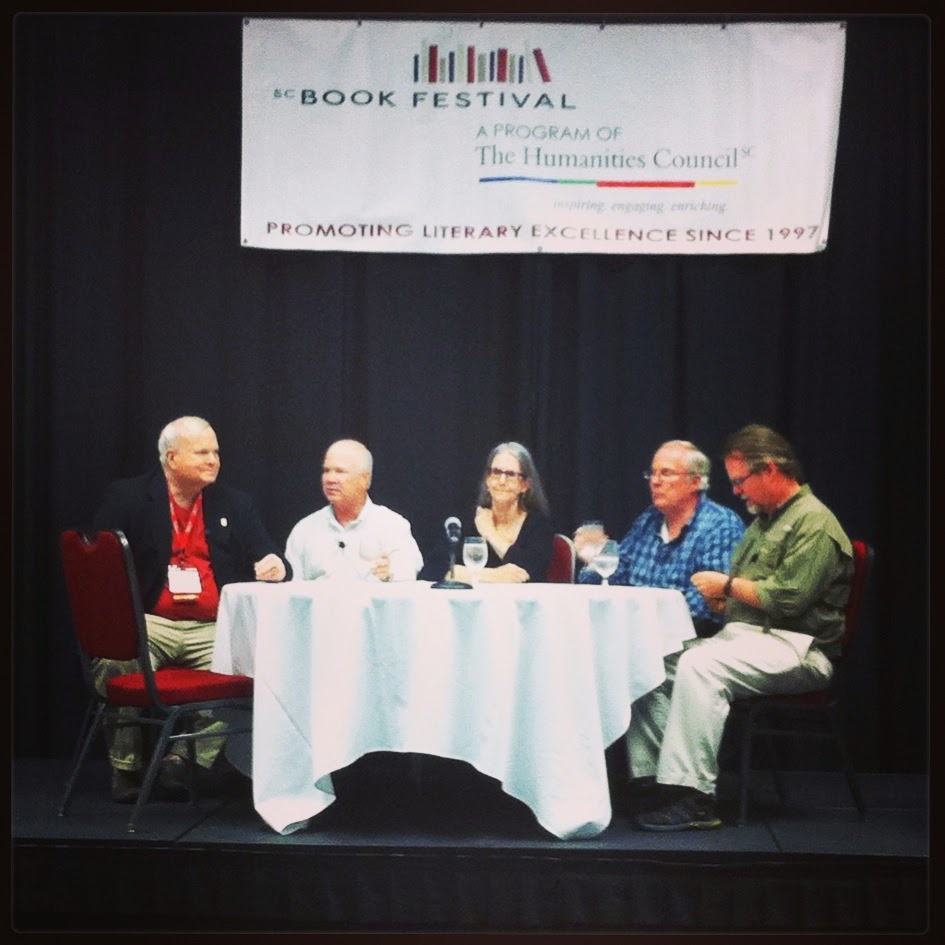 The largest presentation space was packed for the Conroy Family Roundtable.  I had rushed to finish the 768 pages of Beach Music so I could have Pat Conroy sign it, but that would have happened on Sunday, the day I didn't drive down.  I understand that Pat is there every year, so I'll just wait until next time.

The Conroy roundtable seemed to be related to a recent interview Walter Edgar did with the family for his podcast, as the interviewer kept referencing it.  The siblings were very open about their rough childhoods and the two siblings missing from the panel, and Pat let the rest of them talk most of the time.  How awful to discover that the abusive, controlling father in the books was a mild version of their own. 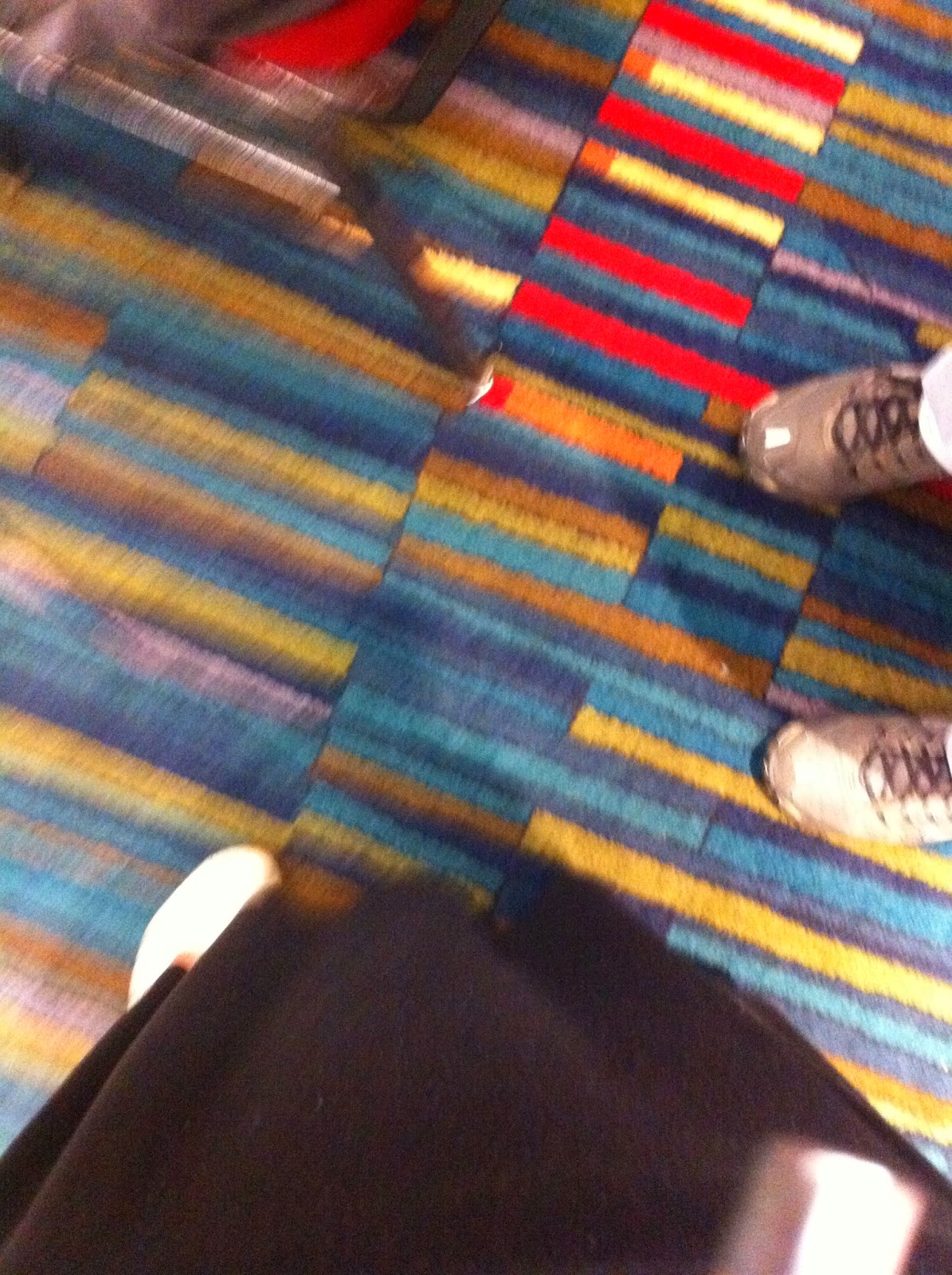 One of the things I enjoyed at the SC Book Festival is getting to talk to other readers.  There were a few people there I knew already from the university where I work, including one student who is a fantastic writer and hopefully will get to be  a presenter one of these years.

I got to meet two of my GoodReads friends who are in the "On the Southern Literary Trail" group with me.  That's a southern literature group that reads two books a month - one pre-1980 and one post-1980.  I hardly ever keep up with the group read but eavesdrop on the conversations and find great book recommendations.  It was great to see people who I've been talking books with all along!

The funny thing is, I accidentally captured that meeting on my iPhonish.  I'm the one in the dress.  And you know that's conference center carpet! 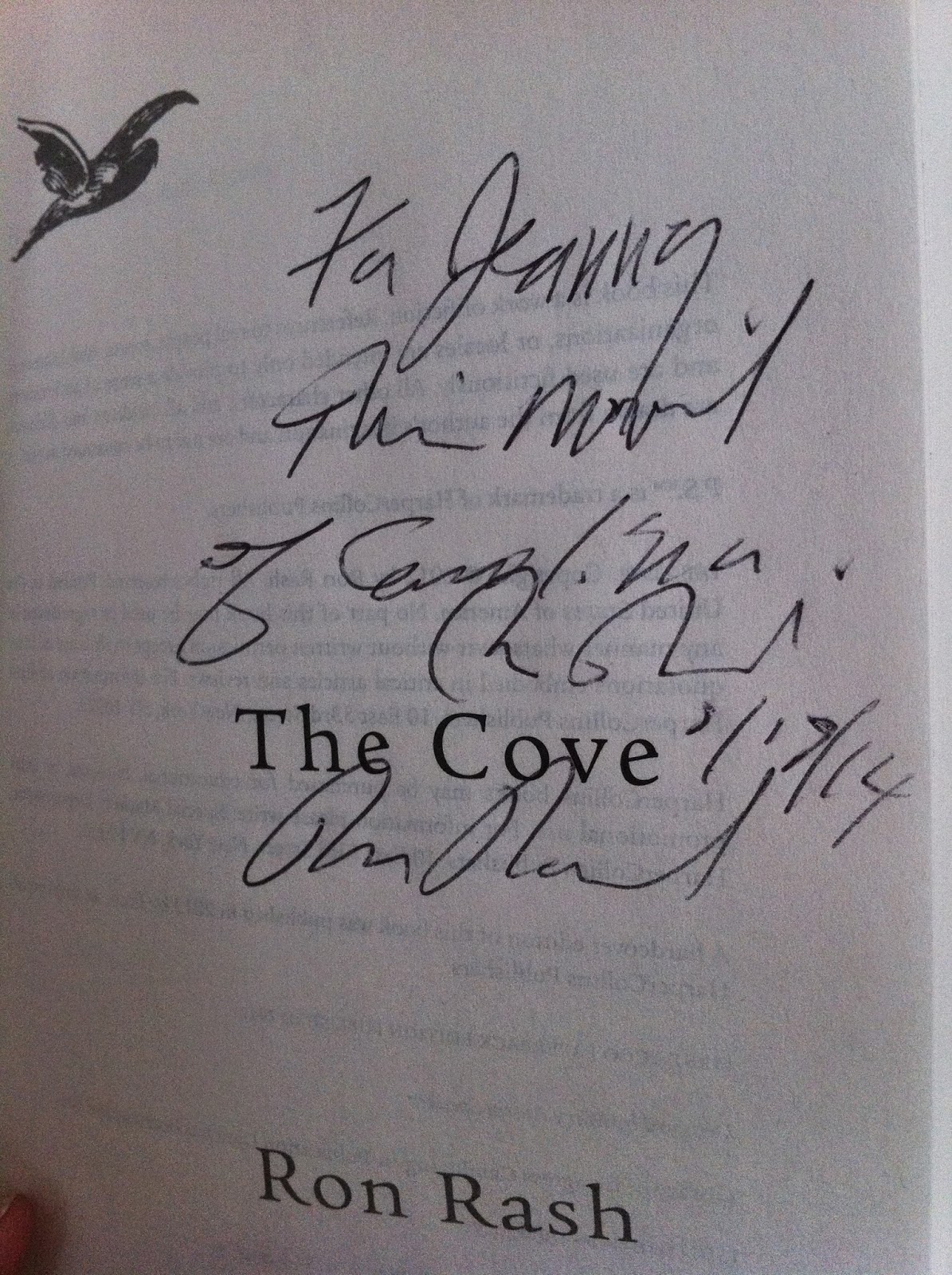 Of course one of the perks of a book festival is getting to interact with the authors.  I had only recently read a book by Ron Rash for the first time, and really wanted to hear him speak since he was new to me.  I didn't catch him actually reading any of his work, just laughing on a panel with George, but I did get him to sign the only brand new book I bought at the festival.

The other author that I got really interested in is Wiley Cash.  His work sounded interesting and I look forward to picking up a copy of A Land More Kind Than Home or This Dark Road to Mercy.

Next year, I'm sure I will be back to the SC Book Festival, which is usually the weekend after Mother's Day. But because I apparently do not enjoy driving two hours home and then getting up the next morning to drive two hours back, I might consider staying overnight to enjoy more of the festival.  I'm glad I went!
Posted by Jenny Colvin at 10:49 PM