Some Sisters and Some Givers 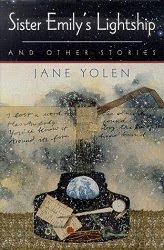 I dwell in possibility, Emily Dickinson writes in the first line of Jane Yolen's poet-meets-alien story called "Sister Emily's Lightship". In the story notes included in Sister Emily's Lightship and Other Stories, Yolen says she got the idea for the story after reading a Dickinson poem with a line about a "band of stars". A nice idea for a good story. I loved Emily's answer when asked by the alien about what she does in this world. "I tell the truth," she said. "But I tell it slant." This won the Best Short Story Nebula Award in 1998.

The Giver by Lois Lowry is a short dystopian YA novel that is one of the best stories I've read for a long while. In a review that I'm nearly finished with, I call it a "thought experiment". The story inspires a person to think about what things could be done to make sure that we humans treat each other better, what the consequences of those things might be, and ultimately what kinds of things are people willing to sacrifice to avoid pain. The society in the story is extreme. No pain allowed; but also, no joy. Puberty causes conflict, so the moment a citizen has "stirrings", he or she is put on pills to curb the effects. All kids are treated exactly the same. When they are little, they are given comfort objects, when they are a certain age, they are given a bicycle, etc. There's no room in this society for people that don't fit. Those people are "released", but no one in the society knows for sure what that means.

When Jonas turns twelve, he's given his life's work assignment. He's given a very special job - to receive society's past memories, full of the pain and joy they contain, and he'll see things for what they really are. He'll understand everything that the rest of society has been protected from. Terrific book. Very happy that my 12 year old daughter read and discussed it in school. In fact, she gave me this book for Christmas. How cool is that?

Theodore Sturgeon also expresses a sort of disdain for the society he finds himself in, or at least the main character in his famous story, "Slow Sculpture", does. It's a good story about an innovator who has devised a cure for cancer. He's visited by a woman that needs his procedure. The most striking aspect of the story is a very large bonsai tree in the courtyard of his home which becomes an object of contemplation for the characters. In that contemplation lies Sturgeon's point, which is something like: "Why don't people listen more to the smart people?" The solution offered is that the smart people ought to shape society the same way a bonsai tree is shaped. Slow sculpture. The story won both the Hugo and Nebula Awards in 1970/71. 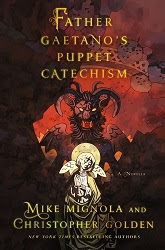 Last up this week is "Father Gaetano's Puppet Catechism" by Mike Mignola and Christopher Golden. Mike Mignola is the creator of Hellboy. I haven't read any Hellboy comics, but have seen and liked some of the art, and have seen and liked very much Guillermo del Toro's two movies. I listened to this one, since it arrived at SFFaudio for review. Nick Podehl narrated. I see that the description of the novella at Amazon says that it's an "illustrated novella", so I'll have to check out the art when I run across a copy. In short, it's a good novella about an Italian orphanage in World War II. Father Gaetano and the nuns at the orphanage, in an effort to connect with the children, makes use of a puppet stage that had been abandoned in the basement. He uses the puppets to teach Bible stories, first painting them to match the characters they are to portray. The problem is, these puppets come to life at night, like we know puppets do, and they take on the persona of the Biblical characters they were painted to resemble. It wasn't the best idea to paint one as the fallen angel Lucifer.

Alright Jenny - Goodreads shows you at 5 books, and I am now at 7 stories! Doing a touchdown dance that I designed my very own self.