Planet Hopping, with Love and Without

Stories Read:
"The Bone Flute" by Lisa Tuttle
A World Out of Time by Larry Niven, contains "Rammer" 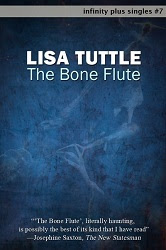 "The Bone Flute" is a short story by Lisa Tuttle that won the Nebula Award for Best Short Story in 1982. One of the reasons I enjoy working through lists is that I'll read stories that I wouldn't normally read, and this one falls into that category. I'm not sure why, but the title "The Bone Flute" evokes "fantasy" to me, so I was surprised when the story opened in a bar on a space station. There the female protagonist watches a man perform an erotic dance, then meets him afterward. She's a trader, and is planning to make a trip to a planet that has had little contact with other worlds. Her attraction to the man is strong, so she offers to bring him along. The planet has a reputation of the most incredible music... and the rest is to be discovered for yourself. I found this story on Amazon for the Kindle for 99 cents. 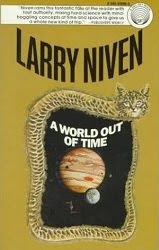 Second up this week is "Rammer" by Larry Niven, which was part of a novel I read for a discussion on the SFFaudio Podcast. The novel is called A World Out of Time, and "Rammer", originally a stand-alone short story, was the first chapter of the book. Quick description: a man wakes up in the year 2100-something after being frozen in 1970. He's awakened by The State, who wants him to fly a spaceship alone to some potential colony worlds, then return.

For me, the short story was the best part of the novel, but, as Jesse and Tam pointed out to me on the podcast, the book is full of ideas, and that's great.

Since I read "Turn of the Screw" by Henry James, I've been very interested in the concept of ambiguity in fiction. This is an illustration of that concept. At the end of "Rammer", the main character says where he's going to go next: the galactic hub, and maybe the Clouds of Magellan. Then the story ends, leaving the reader a sense of wonder. The novel takes off from there, and though I liked the continuing story, I liked the sense of wonder the original story left me with better. I can certainly see the value in leaving the story just as it was.

A short update this week! I better do one of two things - get on the ball and read a bunch this week, OR employ Tam to send Jenny some thousand page Peter Hamilton novels. Great North Road, Jenny. Great North Road!

11 stories so far for me this year, and I'm loving every minute of it.

Next up: "The Dog Said Bow-Wow" by Michael Swanwick