Stories Read:
"The Dog Said Bow-Wow" by Michael Swanwick
"The Wind from a Dying Star" by David D. Levine
"The Guy with the Eyes" by Spider Robinson 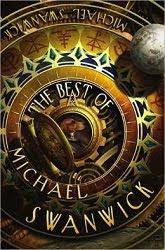 How do I categorize "The Dog Said Bow-Wow" by Michael Swanwick? Steampunk with talking dogs? The story appears in an anthology called Re-wired: The Post-Cyberpunk Anthology, edited by James Patrick Kelly and John Kessel. So it's post-Cyberpunk... It also appears in an anthology called This is My Funniest: Leading Science Fiction Writers Present Their Funniest Stories Ever, edited by Mike Resnick, a book I clearly need to get my hands on. It is definitely funny.

The story takes place in a Victorian-like future, after a war between humans and artificial intelligences. The humans won. Sir Blackthorpe Ravenscairn de Plus Precieux (or "Surplus" for short) is a genetically engineered talking dog who, with his sidekick Darger, have a con in mind. Entertaining, funny, and very peculiar. 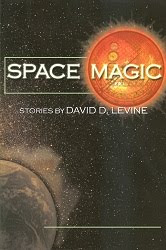 "The Wind from a Dying Star" is the first story in David D. Levine's collection called Space Magic. It's an interesting tale about some interstellar explorers that I thought were some kind of energy beings, but I found this note by Levine that tells me that the people in the story are "actually solid matter, a mix of biological and technological materials, though they use 'fields' to manipulate things and 'motivators' to get around." They are the further evolution of humans, actually, and I will read the story again in that context. I'll be reading the rest of this collection next week, hopefully, which hardly seems fair to Jenny! I received the eBook version of Space Magic to review over at LibraryThing as part of the Early Reviewers program, which makes me ridiculously happy.

Here's a quote I really like:
"Shared pain is lessened. Shared joy is increased. Thus do we refute entropy."
--Spider Robinson

That is a very short description of Spider Robinson's Callahan stories, and why I adore them. In world where we hear much bad news, these stories serve as a reminder of how we humans ought to treat each other. "The Guy with the Eyes" is the first Callahan story, published in Analog Science Fiction by Ben Bova in February, 1973. Callahan's Place is a bar where people bring their problems, and others are there to listen and share their pain. There are also puns. Ben Bova's Foreword in the paperback version of Callahan's Crosstime Saloon is called "Spider Robinson: The SF Writer as Empath". Indeed! Terrific stories. "The Guy with the Eyes" is five-star.

This puts me at 12 stories for the year so far. At this rate, I will reach only 168 and almost a half. I am pacing myself like Lance Armstrong in the Tour de France. Except without the drugs. Unless you count coffee as a drug, in which case I better schedule my interview with Oprah!