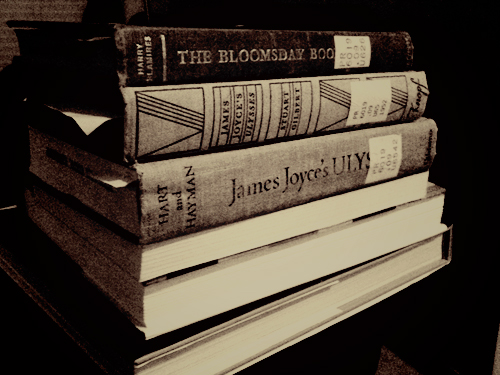 These three books contain all the answers to the James Joyce universe. Okay, probably not, but they have been eye-opening to me.  I just picked them up yesterday and sat down to see what they had to offer tonight.  They are each different, and I will keep reading at least two of them as I read and listen to Ulysses by James Joyce.

I have read each book's information on Part 1 of Ulysses - Telemachus, Nestor, and Proteus; and in that short time have figured out what each book's strength is and what order I want to use them in.  I tend to be methodical like that, but the patterns help my brain wrap around this very overwhelming text.  On the one hand, I could just decide to sit back and enjoy what I'm hearing, with an occasional laugh about a cheese sandwich, but that seemed like a failing somehow.  I don't mind the extra work, and while I won't absorb everything these books say, each has really had something to offer towards the context or interpretation of what I was reading.

On the top of the pile is The New Bloomsday Book, by Harry Blamires, is probably the most straight-forward of the three.  I currently have the first edition, just called The Bloomsday Book, but the 3rd edition is on its way, and I doubt it is very much different.  Blamires does a good job of summarizing the action of the story, but rarely includes any actual quotation of the text.  I can see someone just reading this and not getting what makes Ulysses great, because the prose and rhythm of the writing is part of what sets the book apart.

Even better, each chapter starts out with an explanation of the parallel section of The Odyssey.  I mentioned before that I read The Odyssey over ten years ago, but the brief contextual work Blamires does is enough to bring another level of understanding to what Joyce may have been thinking or planning.

So far, he has really emphasized the symbolism of water = fertility.  I'm not sure I see it, but he really wants me to believe that at the very least, Stephen Dedalus is using and understanding it in that way.  Blamires does seem to focus on the symbolism of the scenery and items in the story - the shaving bowl, the ocean, the bridge; and then finds their counterpart in the Odyssey.  I don't mind this.  I'm not sure Joyce always intended these things, but it is an interesting perspective.

I also enjoyed the parentage chart at the beginning, of both the Bloom and Dedalus families.  That would have been helpful the first time through chapter 4 or so, when I didn't understand who Simon was.

In my companion reading, I start with the Blamires.  It fills me in on details that I may have missed in the strange consciousness stream of Dedalus and Bloom by summarizing the story, and helps get me reoriented.

Second in the pile, and second in my companion reading, is James Joyce's Ulysses: A Study

by Stuart Gilbert.  I will start out by openly admitting that I skipped to page 101 in this book, which is where the companion chapters start.  The first 100 pages of the book are an introduction to Ulysses.  I can't decide if I should read them now or wait until I am done.  A lot of "introductions" to literature that I have read in the past have spoiled surprises, so I tend to go back to them.  Anyone with another recommendation should let me know!

.  I still have bits of that in my head from high school, and it helped link the character into Ulysses in a way my brain had not accomplished yet.  A reminder of Dedalus's complete and utter idealism, partnered with a dissatisfaction in his own life.  There have been constant references back to Portrait, serving as contrasts the Stephen of then vs. the Stephen of now, particularly since he has had more religious conflict and lost his mother in the meantime.

Part of the fun of the Gilbert is that at the beginning of each companion chapter, he includes the scene, the hour, the art, the symbol, and the technic.  For Telemachus, for instance the scene: the tower, hour: 8 am, art: theology, symbol: heir, technic: narrative (young).  It is a fun exercise but sometimes Gilbert reads like he is stretching the contents to fit within the symbolic structure he has selected.  Most of the time it works out okay.

In each chapter, Gilbert provides a summary of sorts, but with frequent quoting and footnoted research that break up the flow of the writing.  Sometimes I go back and re-read it, and sometimes I skim and let it float over my head.  He even sometimes discusses different translations of the original Greek in The Odyssey and what differences in meaning that would attribute to Ulysses.  It can be a bit intense, but I like the combination of the scholarship with the summation.  Read right after the Blamires, it is like singing a repeat on an aria (you know, where you embellish it?).  It seems to me that if both Blamires and Gilbert zero in on the same passage as being important, I truly should pay attention to it.  That helps a lot, more than I expected.

On the bottom of the pile, and last consulted in my companion reading, is James Joyce's Ulysses: Critical Essays

, edited by Hart and Hayman.  They took a unique approach and each companion chapter was farmed out to a different scholar, so that they could come at a section from a fresh perspective.  Unique, but not always helpful, if I'm being honest.  The focus of each scholar is different, and sometimes it feels like they are really stretching some ideas to try to seem more insightful than even this complicated text demands.

In Telemachus, for instance, Bernard Benstock is talking about the changing narrator, and how the narrator's tone and empathy changes depending on which character is being talked about.  That, I could see.  He went on to discuss examples of how the words used to describe the characters matched their characterization in tone and roundness... the actual words, and how your mouth forms them.  Matching the characters.  Wow.  I don't know.  If Joyce did this, he was a bit obsessive.  I like to think that if this is true throughout the book (and I'm not sure it is), it was more of an unconscious zone of mood or tone in writing.

The Proteus chapter was fascinating.  It is a hard chapter to read in Ulysses, because even the scholars aren't quite sure what all the little bits of randomness mean or refer to or are directed to.  Overarchingly, Epstein, who authors this chapter, tries to argue that Joyce simultaneously exists as Proteus within the story, while writing Dedalus to be him, and that he has done so ever since Portrait:

"...He is beginning to want to know the deathless Proteus by holding fast to all his changing manifestations.  He seeks fluid, wavelike forms that will express immutable laws through infinite mutations, the clarity of eternal forms through their opaque but ineluctable modalities. In this chapter he doesn't succeed.  Stephen Dedalus never succeeds.  Only Joyce will succeed.  The chapter, written by Joyce and brilliantly successful, shows us Stephen still in the dark amid the blaze of Joyce's noon."

It is an interesting parallel, and Epstein goes on to say that Bloom may embody who Joyce/Dedalus strives to be without knowing it.  I guess we'll see.

That is one thing about this companion book that is endlessly frustrating - it is full of spoilers.  It assumes you know what happens in the end (wish I hadn't seen that paragraph, because I didn't know!), and everyone wants to draw parallels with what happens in the Circe chapter, which isn't until chapter 15.  At this point, I'm looking forward to getting there, because all the scholars are excited about it.

I feel like I have written this as I've been processing what I read this evening, so I hope it isn't too scattered.  It is clear that a reader could go down the rabbit hole in comprehending Ulysses, and I hope I haven't gone too far!

Email ThisBlogThis!Share to TwitterShare to FacebookShare to Pinterest
Labels: ulysses