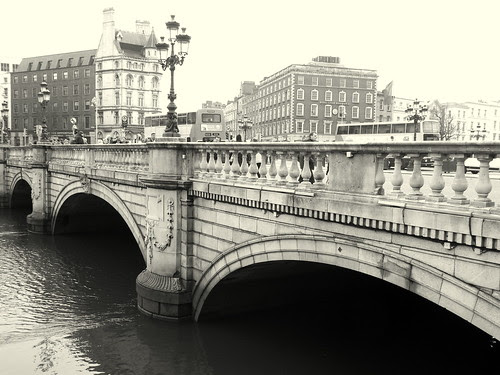 I've been on a bit of an extended weekend and have only done piece-meal listening, but finally made it about a quarter in, which means I'm just about finished with Chapter Eight: Lestrygonians.

The audio started getting confusing around the time of the carriage ride to the funeral, and I had to go back and look at some character lists. I should have the readers guides in-hand tomorrow, which will help a lot too! Simon Dedalus is Stephen's father, and I don't think it was happenstance that Dedalus Sr. and Bloom share a carriage ride, so they must be connected in some way. There is a long conversation about death, as is expected when heading to a funeral.

Bloom thinks about death more later on. He runs into an old flame who tells him about a woman who has been hospitalized for a difficult birth. He was handed an evangelical tract along the way, and his thoughts go in circles being "washed in the blood" and the cycle of death and life, particularly since back then so many women and children died in or around childbirth. His own son only lived a few days.

-The headlines interspersing the story in chapter.. 7, or 6, hard to tell with the audio. "Onehandled adulterer" gets repeated several times.

-When Bloom is contemplating who can own the river, Joyce throws in another poetic description of water, which he seems to love.
"His eyes sought answer from the river and saw a rowboat rock at anchor on the treacly swells lazily its plastered board."

-At one point he is thinking about what would catch someone's eye in an advertisement, and says
"Smart girls writing something catch the eye at once. Everyone dying to know what she's writing."
I liked that for different reasons, since some of my friends are still writing real letters, but it also points to how women keep showing up in his thoughts.

-Random funny bit:
"Mayonnaise I poured on the plums thinking it was custard."
I lost track of why/how that came up. Plums come up multiple times though. Do they mean something? This is one idea I'll look up in the companion books!
Posted by Unknown at 3:21 PM