My major project for National Poetry Month is a book I haven't finished yet, so it's weird to not have posted as much about poetry as I usually do. And most of the poetry I picked up otherwise wasn't poetry I connected with well. Some years are like that! I removed the book covers from the one book I reread twice from the image so I could get a better square, but they are in the list below. 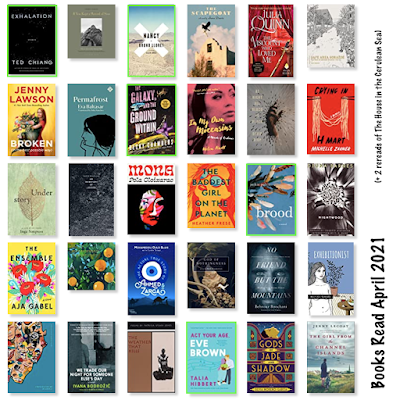 82. The Girl from the Channel Islands by Jenny Lecoat ⭐️⭐️⭐️⭐️
83. Gods of Jade and Shadow by Silvia Moreno-Garcia ⭐️⭐️⭐️⭐️
84. Act Your Age, Eve Brown Talia Hibbert ⭐️⭐️⭐️⭐️⭐️
85. The Weather That Kills by Patricia Spears Jones ⭐️⭐️⭐️⭐️
86. We Trade Our Night for Someone Else's Day by Ivana Bodrožić, translated by Ellen Elias-Bursać ⭐️⭐️⭐️⭐️
87. Exhibitionist by Molly Cross-Blanchard ⭐️⭐️⭐️
88. I Would Leave Me if I Could Halsey ⭐️⭐️⭐️
89. No Friend but the Mountains by Behrouz Boochani, translated and transcribed by Omid Tofighian ⭐️⭐️⭐️⭐️
90. Nightwood by Djuna Barnes ⭐️⭐️⭐️
91. The Actual True Story of Ahmed and Zarga Mohamedou Ould Slahi by Larry Siems and Mohamedou Ould Slahi ⭐️⭐️⭐️⭐️
92. God of Nothingness by Mark Wunderlich ⭐️⭐️⭐️
93. Violet Bent Backwards Over the Grass by Lana Del Rey, read by Lana Del Rey ⭐️⭐️⭐️
94. The Ensemble Aja Gabel ⭐️⭐️⭐️⭐️
95. The Baddest Girl on the Planet by Heather Frese ⭐️⭐️⭐️⭐️
96. Brood by Jackie Polzin ⭐️⭐️⭐️⭐️⭐️
97. Mona by Pola Oloixarac, translated by Adam Morris ⭐️⭐️⭐️
98. The House in the Cerulean Sea by T.J. Klune ⭐️⭐️⭐️⭐️⭐️
99. The House in the Cerulean Sea by T.J. Klune, narrated by Daniel Henning ⭐️⭐️⭐️⭐️⭐️
100. Understory: a life with trees by Inga Simpson, narrated by Inga Simpson ⭐️⭐️⭐️⭐️
101 An Inventory of Losses by  Judith Schalansky, translated by Jackie Smith ⭐️⭐️⭐️
102. Crying in H Mart by Michelle Zauner ⭐️⭐️⭐️⭐️
103. At Night All Blood is Black by David Diop, translated by Michelle Moschovakis ⭐️⭐️⭐️⭐️
104. The Galaxy, and the Ground Within by Becky Chambers ⭐️⭐️⭐️⭐️⭐️
105. In My Own Moccasins by Helen Knott ⭐️⭐️⭐️⭐️
106. Safe Area Gorazde by Joe Sacco ⭐️⭐️⭐️⭐️
107. Broken by Jenny Lawson ⭐️⭐️⭐️⭐️
108. Permafrost by Eva Baltasar, translated by Julia Sanches ⭐️⭐️⭐️
109. The Viscount who Loved Me by Julia Quinn, narrated by Rosalyn Landor ⭐️⭐️⭐️⭐️
110. The Scapegoat by Sara Davis ⭐️⭐️⭐️
111. Nancy by Bruno Lloret, translated by Ellen Jones ⭐️⭐️⭐️⭐️⭐️
112. If You Kept a Record of Wrongs by Andrea Bajani, translated by Elizabeth Harris ⭐️⭐️⭐️⭐️
113. Exhalation by Ted Chiang, narrated by Edoardo Ballerini, Dominic Hoffman, Amy Landon, and Ted Chiang ⭐️⭐️⭐️⭐️⭐️