This was a light month for new books in, since I was busy getting books from libraries for my New Zealand November project.

I have two physical books that came in during November, both from publishers. One asked me first and one just sent it (with a nice note telling me about a reading the author is doing in my city; smart move!) - can you guess which is which? 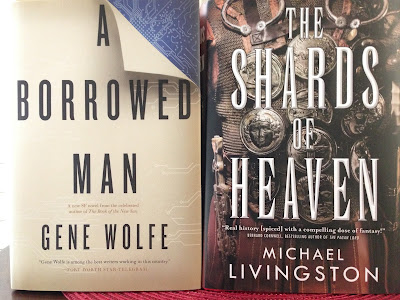 by Gene Wolfe
The Shards of Heaven

A Borrowed Man is a near-future where AIs may be checked out from the library. The Shards of Heaven is an alternate history from the classic era (or more to the point, fantastical history.)
Apparently Michael Livingston is a South Carolina author, and I'd read Shadow & Claw by Gene Wolfe previously.

A few titles I bought on Kindle:

by Matthew Mather
The Gardener of Baghdad

All three of these were Kindle deals, $1.99 or under, and sometimes I snag those if I think I may eventually read them. I had previously purchased the first volume in the Tearling series, so this is the second. I keep hearing about them, hopefully can try them soon!
Posted by Jenny Colvin at 5:44 PM