These piles represent the second half of (New Zealand) November and the beginning of the last month of the year, where I know I will have more time to read over the holidays but the interlibrary loan deadlines happen early. So get ready. I actually had to take pictures in batches because I checked out and finished so many already, and then got a bunch more. 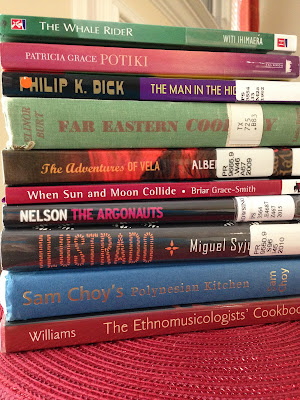 by Patricia Grace
The Man in the High Castle

by Elinor Burt
The Adventures of Vela

by Albert Wendt
When Sun And Moon Collide

by Briar Grace-Smith
The Argonauts

by Sam Choy
The Ethnomusicologists' Cookbook

The Williams, Choy, and Burt were research for cooking baking in Oceania, to coincide with my reading. The Burt was useless, more like mid-19th century processed food recipes with a few Polynesian ingredients like canned pineapple. I loved the Williams and will probably need to own it - each featured country also has a bibliography of recommended readings (usually ethnographies) and music to listen to. It was a great connection to my former life in an ethnomusicology grad program.

I went to the stacks to pull a few books from New Zealand. If you know the Library of Congress system at all, you know that literature is shelved first by country and then by author. I grabbed the Grace-Smith and Ihimaera but then just a few shelves away found the Wendt. I had a brief lapse where I forgot I wasn't including Southeast Asia in this year's big reading project; Ilustrado has been returned to the library and will wait for another year. I requested the Grace through interlibrary loan after the recommendation from a Goodreads friend.

I wanted to read the Dick before watching the television series, although now that I have finished the book and started the show, I know that they are vaguely related. One does not necessarily need to be consumed before the other. Ah well. It wasn't my favorite Philip K. Dick novel but it was fine. I finished the Nelson this weekend - this book I got through interlibrary loan after Carrie Brownstein mentioned it in the Q&A of her audiobook recording for Hunger Makes Me a Modern Girl. 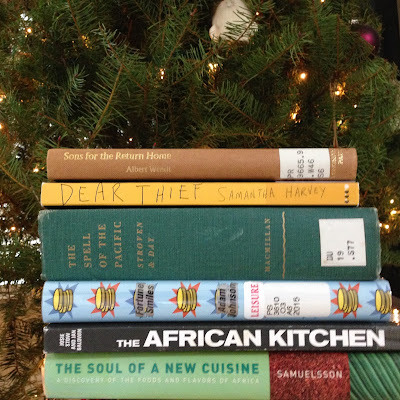 Sons for the Return Home

by Samantha Harvey
The Spell of the Pacific

by Josie Fison
The Soul of a New Cuisine: A Discovery of the Foods and Flavors of Africa

The bottom two cookbooks give a clue about next year's regional reading project. The Wendt and Stroven are both for reading Oceania - the large tomb is a result of reading a mention of it in a book I recently finished - Come on Shore and We Will Kill and Eat You All.  The Harvey was one of the many books listed in the Tournament of Books Longlist for 2016, and sounded interesting. I also hadn't heard of it yet, while many of their books were known to me.
Posted by Jenny Colvin at 12:00 AM