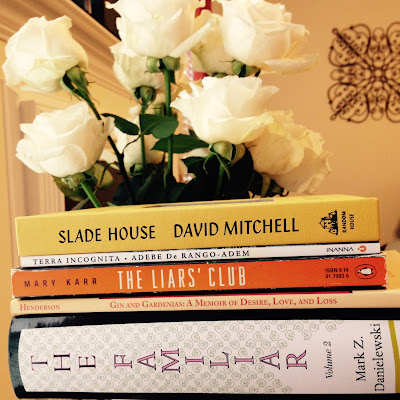 by Mary Karr
Gin and Gardenias: A Memoir of Desire, Love, and Loss: Poems

by Scott Henderson
The Familiar, Volume 2

Last month, I had Cherry by Mary Karr in my pile. I had been casually looking for her memoirs after reading her book on memoir, The Art of Memoir. After starting Cherry I decided I needed to read The Liars' Club first. I was diverted into the new location of a local used bookstore, and lo and behold, they had a copy of it. An upcoming episode of the podcast will include it, probably 44.

Some authors are in my top ten list, and I will buy anything new by them without reading reviews or knowing anything about it. Both David Mitchell and Adebe D.A. are on that list for me. David Mitchell is well known, best known for Cloud Atlas, and I was lucky to meet him at a reading last year before The Bone Clocks came out. Although I already read a review copy of Slade House, I pre-ordered this one as a first edition. It's a great ghost story with ties to his uber novel universe, particularly some of the story and characters in The Bone Clocks. Adebe D.A. is probably known to fewer readers. She is a Canadian-based poet who is currently in a PhD program, and I don't even know how I encountered her the first time. I love her work though so was excited for the new one!

Scott Henderson is a faculty member where I work, and I was excited to see his first book of poems come out. I went to the signing party the night all the storms were coming into town (the same that caused all the flooding) but haven't read any of the poems yet.

I read the first volume of The Familiar and some Facebook reading friends were all buying this the same day, so I went ahead and pre-ordered it too. I haven't started it but will soon. Danielewski is probably best known as the author of House of Leaves but The Familiar, this hybrid literary/graphic novel series, is supposed to number 27 volumes by the end.
Posted by Jenny Colvin at 12:00 AM