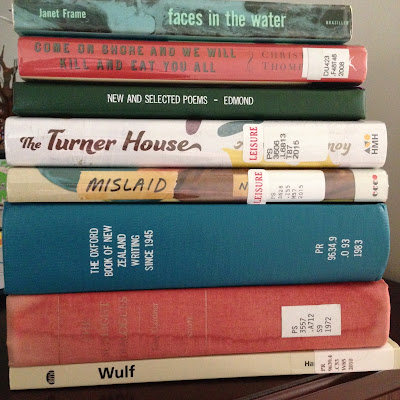 Faces in the Water

by Janet Frame
Come On Shore and We Will Kill and Eat You All: A New Zealand Story

by Nell Zink
The Oxford Book of New Zealand Writing Since 1945 (out of print, and I couldn't find a record in Amazon or Goodreads to link to! Thank goodness for libraries)
The Sunlight Dialogues

I have already posted about my New Zealand November project (see the post where I introduced it, and the first week report) so it should be no surprise that the majority of books I brought home from the library this past month are New Zealand related. That explains the Frame, the Thompson, the Edmond, the Oxford Book, and the Clayton. I've already read the Clayton (see my review) and the Frame (see my review) and have started the Edmond poetry. I am unlikely to read the entire Oxford volume but I like poking around in it and finding New Zealand authors I haven't heard of before.

The Flournoy is on the shortlist for the National Book Award (see my review) - I liked it but not as much as the two others I've read. The award is announced on the 18th and I'm skeptical that I'll be able to read all the remaining finalists. The Zink was on the longlist but I had it on hold at the library and went ahead and brought it home. I always meant to read her, but hadn't gotten around to it yet.

The Gardner was mentioned to me by a friend whose reading tastes I trust, but it hasn't made it past the end table yet.

Up next: maybe another update about New Zealand November? We'll see. I have to work the Sunday shift at the research assistance desk and that might cut into my time.
Posted by Jenny Colvin at 5:20 PM