"It does not do to leave a live dragon out of your calculations." 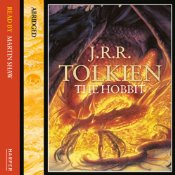 I am participating in the "The Hobbit" Read-a-Long instigated by Unputdownables.  As I previously mentioned, this is my first time reading The Hobbit! Some of my observations may seem like no-brainers, but I hope you can forgive my naive perspective.

Now that all the dwarves are back in their community because of the wine barrel escape orchestrated by Bilbo, he is an outsider once again.  At the same time, he is still in somewhat of a leadership role.  While the dwarves seem content to forget about the treasure and the mountain, he is eager to move forward:


"[Mr. Baggins] would often borrow Thorin's map and gaze at it, pondering over the runes and the message of the moon-letters Elrond had read. It was he that made the dwarves begin the dangerous search on the western slopes for the secret door."

And still they complain. What is the burglar for? Why isn't he spying?

Bilbo's poor-me response: "It is always poor me that has to get them out of their difficulties, at least since the wizard left. Whatever am I going to do? I might have known that something dreadful would happen to me in the end."

Later on there is a funny scene after Thorin declares it is time for Bilbo to earn his reward. He protests that he has already saved them twice, which is above and beyond his charge. I liked how he talked himself around into helping them, and talking himself down from being afraid.  He has pretty well-developed emotional intelligence, for a hobbit.