You knew it was coming, and 2012 is finally here!  The long months of list making, book swapping, and dreaming are over, and the reading may commence!

The official challenge is 52 books, but I have a feeling I'll do more than that.  Just in the books I've collected, they represent 57 countries, 5 of which have multiple books associated with them.  The official list of what I intend to read is in a Google Doc, but don't worry, I will review them as I go!  I will be taking a group photo as soon as the last few stragglers wander in.

I'm not scheduling too far out, because I want to be able to read based on whim, although I'm going to do a few of the group reads.  I'm also saving all my Caribbean books for the week I'll be on a cruise.  I should be able to knock out a good 5 countries in that week alone.

I will be starting with The Tiger's Wife by Tea Obreht, which was a finalist for the National Book Award and won the Orange Prize this year.  I bought the last signed copy from the Hub City Bookshop in Spartanburg, SC, where she had stopped on her tour.

In case I haven't mentioned it before, I am not the only person doing this challenge.  You can see a lot more by visiting the Tumblr account I set up, which will be where I'll pull all the blog posts people do as well as linking to other sites.  Alternately, you could just visit the group in GoodReads, where all members will be linking to reviews.  It isn't too late to join, if this idea intrigues you.  Making the list is great fun, but the reading will be even better.  I'm already plotting for an Around the USA challenge for 2013....

Here is a visual representation of the countries I will read books from, created on worldmapmaker.com 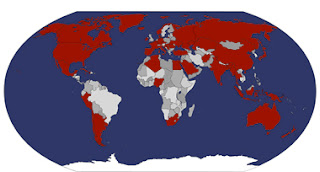