Every year I do a round-up of my 5-star reads. For the podcast's sake, these date from December 2019 through November 2020. On December 29th, the Best of 2020 podcast will post, featuring highlights from my list along with multiple guests sharing their top reads of the year. After December 31, I'll post my stats for the full actual calendar year. I love looking at those, but I could still read 10 books between now and then.

Unlike most book lists, these books are not necessarily published in 2020, simply read in that year.

Cover images are not the same order as below, apologies. If you are interested in my thoughts on any of these specific titles, your best bet is to find it on my Goodreads account - this list is Read2020 and sorted by rating. 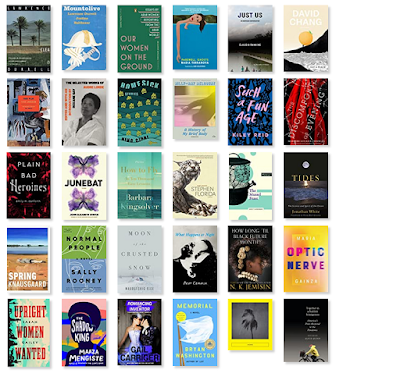 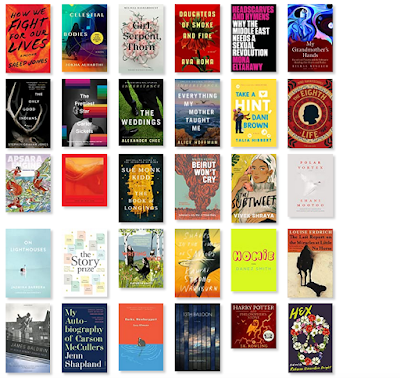 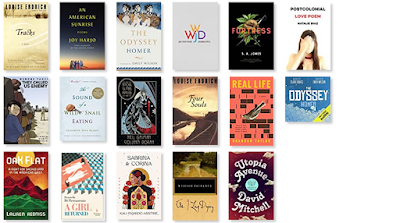 Celestial Bodies by Jokha Alharthi, translated by Marilyn Booth
Daughters of Smoke and Fire by Ava Homa
In the Shadow of the Banyan by Vadney Rattner
Our Women on the Ground by Zahra Hankir, ed.
Headscarves and Hymens by Mona Eltahawy, narrated by Mona Eltahawy
Beirut Won't Cry by Mazen Kerbaj
Home by Various, translated by Various (Two Lines Arabic poetry)

The Only Good Indians by Stephen Graham Jones

Olive, Again by Elizabeth Strout
Sabrina & Corina by Kali Fajardo-Anstine
Real Life by Brandon Taylor
Hex by Lauren Dinerstein Knight
Sharks in the Time of Saviors by Kawai Strong Washburn
The Subtweet by Vivek Shraya
Ducks, Newburyport by Lucy Ellmann
The Book of Longings by Sue Monk Kidd
The Prettiest Star by Carter Sickels
Utopia Avenue by David Mitchell
Polar Vortex by Shani Mootoo
What Happens at Night by Peter Cameron
Such a Fun Age by Kiley Reid
The Shadow King by Maaza Mengiste
Memorial by Bryan Washington

In the Dream House by Carmen Maria Machado
How We Fight For Our Lives by Saeed Jones
A History of My Brief Body by Billy-Ray Belcourt
Eat a Peach by David Chang and Gabe Ulla, narrated by David Chang
My Autobiography of Carson McCullers by Jenn Shapland