It's time for a long overdue post about my ongoing Around the World reading project. In 2019 I focused on Asia, with the hopes of finishing my goal to read a book from every country that I hadn't gotten to yet. I got pretty close, and definitely knocked out some books I collected back in 2012 when I started dreaming up this project. I gave up long ago on feeling the need to try to do it all in a year, because the more I get to know about some of these countries, the longer I want to stay. And sometimes I accidentally read a lot from a country I wasn't even trying to read (Japan is that country this year!) 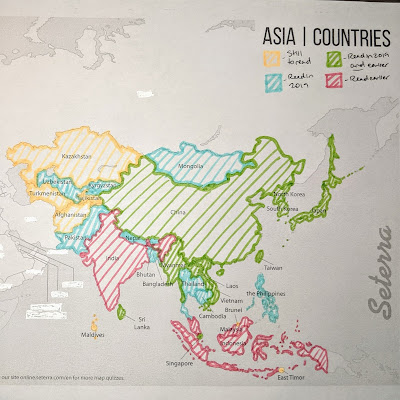 I've been keeping very careful track since 2012 (books read prior to 2012 are not "counted" in the project) so this map attempts to capture that - the orange is what remains to be read - Afghanistsan, Azerbaijan, East Timor, Hong Kong, Kazakhstan, The Maldives, Tajikistan, Turkmenistan (some of these I might be able to include during the focus on the Middle East, particularly the -stans), the blue is what I read for the first time in 2019 (and some, like Thailand and the Philippines, I read multiple books), the green I had read previously and also read additional titles in 2019, and the pink are countries I'd read previously but did not read more of in 2019. 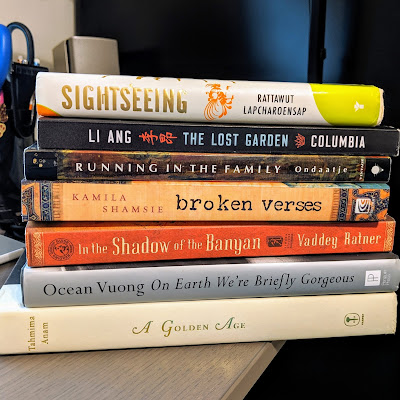 I do not have one picture with all the titles, because I used the library, both in print and for ebooks and audiobooks. But this first picture shows the titles from the major publishers that I had at home. Some I collected intentionally for this project, while others came in for other reasons. 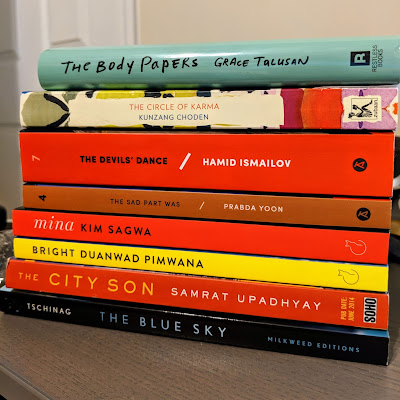 I was really impressed by the number of titles I found from independent presses this year. I subscribe to Restless Books, Two Lines Press, and Milkweed Editions, and both Restless and Two Lines sent me books from Asian countries that I was able to include. (Two Lines sent me Bright, I purchased Mina on sale.) Feminist Press also put out a book of short stories from the same author Two Lines published a novel from. Tilted Axis had several of the harder to find countries, which was a thrill. I applaud all these publishers and the work they are doing in translation and in English to raise up the voices we would not hear otherwise, truly impressive. 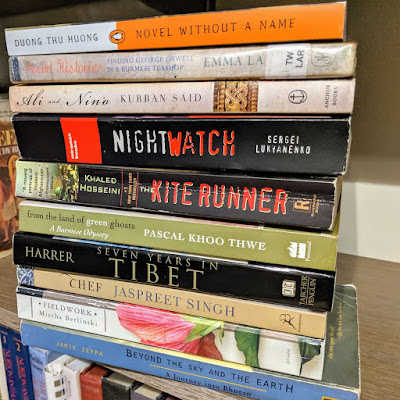 And this last picture are the books I did not get to. A few are Western titles by non-native authors, and those weren't as high priority as reading what we call "own voices" authors. I did want to get to the Lukyanenko because I try to include genre fiction when I can... it's just that it's not really set in Kazakhstan, but the author is from there. I read another book for Bhutan, Burma/Myanmar, Thailand, and Vietnam, and both Seven Years in Tibet and Chef are set in places that aren't "countries" but rather distinct regional locations with their own stories. I still want to read all these books but I did have reasons to prioritize some of the others. When I was dedicating time at the end of December to squeeze a few more in, I went first for books from countries I hadn't touched yet - Cambodia and Bangladesh. The book about finding George Orwell in Burma only makes sense if you read George Orwell's first novel based on his time in Burma, and I struggled to do so.

Here is the list. This is just the titles I read this year so those other titles I've hinted at on the map in green and pink can be found in Goodreads, as can reviews of all these titles. If you go to my profile, you can look at my books and search by title or view the shelves by location (all of these are under "Location-CountryName.")

Bhutan
The Circle of Karma by Kunzang Choden

Cambodia
In the Shadow of the Banyan by Vaddey Ratner

Myanmar/Burma
The Long Path to Wisdom by Jan-Philipp Sandlear

Sri Lanka
Running in the Family by Michael Ondaatje