When I travel to a new place for the first time, I usually look for interesting bookstores and libraries. When I knew I would be heading to Baltimore for a conference, that translated to Red Emma's and the George Peabody Library. (links go to my photos in Instagram) Some of the preparation for the trip, and some of the purchases made on the trip are represented in this pile of new books added in March 2017. 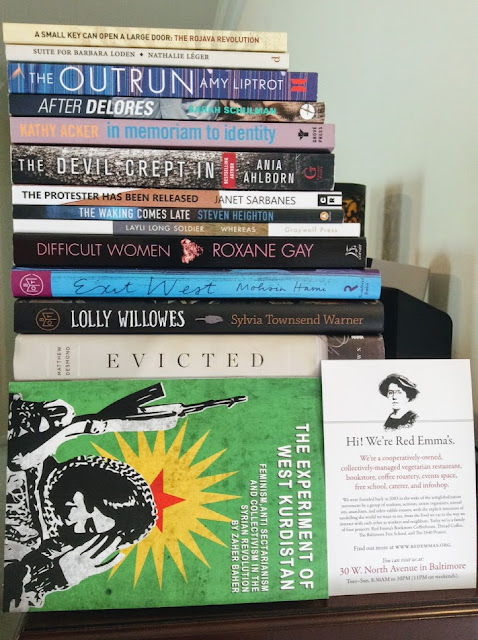 A Small Key Can Open a Large Door: The Rojava Revolution
Suite for Barbara Loden by Nathalie Leger
The Outrun by Amy Liptrot
After Delores by Sarah Schulman
In Memoriam to Identity by Kathy Acker
The Devil Crept In by Ania Ahlborn
The Protester Has Been Released by Janet Sarbanes
The Waking Comes Late by Steven Heighton
Whereas: Poems by Layli Long Soldier
Difficult Women by Roxane Gay
Exit West by Mohsin Hamid
Lolly Willowes by Sylvia Townsend Warner
Evicted: Poverty and Profit in the American City by Matthew Desmond
The Experiment of West Kurdistan by Zaher Baher

When I went to Red Emma's, and spent hours there along with a Goodreads friend, I decided to only buy books I'd never heard of. I was also hoping to find books that fit my borders reading project. Win/win! That's where the unnamed "small key" book comes from, along with Schulman, Acker, Sarbanes, and Baher.

I received my monthly subscriptions - Hamid and Warner from Book of the Month, and the Leger from Malaprops. I already had the Leger due to a previous purchase of all the Dorothy Project titles.

Soldier and Heighton were purchased for National Poetry Month, Gay since she was speaking at ACRL, and the Liptrot because I read a review copy and wanted it in my collection.

The Desmond was a gift from another reader in a book swap group, because she finished it and saw it on my tbr list. I won the Ahlborn from a Goodreads Giveaway.

For the audio list, the Finnegan, Murphy, Dickey, and Calonego were purchased during an Audible BOGO credit sale (and I had credits to spend!) I bought the Vowell to listen to on the way home from DC with my husband, and the Ness as a quick listen I initially thought I could discuss on the podcast. The Batuman is a review copy from Penguin Random House Audio.
Posted by Jenny Colvin at 5:13 PM