It looks like in all the year-end wrap up, I forgot to post about the books I added to my collection in December. Now that it's February, this is going to be a doozy.

First, the massive pile that includes subscription books, holiday gifts, and other such things. It is missing Ema the Captive by César Aira because I loaned it to a co-worker. 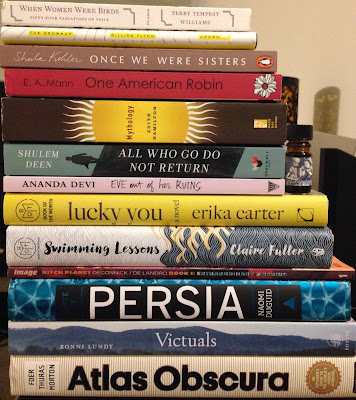 When Women Were Birds: Fifty-Four Variations on Voice by Terry Tempest Williams
The Grownup by Gillian Flynn
Once We Were Sisters by Sheila Kohler
One American Robin by E.A. Mann
Mythology by Edith Hamilton
All Who Go Do Not Return by Shulem Deen
Eve Out of her Ruins by Ananda Devi
Lucky You by Erika Carter
Swimming Lessons by Claire Fuller
Bitch Planet Vol. 1: Extraordinary Machine by Deconnick Delandro
Taste of Persia: A Cook's Travels through Armenia, Azerbaijan, Georgia, Iran, and Kurdistan by Naomi Duguid
Victuals: An Appalachian Journey by Bonni Lundy
Atlas Obscura by Joshua Foer

The Flynn, Carter, and Fuller were Book of the Month items (the Flynn was added to everyone's box for December), and the Kohler was from Malaprops for January. I received the Duguid, Lundy, and Foer for holiday gifts, and purchased the Williams, Hamilton, Deem, Devi, and Delandro with gift cards. The Mann came from a podcast guest who self-published his novel. I have already read and reviewed the Williams, Flynn, Fuller, and Delandro (see previous post.) 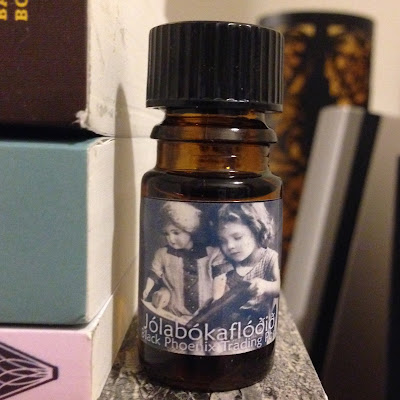 Did you notice a tiny bottle on that book stack? When I was in library school, some of my classmates and I were obsessed with the oil blends from Black Phoenix Alchemy Lab, with their complex, macabre, and literary descriptions. Their cohort, Black Phoenix Trading Post, also sometimes develops blends. I had to buy this one because of the title, Jólabókaflóðið, or the Christmas Book Flood. The scent is described as "A dribble of candle wax, distant hearth-smoke, a fleck of chocolate Yule log, and aged, yellowing paper bound by well-loved leather that has passed through many gentle hands." Purchases of the oil also went toward Project Night Night, which raises money for essentials for homeless youth. I also received a book from a local (to them) used book store, but forgot to include it in the stack. It was a very yellowed copy of The Wind in the Willows.

Over the holidays, I went to a local used bookstore to see if I could find anything matching my new reading goals, and to spread some of my book credit that is always burning a hole in my pocket. 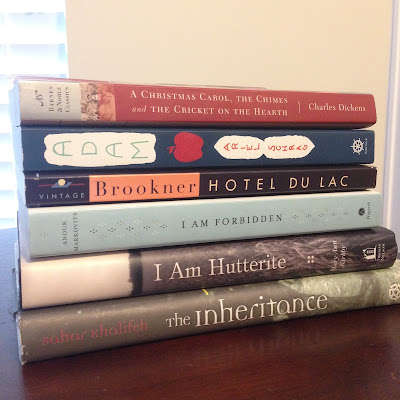 A Christmas Carol, The Chimes, and The Cricket on the Hearth by Charles Dickens
Adam by Ariel Schrag
Hotel du Lac by Anita Brookner
I Am Forbidden by Anouk Markovits
I Am Hutterite by Mary-Ann Kirkby
The Inheritance by Sahar Khalifeh

One day, someone in one of my Goodreads groups posted about the Dorothy Publishing Project, and their deal for a straight fee for all their books so in a weak moment, I bought them! They are so beautiful! 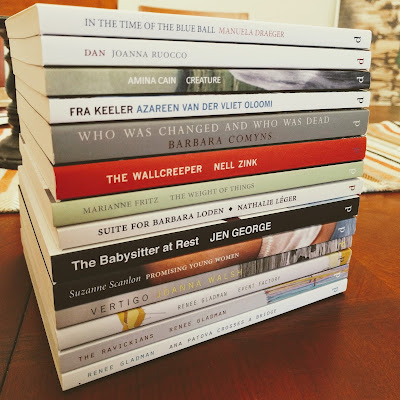 (See all titles on the Dorothy website.)
Posted by Jenny Colvin at 10:31 PM