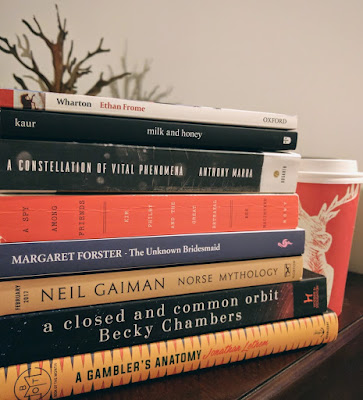 Ethan Frome by Edith Wharton
milk and honey by Rupi Kaur
A Constellation of Vital Phenomena by Anthony Marra
A Spy Among Friends: Kim Philby and the Great Betrayal by Ben Macintyre
The Unknown Bridesmaid by Margaret Foster
Norse Mythology by Neil Gaiman
A Closed and Common Orbit by Becky Chambers
A Gambler's Anatomy by Jonathan Lethem
Hope in the Dark: Untold Histories, Wild Possibilities by Rebecca Solnit (eBook; not pictured)

I have read half these books already! I bought the Marra and Macintyre from the tiny used book section at a local independent book store because I had read both of these and wanted to own them. I had read the Wharton and Kaur lately, so when I went to Book Depository to order the Chambers (since it doesn't come out in the USA until March plus I wanted the UK cover), I snagged these other two on a good discount. The Gaiman is a review copy, the Lethem is the November Book of the Month pick (guest selected by Anthony Bourdain!!), and the Forster was a used book with a cool cover and an indie press, so I'm a sucker. For a few days post-election, the Solnit was free from the publisher as an eBook, so I jumped. I have already finished that one as well.