I had to take two photos because I had a big pile of books on my desk at work that hadn't made it home yet, in fact some are work-related. 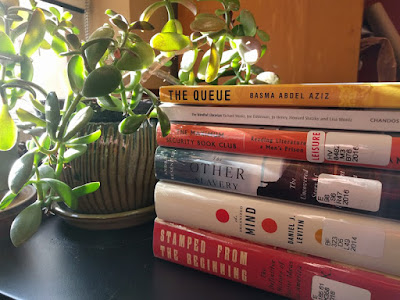 The Queue by Basma Abdel Aziz
The Mindful Librarian: Connecting the Practice of Mindfulness to Librarianship by Richard Moniz et al
The Maximum Security Book Club: Reading Literature in a Men's Prison by Mikita Brottman
The Other Slavery: The Uncovered Story of Indian Enslavement in America by Andrés Reséndezes
The Organized Mind: Thinking Straight in the Age of Information Overload by Daniel J. Levitin
Stamped from the Beginning: The Definitive History of Racist Ideas in America by Ibram X. Kendi 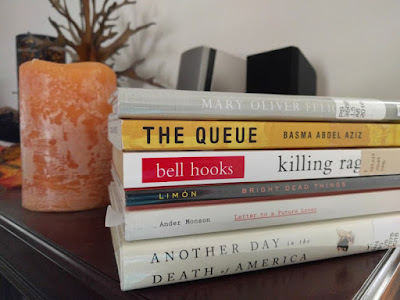 Felicity: Poems by Mary Oliver
The Queue by Basma Abdel Aziz (guess I brought this one home by the time I took a picture!)
Killing Rage: Ending Racism by Bell Hooks
Bright Dead Things: Poems by Ada Limón
Letter to a Future Lover: Marginalia, Errata, Secrets, Inscriptions, and Other Ephemera Found in Libraries by Ander Monson
Another Day in the Death of America: A Chronicle of Ten Short Lives by Gary Younge

Well, what can I say. These are not cheery piles. Some of them are reactions to the election, some were on the short or long list for the National Book Award for non-fiction, and are just now coming into the library. The Kendi took that particular award, so that might be a good place to start. The Oliver and Limón have already been consumed, as poetry can sometimes carry me through.

How are you holding up, post-election? Are you finding reads to carry you through? I'm hesitant to start many of these quiet yet, although I have already abandoned the Monson and Brottman.
Posted by Jenny Colvin at 10:44 PM