It is prize long list season, which has definitely had an impact on the books I get from the library. But there are other reasons for some of the books in these piles. 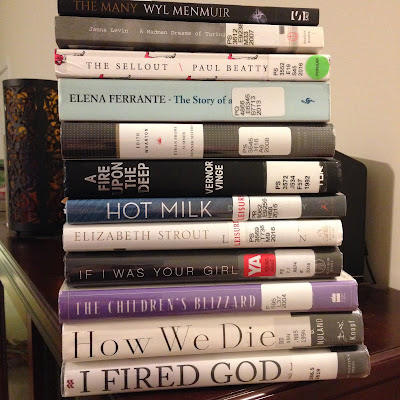 The Many by Wyl Menmuir
A Madman Dreams of Turing Machines by Janna Levin
The Sellout by Paul Beatty
The Story of a New Name by Elena Ferrante
Ethan Frome, etc.by Edith Wharton
A Fire Upon the Deep by Vernor Vinge
Hot Milk by Deborah Levy
My Name is Lucy Barton by Elizabeth Strout
If I Was Your Girl by Meredith Russo
The Children's Blizzard by David Laskin
How We Die: Reflections of Life's Final Chapter by Sherwin B. Nuland
I Fired God: My Life Inside - and Escape from - the Secret World of the Independent Fundamental Baptist Cult by Jocelyn Zichterman
Not pictured: The North Water by Ian McGuire
Not pictured: My Antonia by Willa Cather

The Strout, Levy, Beatty, McGuire, and Menmuir were all on the Man Booker Prize Long List, and so far I've read three of the four. The Beatty is on the shortlist but it is going to take something to get me back to it. Vinge is the Sword and Laser pick for September. I requested the Zichterman, Nuland, and Russo based on reviews by others (usually Litsy). The Wharton, Laskin, Cather, and Levin are required readings for some of the classes I'm librarianing for. I don't really need to read them, but find that knowing what they are starting from makes me more helpful with their research. I want to read the rest of the Neapolitan novels by Ferrante but so far all I have done is bring book two home. 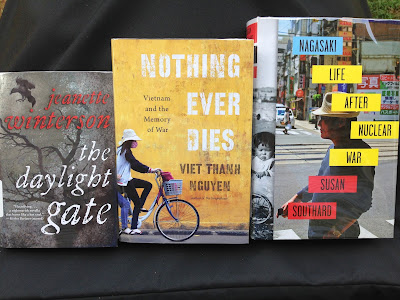 The Daylight Gate by Jeanette Winterson
Nothing Ever Dies: Vietnam and the Memory of War by Viet Tranh Nguyen
Nagasaki: Life After Nuclear War by Susan Southard

A few days after taking the initial photo so I could return some of my books, I checked more out. The National Book Award long list was announced between then and now. I am currently reading The Sympathizer for my in-person book club, and the same author wrote the memoir Nothing Ever Dies, which was named to the longlist. With so many titles about politics, I was happy to see a memoir! I'm hoping to finish both by book club to contribute even better to the discussion. I saw the Southard mentioned somewhere, maybe Instagram, and thought it would be a nice additional read to the book club discussion I'll lead in 2017, for The Dictionary of Mutual Understanding. The Winterson is on the shortlist of Winterson books I have yet to read, and I thought it sounded spooky in the right way for October. I'll stick it in a pile until then... not difficult to do.
Posted by Jenny Colvin at 2:50 PM