Review of Eleanor by Jason Gurley 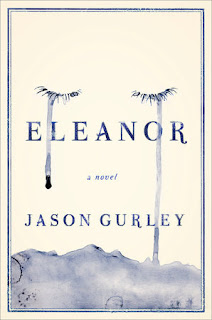 When a terrible accident claims the life of Eleanor’s twin, her family is left in tatters, and her reality begins to unravel, dropping her in and out of unfamiliar worlds. When she returns to her own time and place, hours and days have flown by without her. One fateful day, Eleanor leaps from a cliff…and vanishes. In a strange in-between place, she meets a mysterious stranger who understands the weight of her family history: Eleanor’s twin wasn’t the only tragic loss. And unless Eleanor can master her strange new abilities, she may not be the last.

I finished this novel almost a month ago, but already had a moment where something I read in another book triggered a memory of a scene in this book, and it took me a moment to track down the connection. There are parts of the writing in this novel that are so vivid, and so unusual, that they tuck themselves away, waiting for another moment to come to mind!

The fantastical elements of this novel don't really start until around page 80, but really they are what make it a special read. Up until then, it is more of a novel of a family and the loss of a child, but then it morphs and shifts into a much more engaging story of the afterlife and twin connections, grief and healing, and the power of dreams.

The writing of these other worlds, other presences, is descriptive and beautiful. The real world is logically sad and difficult for Eleanor.

Set in the dreary northwest, specifically the Oregon coast, I was surprised at the amount of ocean swimming the characters did. I grew up in Oregon an hour from the ocean and we were told NEVER to swim in it, the dangerous rip tides/currents being ever-present. Also the water is freezing cold all of the time. So I kept being pulled out of the novel to wonder if there are people out there swimming along the Oregon coast - but surely they aren't rowing out from the shore - the waves are pretty dramatic. The author lives in Oregon now; what does he know that I do not? I just can't reconcile it. Surely the coast is not so different from 15 years ago. This is just a little complaint from a longtime Oregonian.

This is the novel that The Lovely Bones wished it was. Not exactly the same premise but the story as a whole seems better connected and more realistic despite the fantastical elements.

I was provided this book through Blogging for Books, who got it from the publisher.
Posted by Jenny Colvin at 6:35 PM

Email ThisBlogThis!Share to TwitterShare to FacebookShare to Pinterest
Labels: bloggingforbooks, fantasy, review, YA