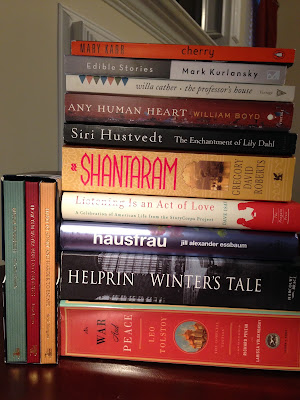 One Hundred and Forty Five Stories in a Small Box by Dave Eggers, Sarah Manguso, and Deb Olin Unferth
Cherry by Mary Karr
Edible Stories: A Novel in Sixteen Parts

by Mark Kurlansky
The Professor's House

by Willa Cather
Any Human Heart

by William Boyd
The Enchantment of Lily Dahl

by Gregory David Roberts
Listening Is an Act of Love: A Celebration of American Life from the StoryCorps Project by Dave Islay
Hausfrau

by Mark Helprin
War and Peace

That's a lot of books! My poor shelves! But I was helpless to prevent this from happening. It all started when I had Labor Day off and decided to go to Asheville. I visited a new donut place and Mr. K's Used Books because I had over $40 in credit there from the Greenville store, but had never seen the one in Asheville. I think of Asheville as a very literary place and was not disappointed by what I found - a tiny box of tiny stories, a book on storytelling, and the translation of War and Peace that I've been looking for. I had started W&P in the summer of 2013 with a group, but had downloaded the Kindle version. It required flipping back and forth between the text and French translations, the text and copious footnotes provided by the stellar translating team of Pevear and Volokhonsky. It was just too hard to get through as an eBook and I craved the print, but didn't want to buy it new. This copy is in great shape and I think I will get back to it eventually. At this point I will probably have to start again. Anyway, those three books didn't cost me a thing other than books that I had previously traded in.

A few weeks later, my husband and I were heading home from Hendersonville, NC, when I saw a sign with my siren song: 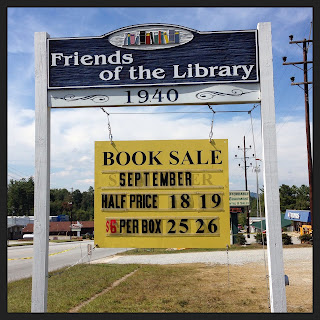 Book sale, check. HALF PRICE? CHECK. And half price was so cheap you would not believe it. I got the Karr, Kurlansky, Hustvedt, Roberts, Essebaum, and Helprin for less than $6 total. One of those books was recent, hardcover, and was in perfect condition. The others were in great shape and didn't seem as if they'd ever been read. This sale happens at a building that permanently houses the Hendersonville Friends of the Library, so they are able to organize the books on permanent shelves rather than just spilling them out on tables like some book sales do. My only complaint is that they only took cash, which I rarely have on me. I'll know for next time! The Shantaram was discussed on Episode 028 of the Reading Envy Podcast, I had previously read a book by Hustvedt, I had tried but failed to read Lit by Mary Karr but wanted to give her another chance, and the others were just books I was interested in. I think I thought I was buying the same book by Helprin that I'd once started and had to return, but I'm seeing now that it isn't the same title. I might not keep that one for very long.

The Cather and Boyd have a more unique story - I've recently become a listener of a few podcasts by readers - The Readers and Books on the Nightstand. The four hosts of the two podcasts were planning a readalong discussion at Booktopia Petoskey - each host picked a favorite book. I had previously read two of the selections - The Sparrow by Mary Doria Russell and Rebecca by Daphne du Maurier, but I had never read The Professor's House or Any Human Heart. I plan to read both before listening to that discussion. Coincidentally, I am so sad not to know of Booktopia when it happened close to me in Asheville, NC.  There is one location left in 2016 and the tickets are already sold out (!!!).  It is lovely to see a community of readers get so excited, just wish I'd been more aware so I could have participated as well.