Reading in Place - Florida, the Bahamas, and At Sea

When I travel, I always make an effort to read something related to where I am.  Sometimes those connections are a bit of a stretch, but it can be a fun challenge.  Earlier this month, my husband and I went to Florida for maybe the tenth time, and the Bahamas for the third time.  For Florida, I had previously tried reading Shadow Country by Peter Matthiessen, but I wasn't in the mood to go back to it.  Plus it is in the "wrong" part of Florida, set around and in the Everglades.  I was headed to northern to mid eastern coast of Florida. We would be staying in Vilano Beach, right outside St. Augustine before heading south to Port Canaveral to get on a ship.

It was my plan all along to finish Jeff VanderMeer's Southern Reach Trilogy while in Florida, and had been holding on to Acceptance (#3) until I was there.  Now, the setting of the trilogy is technically "Area X," which may or may not be near Florida, but I felt like it was as close as I could get! It was a perfect read for our few days in Florida.  It was cold there, empty, and between the actual landscape and the setting of the book, I wandered Area X in my dreams. 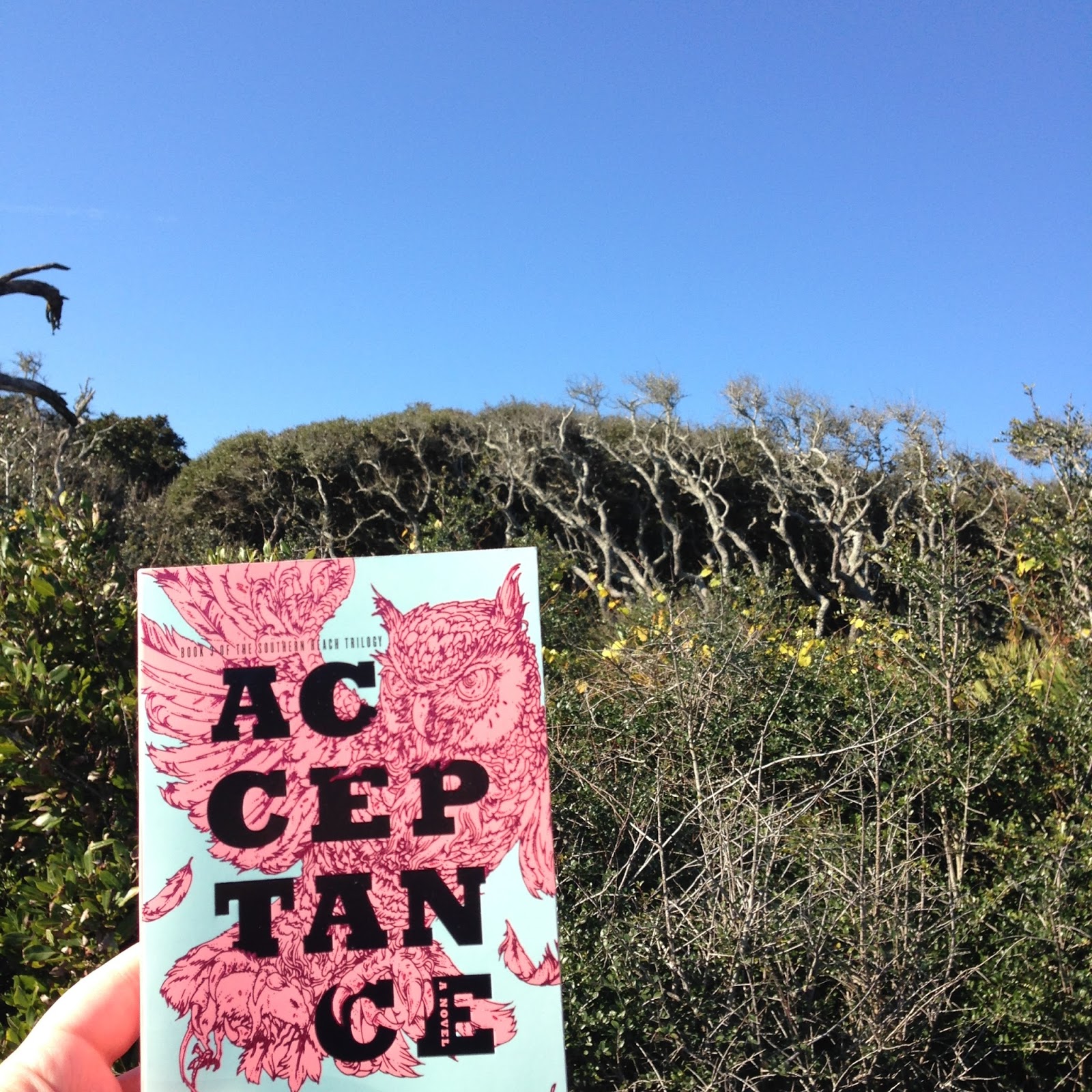 "This island is about fourteen miles long, six broad, and forty in circumference, containing what I would estimate as about eight-four square miles or more than fifty thousand acres. The pine-and-oak forest comprises most of the interior, sprawling down toward the shore on the landward side, but the side facing the sea has been assaulted by storms, and there you will find mostly scrub and moss and gnarled bushes."

Another book I kept coming across in my searching was Continental Drift by Russell Banks, which travels from Florida to the Bahamas and dips into New Hampshire and Haiti as well.  Not only is it set in the Bahamas, it is specifically set in Nassau, where we were headed.  This novel has some voodoo in it but also a lot of the author's experience, and he captures the feeling of Nassau in the language and entrepreneurial spirit. 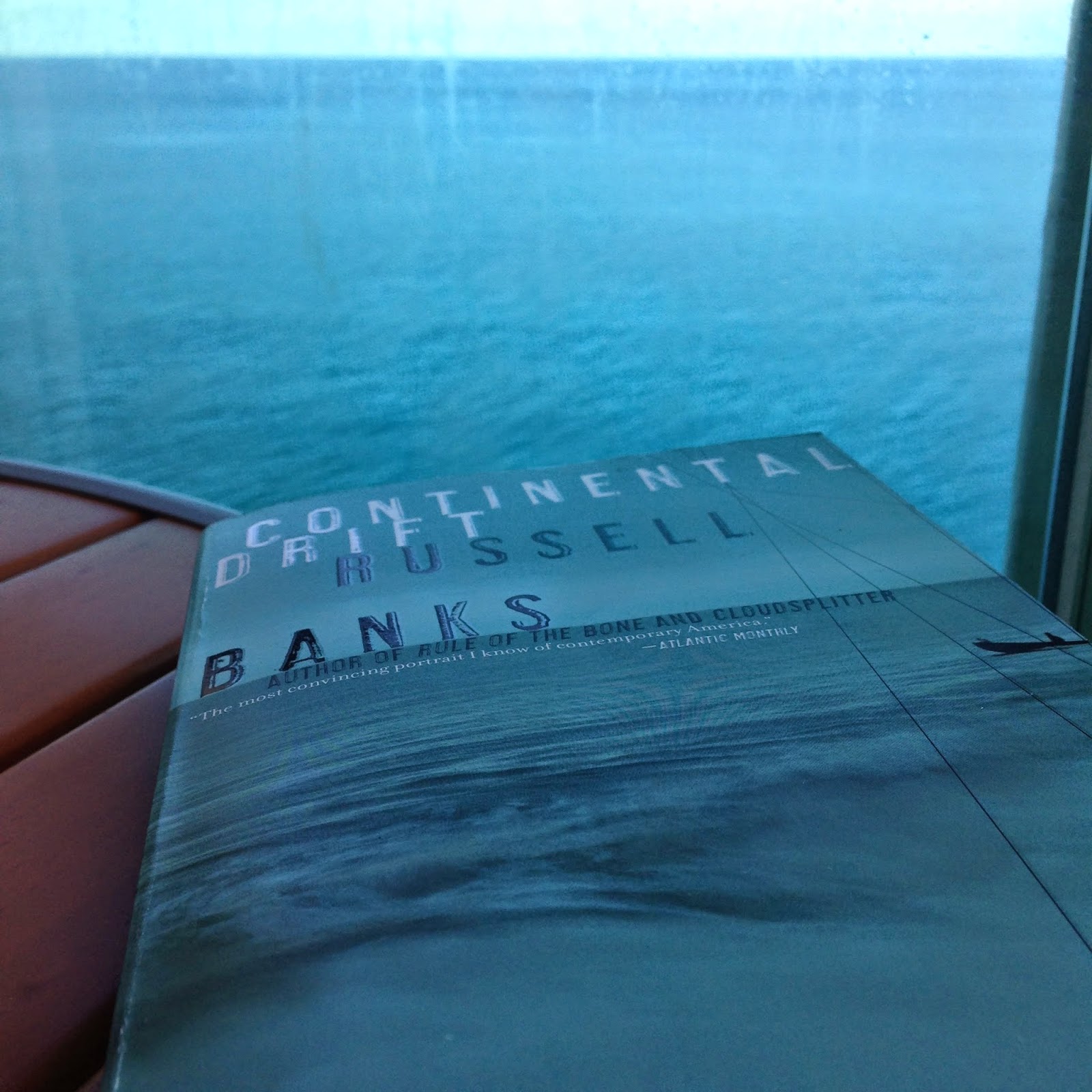 "A few miles west of Elizabeth Town, the road dips and slants toward the sea before it makes the bend at Clifton Point and curves back along the north side of the island to Nassau, and from the road, the land on both sides seems empty... The bougainvillea, cassia trees, mahoe and annatto, a tangled weave of flower, thorn and hardwood, rise up like a hedgerow and block the human life and cultivation that go on there from the sight of passersby - tourists in rented cars, teenagers on motorbikes, policemen from Nassau in their Toyotas, air-conditioned tour buses filled with peering, pink-skinned ladies and gentlemen from the continent."

This little passage made me laugh because while in Nassau we were on a bus where the driver intentionally went the wrong way down a one-way street, forcing people off the sidewalk, insisting, "It's my choice." So I suppose I was a pink-skinned lady from the continent. I didn't read this book in Nassau, but on the ship, before and after. Other books I considered bringing with me for the Florida-Bahamas connection are the Travis McGee crime novels by John MacDonald.  I had one on the way to me via Paperbackswap.com but it didn't make it in time.  Most of the other books I have found set in the Bahamas are travel memoirs, such as Boat Girl, which is decent but not great.

Not finding a lot specific to my places, I expanded my search to the Caribbean and just ocean-themed reads.  I had exhausted many of the Caribbean novels I knew of, from The White Woman on the Green Bicycle to Krik? Krak!  Many of the novels set in the Caribbean are written by native authors, which I always prefer, but they were specific to an island other than where I was headed.  I prefer to save those until I end up in those places!

On my shelves of science fiction and fantasy books, I had a few fantasy novels by female authors that I had not yet read, having to do with the ocean (and in the end, they shared a far more specific theme that would be giving some things away!).  The New Moon's Arms, by Nalo Hopkinson, is set on an imagined Caribbean island. The author is from Jamaica and has lived various places in the Caribbean and Canada, and I really liked her novel Sister Mine.  I started with the Hopkinson, and them moved to Singer from the Sea by Sheri S. Tepper.  This one was a much farther ocean, on the planet of Haven, and the main character (whose name is Genevieve or Jenny) has an unexplained (at first) connection to the sea.  This was a perfect book to read while the ship was moving through the water, sitting on a balcony with the ocean breeze ruffling the pages.  I liked mixing fantasy novels into my place-based reading.  It still worked! 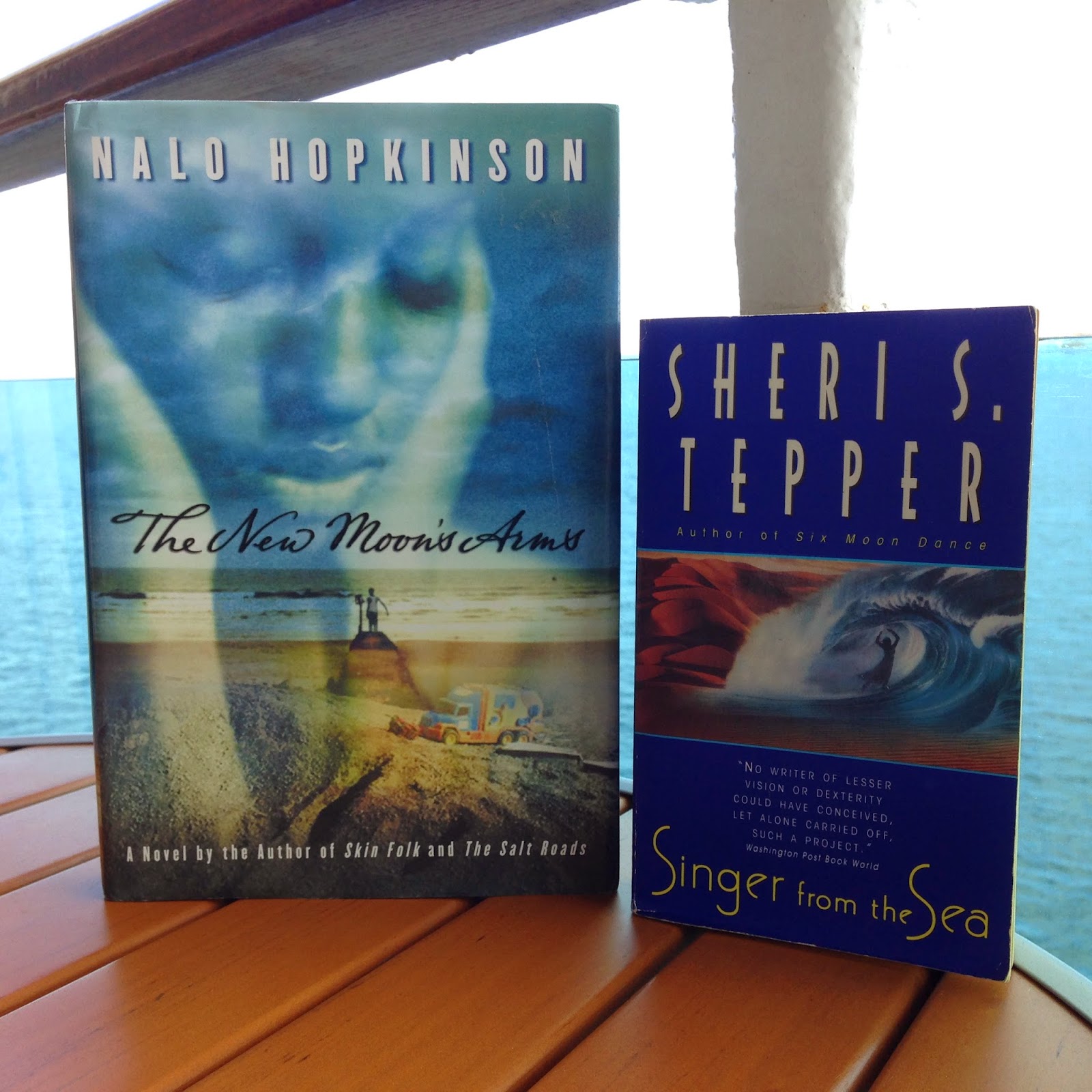 "At this season the terrace tops were furred with golden stubble, horizontal lines of brightness against black rock that towered above ice-glittering, echoing fjords. The journey was mesmerizing. Here great waves swept over the reefs between the islands, sometimes a gentle susurrus of ripples, sometimes great shouting geysers of spray that erupted from blow holes on the lagoon side. As nowhere else in Haven, here was the feel of the great sea, the presence of it, the push and sway of it, and so Garth said, the threat of it as well." - Singer from the Sea