The End of the Affair

Stories Read:
"The End of the Affair" by Graham Greene 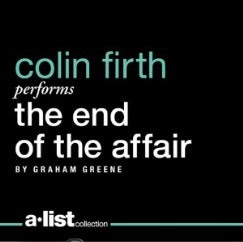 This one is on my novella list. It pushes the definition of "novella", for certain. The Penguin edition softcover I have runs 191 pages, and the audio version I have was 6.5 hours long.

That audio version, by the way, was as good as it gets. I was reading it in print, but had a two hour drive ahead of me. I was engrossed and didn't want to stop reading, so I looked it up on Audible. I am so glad I did that! They have a version of it in their A-List collection, read by Colin Firth. It's been a long while since I was this enthralled with an audiobook. The narrative style is perfect for reading aloud, and Colin Firth was an inspired choice to narrate. I did not pick up the print version again. 5 stars!

There was a lot of Catholic stuff in this short novel, which interested me greatly. Wikipedia says: "The End of the Affair is the fourth and last of Greene's explicitly Catholic novels." It doesn't list the other three, but I'll seek them out when I'm finished reading this list of novellas.

There are also two film versions of the book, and I know I contradict myself when I say that I'd like to see them, especially the 1999 film with Ralph Fiennes and Julianne Moore. I'm not sure what to expect from these versions. I suppose the story could easily be bent to be a defense of the affair, as if we are all just helpless victims of the strong tides of our desires. The story is deeply reflective and extremely well-written. I can't imagine how those things would come across in film, and I wonder if the filmmakers succeeded.

My interest in the book was the characters, and their mindsets. How they justify things, how they know it must end, how their knowledge of the wrongness affects them, even as they try to convince themselves that it's right. How they think about God was especially intriguing. I was immersed from the first scene, which was a chance meeting between a man who had been having an affair with his mistress's husband, who suspects a thing or two.

I know next to nothing about Graham Greene, which is part of the fun of reading lists. I liked this quite a bit.

Next on the novella list is "The Alchemist" by Paolo Coelho. On the short story list, I have Vance, Wolfe, and Hamilton!