I can't believe it's time already for the monthly library book roundup! I feel like I haven't had time to breathe in the last few weeks, much less go to the library. Good thing I work at the library or I might never go. 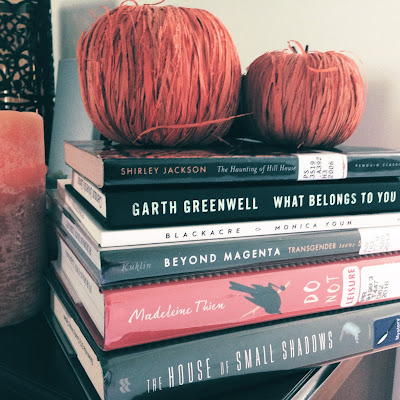 The Haunting of Hill House by Shirley Jackson
What Belongs to You by Garth Greenwell
Blackacre by Monica Youn
Beyond Magenta: Transgender Teens Speak Out by Susan Kufkin
Do Not Say We Have Nothing by Madeleine Thien
The House of Small Shadows by Adam Nevill

Not pictured:
Am I Blue? Coming Out from the Silence edited by Marion Dane Bauer
Blue Laws: Selected and Uncollected Poems, 1995-2015 by Kevin Young
Jimmy's Blues and Other Poems by James Baldwin
Letters Composed During a Lull in the Fighting: Poems by Kevin Powers
Jack of Spades by Joyce Carol Oates
A Month in the Country by J.L. Carr
The Organized Mind: Thinking Straight in the Age of Information Overload by Daniel J. Levitin

I checked out the Jackson, Nevill, and Oates for Spook/Book/Scare-tober reading. Greenwell, Youn, and Young all came home with me because they were longlisted for the National Book Award while the Thien is shortlisted for the Man Booker Prize.

The Kufkin and Bauer were for Banned Books Week, Baldwin and Powers were library eBooks in a hunt for recent poetry, Carr was a whim after seeing it posted in Litsy, and the Levitin is a book I requested my library to order after someone referenced Levitin a bunch in a presentation I found interesting.

Phew! What do you have on your library pile?
Posted by Jenny Colvin at 9:52 PM