This post is brought to you almost entirely by one reading rabbit hole and one prize long list. 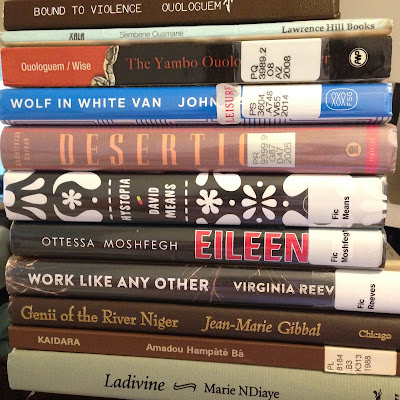 Bound to Violence by Yambo Ouologuem
Xala by Sembene Ousmane
The Yambo Ouloguem Reader by Yambo Ouologuem
Wolf in White Van by John Darnielle
Desertion by Abdulrazak Gurnah
Hystopia by David Means
Eileen by Ottessa Moshfegh
Work Like Any Other by Virginia Reeves
Genii of the River Niger by Jean-Marie Gibbal
Kaidara by Amadou Hampate Ba
Ladivine by Marie NDiaye
(not pictured: Akata Witch by Nnedi Okorafor)

I recently read Walking with Abel by Anna Badhken, which tells the story of one group of Fulani cowboys in their annual nomadic journeys in Mali. She had done a lot of research and I ended up adding a lot to my reading list, some of which I brought home. Although I haven't read any of it, that is why I have the two Ouologuem titles, the Gibbal, and the Ba.

The Man Booker long list was announced in July, and I checked out what my public library had available - the Means, the Moshfegh, and the Reeves.

I checked out the NDiaye and Gurnah for some Goodreads readalongs, the Ousmane for my Africa2016 project (although I'd previously read a book set in Senegal), the Darnielle because I started seeing his upcoming book in Litsy and realized I never read the last one, and the Okorafor after seeing her read from its sequel.
Posted by Jenny Colvin at 12:00 AM