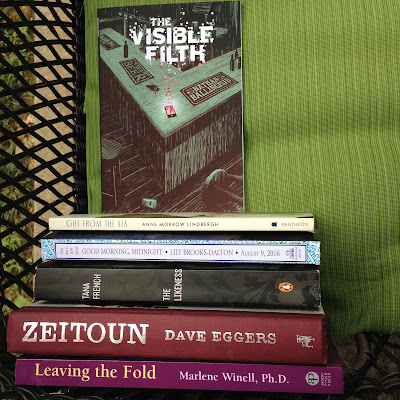 The Visible Filth by Nathan Ballingrud
Gift from the Sea by Anne Morrow Lindbergh
Good Morning, Midnight by Lily Brooks-Dalton
The Likeness by Tana French
Zeitoun by Dave Eggers
Leaving the Fold by Marlene Winell

I purchased the Ballingrud, French, and Winell from Amazon, for entirely different reasons! I had recently acquired French #3 and #4 at a used book sale, previously read #1, and wanted to remedy missing a volume, so just bought a random used copy that I could use Amazon Prime to ship. Ballingrud of course has been on my podcast and I would have ended up reading this one, but then he was nominated for an award, and I wanted to read it sooner rather than later! The Winell is for my own personal journey, about dealing with a past laden with fundamentalism.

I staged a readathon for my Reading Class and one of the things we did was have a book swap. I snagged the Eggers and Lindbergh from the table - I actually don't want to read the Eggers but it was on the nomination list for my book club, and I thought if it ended up on the list I might as well have a copy! I know I've heard about the Lindbergh but can't exactly remember in what context. Probably a quick read.

The Brooks-Dalton is a review copy from a publisher, a post-apocalyptic novel featuring an astronaut and a scientist. It sounded kind of like a less funny version of that tv show, Last Man on Earth. I was up for it!
Posted by Jenny Colvin at 7:59 PM