The pile was manageable and then I stopped at the Friends of the Library Book Sale for the Greenville County Public Library. I've lived in Greenville County ten years but this was the first time at this book sale. I will add it to my rotation now! I ended up with several memoirs and other books I've been wanting to read, only one I had read previously. I have some other books in this pile from other places, so I will explain more below! 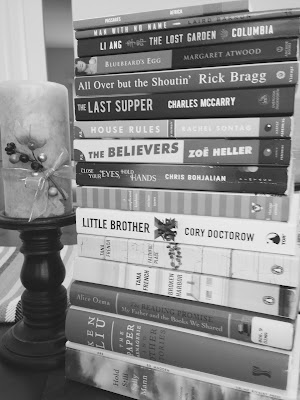 Passages: Africa edited by Antonio Aiello and Billy Kahora
Man with No Name by Laird Barron
The Lost Garden by Li Ang
Bluebeard's Egg: Stories by Margaret Atwood
All Over but the Shoutin' by Rick Bragg
The Last Supper by Charles McCarry
House Rules by Rachel Sontag
The Believers by Zoe Heller
Close Your Eyes, Hold Hands by Chris Bonjalian
A Complicated Kindness by Miriam Towes
Little Brother by Cory Doctorow
Faithful Place by Tana French
Broken Harbor by Tana French
The Reading Promise: My Father and the Books We Shared by Alice Ozma
The Paper Menagerie and Other Stories by Ken Liu
Hold Still by Sally Mann

I recently contributed to a PEN America kickstarter campaign that will work to bring additional translations of literature from other places to our publishing industry. Part of my donation came with the gift of Passages: Africa and the Ang.

The Barron and the Liu were recent wins in Goodreads giveaways.

The rest are from the book sale - Atwood because I always snag a book by her if I haven't read it yet, the Bragg because it seems like an important southern work, the McCarry because I recently read a book by him and really enjoyed it, the Sontag because it sounded like a memoir that might cover some familiar ground, Heller & Bonjalian because I've always meant to try them, Doctorow because I've read that book a million times but want to own the paperback, French because I read the first one and wanted to keep going, Ozma because it seemed related, and Mann because it was a finalist in nonfiction for the National Book Award in 2015.