Vacation, Bailey's Prize shortlist, and other random reasons to get books from the library! 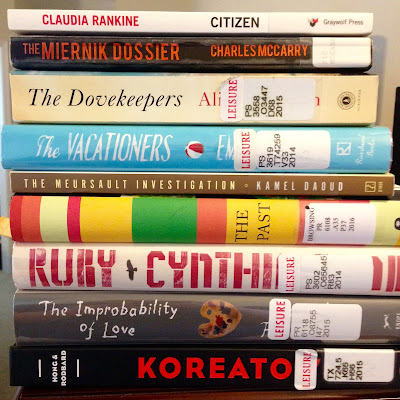 Citizen: An American Lyric by Claudia Rankine
The Miernik Dossier by Charles McCarry
The Dovekeepers by Alice Hoffman
The Vacationers by Emma Straub
The Meursault Investigation  by Kamel Daoud
The Past by Tessa Hadley
Ruby by Cynthia Bond
The Improbability of Love by Hannah Rothschild
Koreatown: the Cookbook by Deuki Hong and Matt Rodbard

When we went on vacation a few weeks ago, I went impulse book picking at the library. I brought home the Straub (which I read in the low country) and the Hoffman (which I didn't.) The Daoud was a pick earlier in the year of one of my book groups, but it took a while for my library hold to come in and I had to read The Stranger first. I checked out the McCarry on a whim, after reading a review for a book later in the series.

The Bailey's Women's Prize for Fiction shortlist was announced earlier this week. I had already read A Little Life by Hanya Yanagihara and The Green Road by Anne Enright. At the library I found two more (which I probably ordered) - the Bond and the Rothschild. Koreatown was just sitting there begging to come home with me, and the Rankin I requested from interlibrary loan (also ordered a copy for our library to have later.)

The Hadley is the first group read of a new reading group I joined in Goodreads, which focuses entirely on super recent (as in published this year or last year) literary fiction. I'm looking forward to it!
Posted by Jenny Colvin at 3:09 PM