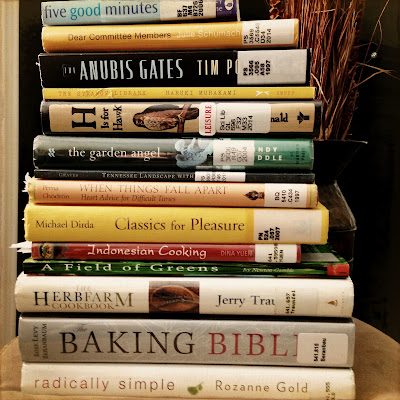 Five Good Minutes in the Evening: 100 Mindful Practices to Help You Unwind from the Day and Make the Most of Your Night by Jeffrey Brantley
Dear Committee Members

by Julie Schumacher
The Anubis Gates

by Tim Powers
The Strange Library

by Haruki Murakami
H Is for Hawk

by Helen MacDonald
The Garden Angel

by Ivy Newton
The Herbfarm Cookbook

by Jerry Traunfeld
The Baking Bible

This looks like a giant list but I have reasons for all of these! Actually one day I was looking at my bookshelves in Goodreads, namely my to-read shelf, and noticed I had quite a few cookbooks on there.  I decided to go ahead and get a handful from the library so I could take a look and get them off my to-read list. I have made one noodle dish from the Indonesian cookbook and one dinner from the Gold, but haven't even peeked inside the others yet.

Only one of these books is for a book club, although two started out that way. The Graves is one of the picks in my Southern Literary Trail group and since I was not going to read Go Set a Watchman I thought I could at least read some poems. I was pondering joining a local book club about classics, which is why I got the Dirda, for research! I ultimately decided I didn't really have the capacity to join another monthly book club, and also I wasn't overly excited by the classics idea. I think I just like book clubs. I may finish skimming that book but may return it unfinished.  I like Michael Dirda and recently enjoyed a review copy of his upcoming book, Browsings, a compilation of his book columns (not reviews) from the Washington Post.

Many many friends have waxed eloquently about the MacDonald so I want to give it a try, despite feeling no particular interest in hawks. Heck, I read an entire David Foster Wallace novel about the IRS, so I clearly will read about anything.  I checked out the Friddle because she is a graduate from the university where I teach, and will be on campus as an adjunct this semester. It looks to be similar to Sarah Addison Allen and Sarah Hoffman, which I enjoy from time to time.

The Chodron and the Brantley are all connected to my newly forming interest in mindfulness and contemplative pedagogy. The Brantley is hands on and the Chodron is a bit overly steeped in Buddhist jargon for me, but still has such great moments! That's one I'll end up buying so I can have it on hand.

A professor here recommended the Schumacher to me, and as she guessed, I laughed my head off; the Murakami I decided to read after listening to the audio and not quite getting to it - definitely not my favorite from that author. The Powers I got in anticipation of a podcast discussion (posting mid-September, recorded Thursday night) but I was overly optimistic about the amount of time I would have to read.

Have you discovered anything interesting at the library lately?
Posted by Jenny Colvin at 12:00 AM