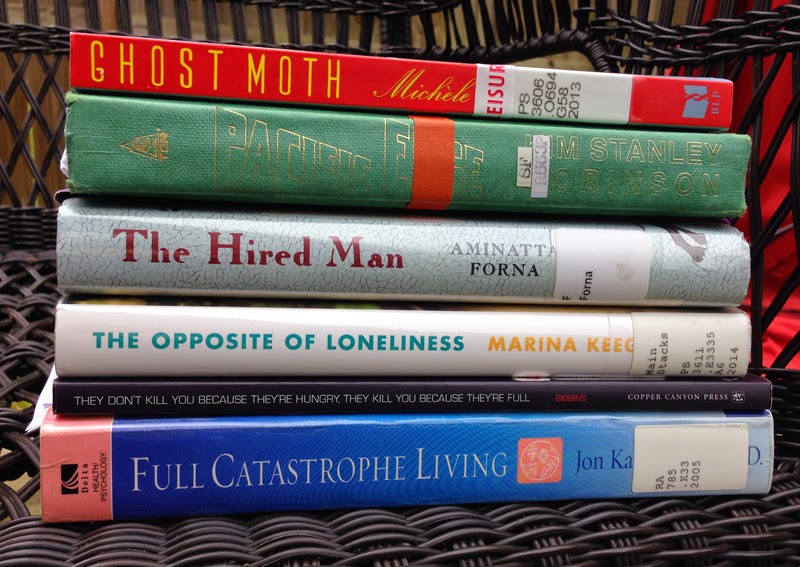 by Aminatta Forna
The Opposite of Loneliness

Even though I was in Oregon for two of the last four weeks, I still managed to bring a bunch of books home from the library. This isn't even counting the rather steep pile of new recordings of storytelling that were ordered for my upcoming Storytelling class, all waiting for me in my office.

Of these six books, I have already read three! The Bibbins was my first poetry read of National Poetry month (and will be discussed on the next podcast episode). I read the Robinson for the SFF Audio podcast readalong episode. We will record our discussion on Sunday but I think it won't post for a few weeks after that. I read the Forbes in planes, trains, and hotel rooms during my conference (you can read my review in Goodreads) - it was lighter than I expected, both in content and weight!

The Forna was a replacement selection for my in-person book club, and looks to be a recent book set in Croatia. The Keegan got a lot of attention, a book of essays and stories by a new promising author who died in a car accident a few days after graduation. The Kabat-Zinn was the result of doing a search on mindfulness and grief after my dog died. I probably will return it to the library unread but it might be a better idea to read it!

What did you bring home from the library this month? Give me more to envy.
Posted by Jenny Colvin at 10:46 PM