I am really reading a lot of non-fiction this year!  In the entire list of library books I have brought home or downloaded in the last month, only one is a novel. 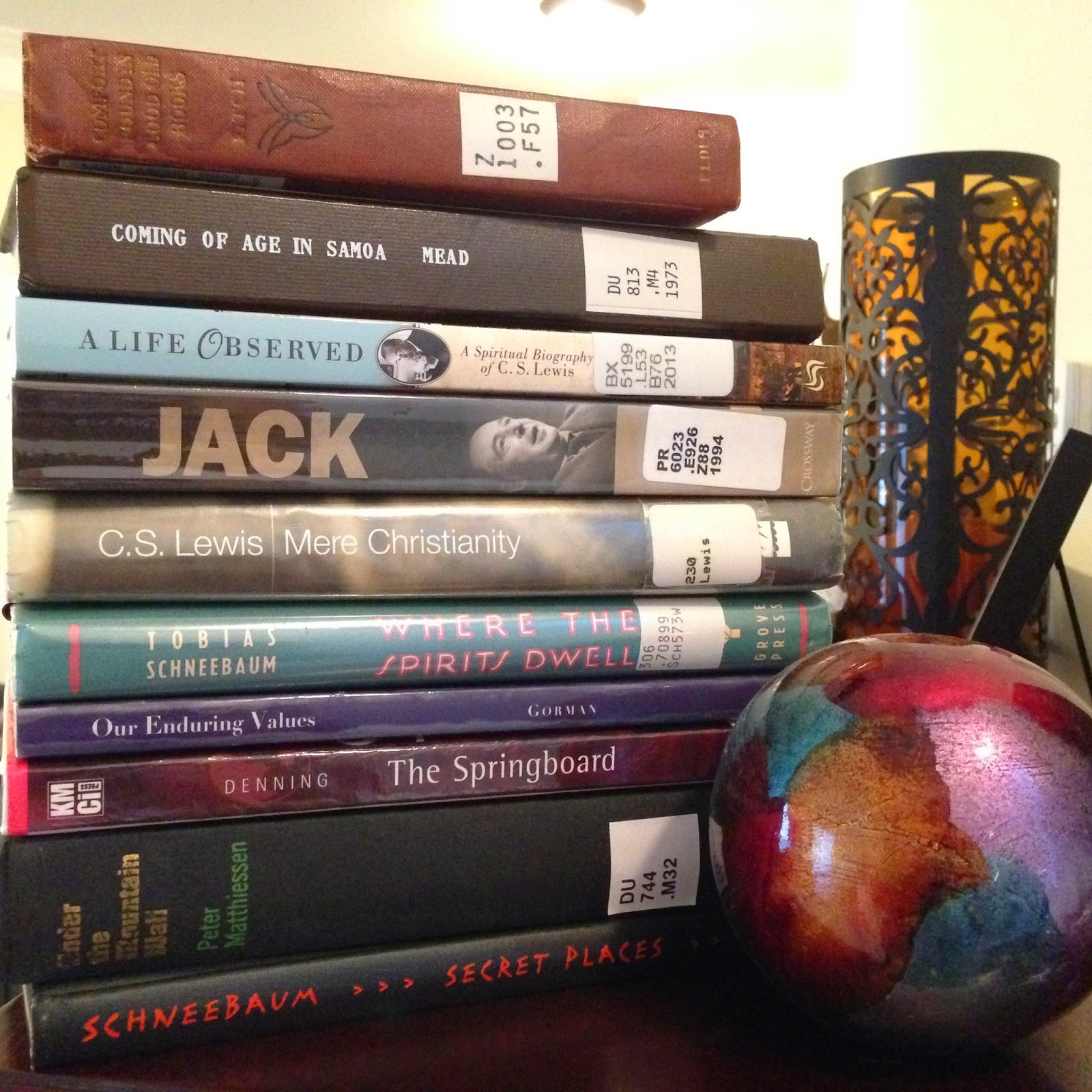 Comfort Found in Good Old Books by George Hamlin Fitch
Coming of Age in Samoa by Margaret Mead
A Life Observed: A Spiritual Biography of C.S. Lewis by Devin Brown
Jack: a Life of C.S. Lewis by George Sayer
Mere Christianity by C.S. Lewis
Where the Spirits Dwell: an Odyssey in the Jungle of New Guinea by Tobias Schneebaum
Our Enduring Values: Librarianship in the 21st Century by Michael Gorman
The Springboard: How Storytelling Ignites Action by Stephen Denning
Under the Mountain Wall: A Chronicle of Two Seasons in the Stone Age by Peter Matthiessen
Secret Places: My Life in New York and New Guinea by Tobias Schneebaum

In my work as a librarian, I work with many First Year Writing seminars.  This semester I have two with C.S. Lewis as a topic. I had read the Chronicles of Narnia and some of the planet trilogy, but never any of Lewis's non-fiction.  The students I am working with are reading quite a bit of his theology alongside biographies on Lewis, so I picked up a few of those titles (Brown, Sayer, Lewis.)

More New Guinea books have found their way home with me - Schneebaum x2, and the Matthiessen. I won't be reading about Samoa until another month but it was just sitting there near the Matthiessen, whoops.

Another book that I brought home because it appealed to me from the shelf is the Fitch - it was near the book on librarianship by Michael Gorman.  It seems to be written because a father's son died, and his son loved to read, so he re-reads and writes about some of the classics.  I might not read it but it is over 100 years old with hand-attached illustrations.  Beautiful!

Both the Gorman and the Denning were brought to my attention because of a MOOC I'm participating in - Library Advocacy Unshushed.  I've been getting a lot out of it, not to mention an epic reading list.  The Denning may also be useful for my Storytelling class, if enough people sign up for it. I like to include elements of "applied" storytelling.

The Miéville was a book club selection, and luckily the public library had it as an eBook!
Posted by Jenny Colvin at 3:00 AM