I stuck with my story list this week, and loved how it turned out. All four stories shared a theme and a broad setting. The theme? Love. The setting? A dystopian future Earth.

"Mazirian the Magician" is the first story in Jack Vance's The Dying Earth series. I believe the first volume (that goes by two titles, The Dying Earth or Mazirian the Magician) is the only volume in the series that's a collection. The rest are novels. Someone please correct me if I'm wrong on that. This is a science fantasy, which I define as a story set in a far future where much has been forgotten, and magic and science are indistinguishable. A jealous Mazirian hunts a "woman-creature" but can't catch her. The woman-creature is a product from the vats of Turjan, who Mazirian has shrunk and placed in a maze with a tiny dragon. Can a deal be made with Turjan to deliver the prey?

A taste of Jack Vance's style, which I enjoyed:

Mazirian unlocked the threebare except for a stone pedestal supporting a glass-topped box. The box measured a yard on a side and was four or five inches high. Within the box — actually a squared passageway, a run with four right angles — moved two small creatures, one seeking, the other evading. The predator was a small dragon with furious red eyes and a monstrous fanged mouth. It waddled along the passage on six splayed legs, twitching its tail as it went. The other stood only half the size of the dragon — a strong-featured man, stark naked, with a copper fillet binding his long black hair. He moved slightly faster than his pursuer, which still kept relentless chase, using a measure of craft, speeding, doubling back, lurking at the angle in case the man should unwarily step around. By holding himself continually alert, the man was able to stay beyond the reach of the fangs. The man was Turjan, whom Mazirian by trickery had captured several weeks before, reduced in size and thus imprisoned.


It's clear that Vance was an influence on Gene Wolfe. 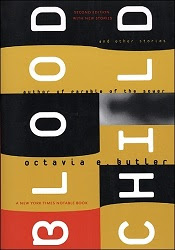 Next is "Speech Sounds" by the great Octavia Butler. In an afterword to the story, Butler says that it "was conceived in weariness, depression, and sorrow. I began the story feeling little hope or liking for the human species, but by the time I reached the end of it, my hope had come back. It always seems to do that."

The setting reminded me a bit of her "Parable" novels. Post-apocalyptic, lawless, yet society keeps trying to move. The opening scene takes place on a bus: an argument between two men, both unable to speak, building up to physical confrontation while the other riders worry for their safety. This was a deserving Hugo winner for Best Short Story in 1984. (NOTE: Parable of the Sower by Octavia Butler is the next book up for discussion over at A Good Story is Hard to Find. It will be posted on March 21.) 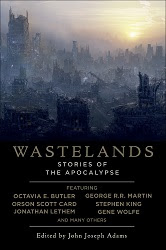 Third up is "The People of Sand and Slag" by Paolo Bacigalupi. I found this in Wastelands, edited by John Joseph Adams. It deals with some genetically modified guards whose job is to protect a mine from intruders. Finding a dog in the mine is a surprising event because (1) no one has seen a living dog for long long while, and (2) how it could survive in the toxic environment of the mine? The discovery turns the thoughts of the guards inward, at least for a while.

Last this week is the best of them all. "The Only Death in the City" by C.J. Cherryh. What a story this was. I added the collection Sunfall to the story list after finding it on this list of Best SF Collections. I saw it there, I haven't read anything by Cherryh, ever, so I added the stories to the list. I'm glad I did! If this one is any indication of Cherryh's talent, I'll be reading plenty of her in the future.

Sunfall is a collection of related stories set in a far future where Earth is a wasteland but some cities still exist and have for thousands of years. This first story is set in Paris, which is walled and consists of levels. They keep building down, down as needed to make room for the living. A beautiful passage:

No one remembered the outside. No one cared. The City was sealed, and had been so for thousands of years. 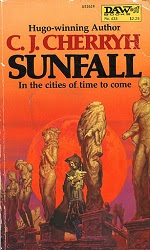 The inhabitants of the city experience reincarnation. Shortly after you die, you are born again in another part of the city. Children announce who they are when they are a year old, and they remember all their past lives, so they are essentially immortal. Into this world is born Alain, who has not been born before. His mother tells him that no matter how long he lives, he'll always be a youth compared to a woman he's fallen in love with. But that doesn't stop him. He plunges ahead, despite the warnings.

Truly a great story, beautifully written, my favorite so far this year. I look forward to the rest of the collection. There are 5 other stories in there:

Next up on the list: "Good News from the Vatican" by Robert Silverberg. Ha! Great timing.