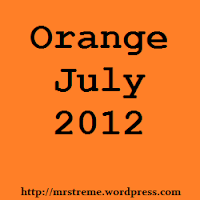 For Orange January, I managed to make it through four Orange Prize books, two that I also counted for my Around the World Challenge.

When I was in the Caribbean in May, I also managed to read another Orange book - The White Woman on the Green Bicycle, which is one of the best books I've read all year.
For Orange July, I have several titles from the various Orange lists that are currently on my shelf.  I know I'll read at least one, but I'm not sure where to start.  Do you see anything pictured below that you would recommend first?  I'm pretty set on saving American Wife for 2013 (when I'll be doing an Around the USA reading challenge), but other than that I'm open.